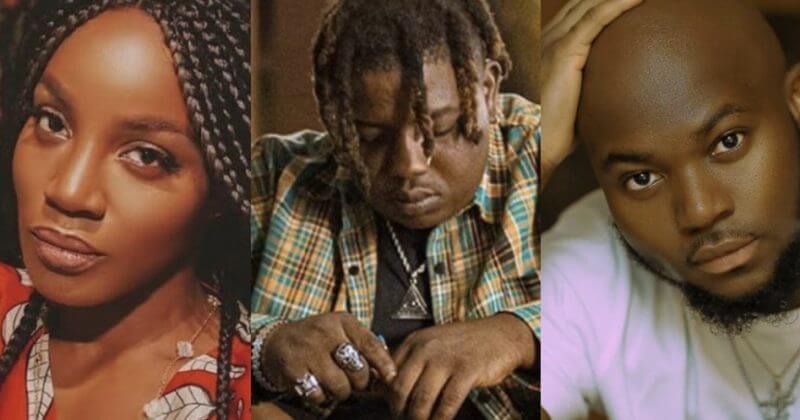 Last weekend was one for the books with the number of new songs and projects from our faves; The Cavemen, Fireboy DML, Cuppy, Nasty C, Blaqbonez, Tomi Thomas, Falz amongst others shared new songs that we analysed here. To set the ball rolling for this new week, we have new releases from Barry Jhay, Seyi Shay, Zlatan, Ycee and Small Doctor, Solana and Joeboy, Mr Eazi and King Promise and more. Enjoy

Barry Jhay’s debut single, “Aiye” introduced him as an exceptional singer who infuses his Yoruba lyrics with heartfelt inspection. He continued in the same vein for his debut project, ‘Barry Back’, where he offered more Yoruba-fueled songs that resonated somewhere between solemn introspection and motivational-speak. He has just released the music video for the project’s second track, “Ashe She”.

“B’ota gbogun, bo binu/Mo mo pe alanu n be leyin mi oh/ And anything wey I lay my hands on/ Moni mo mo wipe ashe she”, he sings as he confesses of his faith in God over the catchy beat produced by Tee-Y . The video directed Director K highlights Barry Jhay’s traditional spirituality with the opening scenes shot at a Yoruba shrine. Though we also see shots of him praying at a church and later, outdoors with an occultic group, it’s hard to tell if there’s any narrative to follow. However, with Barry Jhay’s lyrics encouraging listeners to remain steadfast in their faith, the religious imageries are thought-provoking.

Seyi Shay has had many highlights in her career since she first broke out with “Murda” in 2014.  For her latest single, “Tuale”, she’s giving thanks to everyone whose support over the years has made her career possible. “Tuale for my people wey sabi/ Tuale for the person wey dey make my song a hit”, she sings over the upbeat instruments and she also gets some friends, Ycee, Zlatan and Small Doctor to weigh in as well. They each deliver compelling verses narrating how their music career made them into celebrities and expressing their gratitude to the fans, good and everyone who made it possible.

The video directed by Mr C takes Seyi Shay to the streets where we see her enjoying her time on the streets. Though Ycee doesn’t show up in the video, we see Zlatan and Small Doctor recording their vocals as well as dancers who confirm the groovy effect of the beat.

Joeboy fans have Solana to thank for giving them a new Joeboy verse sooner than expected. The two make a convincing pair on the romantic record, “Far Away”. Produced by Killertunes, the lightweight harmonies make the perfect backing for their hearty confessions addressed at their unfaithful lover. To a passive listener, the sweet melodies from Solana and Joeboy suggest that “Far Away” is just another valentines day ballad, however, the lyrics reveal the love they explore to be messy, carnal and risky. The soothing harmonies disguise the anxiety of her pleas as she asks her lover to commit to their future together; “we’re about to make it forever oh/ The way that I feel is forever oh”. On the track, Joeboy plays the boyfriend who is trying to be the best partner he can be, so he confesses his romantic feelings and promises to always be the loving boo, while Solana comes across as trying to mend a broken heart with these promises.

With the world isolating to stop the spread of COVID-19, a lot of businesses were put on hold while we figured out how to navigate the world on the internet. While some took this as an opportunity to relax, others—especially creatives with online platforms—found ways to keep pushing their products. Mr Eazi and his emPawa Africa team put out new music in June while we adjusted to the new normal and now they’ve put out the video for “Baby I’m Jealous”, the first single from the tape. The video captures the song’s producer, Guiltybeatz and artists, Ghanaian highlife star, King Promise, and Mr Eazi as they try to create from the comfort of their homes.

The video opens with a facetime conversation between King Promise and Guitybeatz discussing how they aim to promote the song and we get a candid portrait of their in-door life. We see Mr Eazi join in as well as they try to set up lights to shoot the video for the romantic song with their phones. The video is proof that the pandemic can’t really stop creativity, and awkward as it is, it’s fitting to the catchy song.

ICYMI: Catch up on all the songs releases from last week

Next Article NATIVE Exclusive: Black is King’s Papi Ojo wants to do more than dance