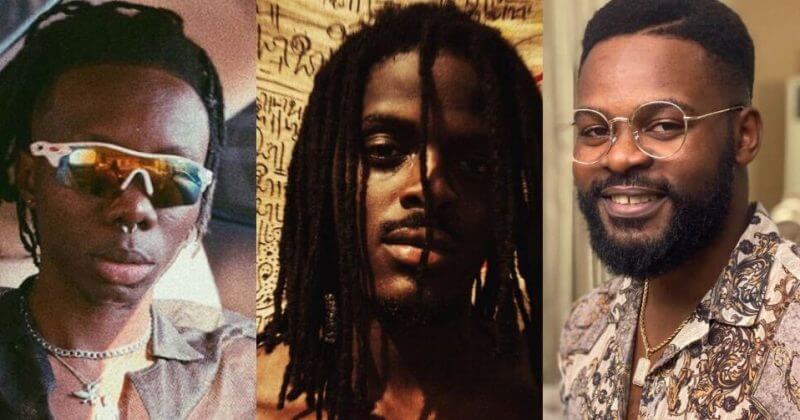 Coping with the chaos of 2020 has taught us how to have a good time even when conditions are less than ideal. A huge part of that lesson has come from music, as artists continue to provide songs that build our optimism, with their resolve to keep the party going through the pandemic and increasingly traumatic news feeds. That’s why we’ve decided to highlight the best songs released from around the world, thrice a week, in a bid to encourage that extra pep in your steps as you go through the rest of the year.

Earlier in the week, we got new music from WurlD, ADH, Vector, Eugy and PyschoYP, Ghanaian singer, Sista Afia and Fameye, BOLG and Jaiye. To get you in the mood for the weekend festivities, we’ve compiled a list of all the best songs released this weekend. Blaqbonez, Tomi Thomas, Falz, Nasty C, new Marlian Music signing, Tori Keeche and Naira Marley, Tulenkey and more. Enjoy.

Tomi Thomas‘ first taste of the limelight came through his role as a member of the LOS crew. However, since the group’s 2012 hit song, “Bad Guy P”, they’ve each pursued solo careers and Tomi has steadily grown into his own. He improved on his singing and is now renowned as one of the most captivating stage performers in the country. On his latest single, “Hopeless Romantic”, he reflects on his days alone and how his passion for singing gets undermined by those who don’t understand him.

The Caribbean leaning instrumentals for “Hopeless Romantic” are smooth, and the laidback arrangements allow for Tomi Thomas’ storytelling to shine. “It’s funny/ How they show me/ That they don’t know me/ I’m just a hopeless romantic”, he sings on the catchy chorus. And though the lyrics are simple and casual, his delivery is meticulous as his pitch falls and rises to match the intensity of his story. The accompanying video allows for more vivid narrating as we see him and his muse dressed like they’re prepared to go for a wedding.

Falz‘s most endearing talent is his sense of humor. Though he’s an accomplished actor and a convincing rapper, his jovial flair gives him an extra edge over others in his field of entertainment. His latest single, “One Trouser”, benefits from this as well with the comical depiction of a rowdy Lagos bus park.

The lyrics for “One Trouser” narrate the hilarious scene of a fight that broke out between Falz’s fictional character, Jimi and an Okada rider. Falz references popular motor parks like Surulere, Bode Thomas and Marwa Roundabout as the location of the accident and with his Falz the Bahd Guy accent, he delivers a convincing impression of a Lagos street fight, saying “Shebi we go enter one trouser”. The accompanying video directed by Dammy Twitch featured cameos from other comedians who fill up the busy street where the hilarious fight happens. Though the accumulation of accidents is exaggerated for humor, Lagos is the most populated city in Africa and the streets are indeed rough.

Naira Marley’s Marlian Music label unveiled their latest signing, Tori Keeche yesterday and have now shared her debut single, “Yoga”. Tori Keeche is the first female artist on the label and with her new single, “Yoga” she confirms that she isn’t just a placeholder as plays tag team partner with none other than the label boss himself.

Aided by the dancehall beats, Tori Keeche delivered matured lyrics on “Yoga” as she wields her sexuality confidently to describe how she’d like to have sex with her partner; “I stretch it out like Yoga”. The sex-charged direction of the song fits Naira Marley’s emo perfectly and because of that, he’s able to switch from the street-hop style to a more conventional Afropop style. With the catchy dance-driven beat and both artists going back and forth, promising to please their lovers, “Yoga” is a rapturous song that deserves a spot on all sex playlists.

Last time we heard from Tulenkey, he was lamenting the woes of the pandemic on “Corona”. Though the virus remains a threat till date, the anxiety attached to it has eased off a little and he’s now back with a celebratory new single titled “Link Up”. “Link Up” finds the Ghanaian artist singing and rapping in a mix of English and his indigenous language as he explains how he has been coping with recent events.

Singing “Forget the stress and party/ Stress no fit kill man/ Smoke all the stress away”, Tulenkey recommends using cannabis to get rid of the anxiety. The laidback instruments produced by MOG Beatz are designed for dancing and it’s sure to put listeners in the right mood as we enjoy the weekend festivities.

Fans continue to anticipate Nasty C’s upcoming project, ‘Zulu Man With Some Powers’ after the pandemic forced the South African rappers to delay the project’s release. However, he has continued to put out singles from the tape and the latest one, “Zulu Man” is the project’s title track.

Nasty C’s self-assured raps have earned him a reputation as one of Africa’s top hip-hop acts and the good people at Def Jam were impressed enough to sign him on earlier this year. Despite having the  attention of the whole world at the moment with this upcoming m project, “Zulu Man” finds Nasty C rapping mostly in his indigenous language, while his flow remains as impressive as ever.

Though Blaqbonez first earned his name as a battle rapper, his social media antics have given him the reputation of an internet troll who’s constantly poking fun at anyone who’s unfortunate enough to give him a reason. He took a pop turn for his debut single in 2020, “Haba” which he cheekily promoted insistently till it became infamous. For “Big Brother”, his second single release, Blaqbonez is reminding everyone of his rap prowess with no gimmick involved.

Though we won’t put it past Blaqbonez to find another amusing way to promote the song down the line, there‘s nothing whimsical about “Big Brother”. Rapping “Them no fit lock me inside no house now/ Cause me I dey for street, I’m getting guwap now”, “Big Brother” finds Blaqbonez bragging about his accomplishments while shading those who doubted him.

When you hear a song titled “Faded”, your expect the song to be about drinking too much alcohol, especially when it’s a trap song. You expect to be reminded of the drowsy feeling and pleasant numbness of partying hard. DOZ x Malik Bawa’s “FADED” doesn’t disappoint in capturing the faded mood. The producers’ psychedelic trap production creates a glassy-eyed backdrop for PsychoYP, Marc OTM, Denzel Oaks and Zilla Oaks to paint their various ideas of extreme partying.

The chorus goes “I’m faded off my drink” and then the beat drops, signaling the rappers to each take turns to add different eccentric details to the mosh pit. PsychoYP brags about his drip, Marv OTM raps about drinking and driving, Denzel Oaks talks drug money and Zilla Oaks closes with a drowsy flow that alludes to the Hennessy he tells us he has been drinking. As trap music grows more popular and mainstream, Nigerian trap artists are getting more comfortable and attempting to capture more ambitious moods.

ICYMI: Catch up on all the new songs released from earlier in the week