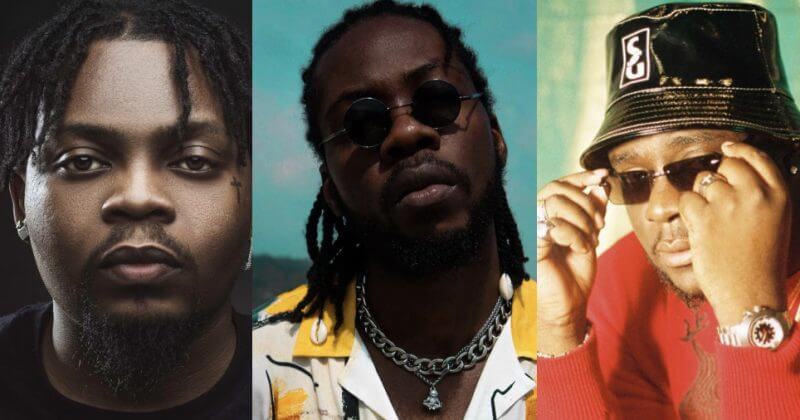 Songs of the day: New music from Ayüü, Olamide and Omah Lay, dndSection and more

It’s been a while, but we’re now back at it. In a month full of loss from COVID casualties to peaceful protesters being shot at it didn’t feel right to carry on like normal, so we stopped everything to give all our time to the pressing issues at hand, it’s still #EndSARS, but let’s also find a welcome escape from the bleak reality of the world.  Even though it’s all quite overwhelming to take in, music has provided a necessary escape, and throughout the year, musicians have continued to release music that motivates us as a return to normalcy no longer seems certain.

We know it can be difficult to keep up with all the diverse streams of music so we’ve created this column to keep you, our readers, up to date with all the finest tunes coming out of Africa and the rest of the world. These are the songs you absolutely need to hear. We’re resuming Songs Of The Day again to support artists who are providing momentary escape through these strange times, here are our favourite picks this Wednesday.

According to the TurnTables inaugural Top 50, Olamide and Omah Lay’s “Infinity” has been making rounds for the last 3 weeks. It certainly got a boost after someone being used as the soundtrack for a meme of the outgoing American president, Trump dancing, and now, the pair shared the official video for the standout track from ‘Carpe Diem’, Olamide’s latest project.

The video for “Infinity” was directed by Clarence Peters who also directed the previously released videos of tracks from the album, “Eru”, “Green Light” and “Triumphant”, featuring Bella Shmurda. For “Infinity”, Olamide, Omah Lay, and a few models are captured in several kaleidoscopic frames as the artists perform their sensual lyrics and dance to the grove of their melodies and the P.Priime-produced beat.

Ghanaian artist, TWITCH 4EVA has just shared the music video for “Chaskele”, one of the standout tracks from his recently released debut EP, ‘Lost’. The track produced by East London producer, Rayf finds TWITCH 4EVA at his genre-bending finest, bridging his coastal harmonies and indigenous Ghanaian dialect with English lyrics and lush r&v sensibilities. His captivating melodies were enriched by heartfelt songwriting, which narrates a romantic story of him trying to convince a love interest to stop playing games; “Quit playing my heart/ Don’t do it like that cause we can’t take it no more”.

He recently shared the accompanying video for the song, directed by Andy Madjitey who sets TWITCH 4EVA and his muse at the Aburi Botanical Gardens in the coastal city of Tema in Ghana. From the scenes of the couple eating at a dining table to them drowning in the ocean, the video uses symbolism to show how relationships can be a rollercoaster ride much like the timeline has shown us today.

Last year, dndSection debuted his EP, ‘Loves Lies Bleeding’ and the impressive 8-track tape showed off his ability to narrate introspective storytelling ok celebratory songs. This year, he followed up the tape with singles, “Darling” and “Zaza” which highlighted his versatility through the switch of pace from singing to rapping and it hinted at what’s to come from his promised project. The Atlanta-based artists continue to build anticipation for his coming project with a new single, “Know Me Well”, where he stunts on his haters with brags about his riches.

Hip-hop fans love to flex their muscles on wax, as is evident from the rap battle culture within the genre and dndSection doesn’t hold back his ride tongue, rapping, “Lately I’ve been giving niggas hell/ Your nigga broke and I can tell and I can see you hate yourself”. Though the atmospheric trap beat produced by AJ RMR and 88 Jay is relaxing and melodic, dnd leans into rap’s violent tendencies as he boasts about his gang ties—“I grew up with killers”—and continues expanding his range from the romantic themes of the two singles he released earlier this year.

Chicago-based Nigerian artist, Tobi Lou is gearing to release his new project, ‘Parrish Blue’. He has had a busy year, sharing singles like “Endorphins”, “Student Loans”, “Pretty Much”, “Skin Care Routine” and many more. However, he has just shared a new single, “OKAY” expected to feature on the forthcoming project and he teams up with another Chicago native, Dreezy for the romantic cut.

While Tobi Lou muses about a love interest who’s distant, saying “It’s been a little minute since you fucked with me/ Now you hit me up, what you want with me? I know your style/ I know you wild/ it’s been a while”, Dreezy is more affectionate as she describes her loving relationship with her lover. They both rap over the catchy rap beat produced by Matteo Woods and DILIP and they can both be seen in the lyrics video that accompanied the single’s release.

77Lamarr has shared a new single, “Lost Nights”, the debut single from his upcoming project, ‘My Excuse Is That I’m Young’. The single introduces him as a melodic trap artist as he crafts laidback melodies over the moody trap beat produced by the featured artist, Cjjohnny. “Lost Nights” depicts the unstable nature of young love through 77Lamarr’s narration of his experience with his muse; “First I love, then I curse/ Then we fuck and makeup again”.

Apart from the production of the lightweight beat, Cjjohnny also contributes a rap verse that describes using drugs to numb the pain from love going sour and toxic; “Living in the streets/ she lost it out here/ drowning in drugs/ cause the love ain’t out here”.

Ayüü debuted “Gawu” last December as the lead single from his 3rd project, ‘Ayüüniverse’. The dance-driven beat was produced by Trill Xoe and Tobay Music, who set the groovy backdrop for Ayuu’s sultry lyrics as they perform the song that can bring a raging dancefloor to a slow simmer for couples to dance to. Though the rest of the 15-track EP was released nearly a year ago, Ayuu has just revived the lead single with a music video, “Gawu: The Movie” which shows Ayuu playing the lover boy persona he describes in his songs.

The video for “Gawu: The Movie” was directed by ShotbyGhst and it opens with Ayüü and his love interest reminiscing about the start of their relationship before they get into a fight and she walks out on him. The music starts when he follows her and tries to charm her with his singing and dancing. His silky and mesmerising melodies prove effective on his muse as she joins in on the dancing to make for an exciting video that confirms the dancefloor appeal of Ayüü’s music.

Next Article The Angel You Don’t Know: What to expect from Amaarae’s debut album