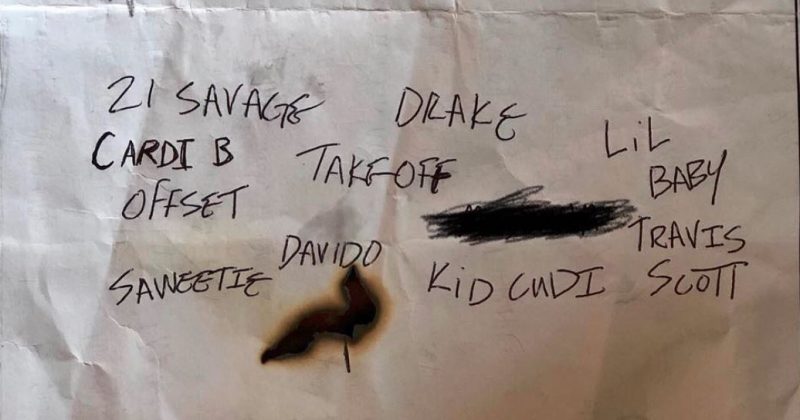 Late last year, the three Migos started to branch out to work on personal projects with other artists and producers. While Quavo released Huncho Jack, Jack Huncho with Travis, Offset dropped Without Warning, a collab tape with 21 savage that was solely produced by Metro Boomin. Although Quavo debuted three new singles and promised that his debut solo project, Quavo Huncho, would be released in September through a possible cover art on his Instagram, the Atlanta rapper is still yet to release the project.

However, fans got a glimpse of what to expect through a new post on Quavo’s Instagram today, hinting at a list of potential featured artists, written notably on a rough piece of paper. The piece of paper was an image with burnt holes containing unseen names that had been scribbled out, with the names of other Migos —Offset and Takeoff— as well as Travis, Lil Baby, Drake, Kid Cudi, 2 Savage, Cardi B, Davido and Saweetie. The Instagram post was captioned “P R E  S E A S O N  C U T S (Not Final Cut) Q U A V O H U N C H O”.

It’s unclear if this means more artists will be added or if some of the mentioned artists could be dropped from the final cut, however, a Davido and Quavo feature certainly happened.

The resulting track on Quavo’s final project will serve as more pertinent proof to confirm that the Afropop sound is more than just a phase or an aesthetic; it’s a globally recognized genre. Perhaps, the Quavo X Davido collaboration could even cause a repeat Billboard appearance after Wizkid’s “One Dance” feature scored a number one on the charts. Davido seems to think so.

Who ready for that @QuavoStuntin 🔥🔥🔥ALBUM!! TELL BILLBOARD AM COMING!! 🤧🤧🔥🔥🔊🇳🇬🌍🌍🛩🛩 pic.twitter.com/YQAzCDWIeD

ICYMI: Here are the 5 take-aways from Davido’s interview at the Breakfast Club talk show

Next Article B4bonah celebrates his rise to fame on new single, “Indomie”