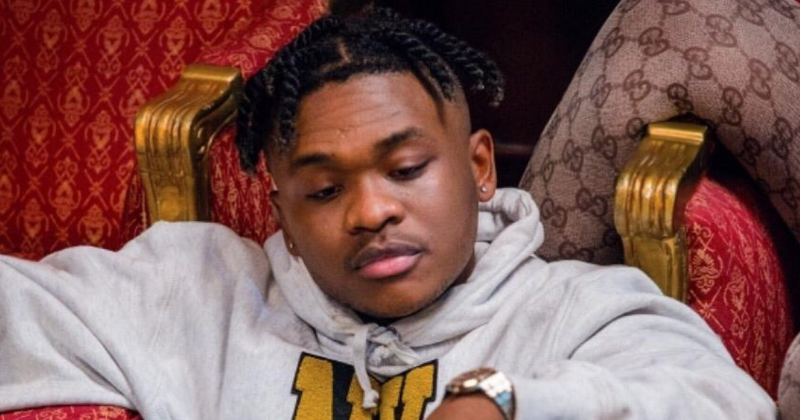 In the video his latest release, “Pim Pim”, Dice Ailes delivers a monologue to his “eight girlfriends”, self assuredly telling them off for taking his focus away from working hard trying to drop his debut album. Since he broke out with the inimitable “Otedola” in 2017, Dice Ailes has remained a key player in the afropop world, cementing his position as a hitmaker with songs like “Alakori”, to his recently released banger with the Olamide-assisted “Pim Pim”. With a versatile approach to the music, Dice has managed to keep eyes on him with every new release and now he’s ready to drop his album this year.

If they ask us to stay at home; where does the homeless go? 🤷‍♂️ #Covid19

Having grown up all over the world with multinational parents, Dice Ailes’ influences stem from a wide range of things, and this is what makes him special. Afropop’s global appeal is undeniable at this stage, and Dice Ailes saw the potential since as far back as 2013 when he moved back to Nigeria from Canada to promote his first single, “Yemisi”.

He’s come a long way from then, and from being signed to Chocolate City to scoring international hits, we’re sure he has way more in store for us. In these quiet and reflective times, we recently caught up with the Chocolate City rapper, to discuss his interesting journey so far, where he draws his influences from, and how he feels about the current state of Nigeria’s rap scene, and here’s what he had to say:

NATIVE: How did you discover that you had a passion for music? Have you always known?

Dice Ailes: I grew up in a bi-religious home; my mum is Christian and my dad is Muslim. So I used to  go to church on Sundays, and the Mosque on Fridays. My dad is Nigerian and my mom is Ghanaian, and they also had business all over the world, so I used to travel all the time, and experienced many different norms and cultures. My mum was also in the church choir, and some of my uncles were songwriters and aspiring artists, so I used to sit with them and watch them compose music and play different instruments like the drums, harmonica different things. That’s where I found my passion for music.

What events led to you making your passion into a career when you signed to Chocolate City?

In 2013, I travelled to Nigeria from Canada to promote a single called ”Yemisi”. It was one of my first trips down here that was related to music. I had just decided to get involved with Afropop cause I saw that it was on the rise at the time, and also wanted to contribute to the growing culture. I was trying to familiarise with the industry so we came here and during the trip, I met through a mutual friend. He listened to some of my music and 8 months down the line, we were signing contracts and just getting to business.

You must have witnessed Chocolate City’s steady incline growing up, how did it feel to be a rapper signed to the label?

Dice Ailes: M.I, Ice Prince and Jesse Jagz were like the top dogs when it came to rap and the Nigerian hip-hop, so it was a great feeling to have made the cut. To just to be one of the guys that would be mentioned with their names, that was very flattering.

When you first got into the game, it seemed like you kept to yourself quite a lot. Now, you’ve developed quite a strong friendship with Olamide. How did that happen? What does it feel like to have his support?

Dice Ailes: I’m generally the type of artist that doesn’t rush to do features just for the sake of it. I like to make sure that it sounds and feels right to me. Olamide has always been a big bro since the beginning of my career in Nigeria, he was always supportive, he’d reach out to me and post my music and comment on my pictures and all that stuff. We always wanted to work together from the beginning, but it just never happened. Then in 2019, the time felt right; we got into the studio for the first time and made about 4 songs. Ever since then, the brotherhood was just grown stronger.

You’ve proven to be a versatile artist and you dabble in quite a few different genres. What determines the direction you go with your music releases?

Dice Ailes: So because I’m able to make anything that comes to mind or anything that feels right, sometimes it’s a bit hard to decide the direction to go with the music that I put out. A lot of times, I’m sitting on like 10-15 songs when I’m about to release 1 single. At the end of the day I just go with whatever feels right to me, I listen to my gut. Could be that I just want to reach out to my female fans/audience, so I put out a love song like “Pim Pim”. Could be that I just want to speak to my guys and making them feel inspired about the hustle and then I’d release a song like “Otedola”. That’s just how it goes for me.

“Otedola” was such a massive song. Did you know that it was a hit when you recorded it?

I knew it was a huge song as soon as I recorded it. For every song I record, the dream generally is to have it become a smash. But I was definitely sure that “Otedola” was going to do what it did. I even thought it would do more to be honest. When I shot the video as well, I was excited about it, everything just felt right. A lot of people didn’t believe in it and didn’t want me to put it out because it sounded a bit too different from what was out on the market at the time, but I just knew that it had something.

Not really, I know that I have it in me. I never really try to imitate my previous releases because there’s a lot that the future has in store for me, so I just explore the stuff in me. I don’t try to imitate the past.

A lot of people look back and cringe at their first hits. How does “Otedola” make you feel in 2020?

I think it’s one of my favorite songs that I ever put out. It just describes me and I think it’s amazing composition. I think it’s brilliant what I did with the lyrics, using a lot of metaphors and similes. As soon as I recorded it, I knew that it had something. I knew it was going to become a huge record.

The Weeknd posted a video listening to it. Naomi Campbell, Tinie Tempah, Not3s, Dave, Skepta all reached out to me. A lot of people around the world reached out to me to say they liked it. “Miracle” was a hit song that I didn’t necessarily love because it sounded like something that was already in the market and I generally like to sound different. But then I’m thankful for it cause that was my first national hit record and that’s sort of what brought the attention I needed when I came back to Nigeria.

How do you think social media has impacted your career, and the way people engage with your music?

I think social media has helped to connect people more easily and it has helped to spread music faster than it used to back in the day, which is good. On the other hand, I think it has also given fans too much access to their favourite artists and icons, to the point where the idea of celebrity is starting to diminish. It almost feels like we’re all in one room just being friends. I think that of course it helps engagement but gone are the days where artists like Michael and Madonna were like gods. Now it’s like artists and their fans are like best friends and while I’ve benefited from it helping me spread my music, I’m not a fan of the downsides of it.

We’ve had quite a few hit singles from you over the years, and fans are now anticipating a full project. Is there a reason you didn’t drop one all this time?

There’s no deep reason, I just like to take my time and make sure everything feels right. I like to give my fans quality music and quality visuals. It all has to make sense to me. 2020 is the year that I put out the debut album. We’ve been recording a lot of amazing songs and I’m happy and just ready to go right now.

Well, we’re definitely ready too and will be keeping an eye out for it. Already, we have a good sense of what it’s going to be like, with songs like “Pim Pim”, which from the subtitles in the video we can tell is aimed for an international audience. His feature on Spanish singer, Kaydy Cain’s “Hasta El Piso” was indication that there are eyes on him from all over the globe, and it would be interesting to see who else is watching when he drops.

0000
Previous Article Essentials: Gbasky’s ‘Black Frequency (EP)’ is folk-pop you can relate to