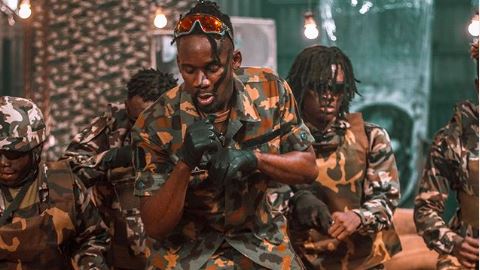 Mr Eazi has released a new single, “Kpalanga”, after celebrating the 3rd year anniversary of his romantic relationship with Temi Otedola. He puts his mushy side on full display on the Killertunez-produced single, which allows him to take a break from his globe-trotting schemes and focus on emotional sentiments.

Imagine Getting married & shortly after you gotta leave your lover & go serve your country this was the plight of my Dad & loads of Men & Women gallantly serving our Country! Soulja sef dey Love o!!! God bless Our service men & Women 🙏🏿 more Life! #Kpalanga

Killertunez produced the catchy beat for “Kpalanga” and sets a lightweight groove for Mr Eazi’s heartfelt confessions of love; “If you want, I go cry a river/ Just to show you your love dey make me kpalanga”. He explained in a GQ interview that the song is inspired by the love between his military father and civilian mother and dedicated the song to men and women in service. The military appreciation is also expected to reflect in the music video when it premiers later today.

In the meantime, you can listen to “Kpalanga” below.

ICYMI: Listen to “Tony Montana” by Mr Eazi and Tyga