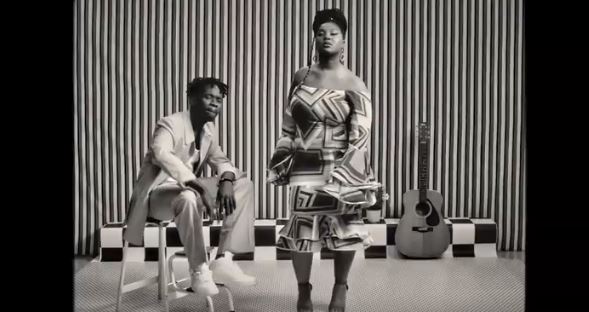 DYO channels nostalgia for black and white frames in music video for “Go All The Way”, featuring Mr Eazi

DYO is embracing the spotlight. Formerly going by the pseudonym Ms D, the Ivor Novello-nominated singer-songwriter has accumulated multiple guest appearances and writing credits on other artists’ works, since early this decade. This year, though, she’s focused on her solo releases. She’s already released her vibrant “Arena” single and a remix with Adekunle Gold, as well as separate music videos for both. Consolidating her solo run, she just shared the music video for “Go All The Way”, a new single with Afropop heavyweight, Mr Eazi.

Flaunting her trademark, expressive pen game, DYO’s lyrics are explicitly enticing, with a sensual edge. In addition to joining DYO on the song’s chorus, Mr Eazi also drops a flirty verse over the vivacious, his languid melodies contrasting and complimenting DYO’s siren-like vocals. Tapping into the song’s sultriness, the music video Mahaneela directs for “Go All The Way”, is a crisp collage of shots showing both singers performing their lyrics, as well as beautiful black faces, at a photoshoot setting. Inspired by “great African photographers”, the video also incorporates filters and props that distinctly mirror the ’70s.

Watch the video for DYO’s “Go All The Way” here.

0200
Previous Article Premiere: Daramola on It’s ‘A Double Pleasure to Deceive a Deceiver’