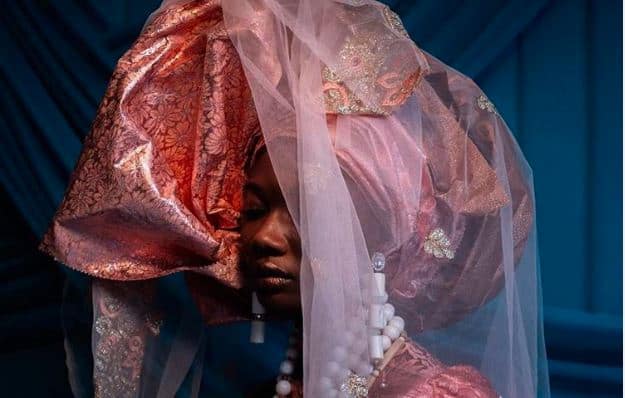 Lakin Ogunbanwo debuted his latest photography collection, “E Wá Wo Mi (Come Look at Me)” with Niki Cryan Gallery last month. Women wearing veils are the subject of the new photographs, seemingly contrasting his previous “Are We Good Enough” which captured men wearing different hats. While both portrait collections carry Lakin’s signature bold and vivid tones, “E Wá Wo Mi” explores the Nigerian wedding ceremony culture through the bridal direction of the costumes.

He’s able to create a striking impression with the silky fabrics while also balancing bright colours with dark shadow in the portrait pictures of his brides. To achieve the punchy images, he tells me he was very hands-on and involved with every aspect of what went into each frame. “From the models to the clothes, to the lighting to the makeup, I pick very specifically to what I think fits the narrative I’m trying to put out.” 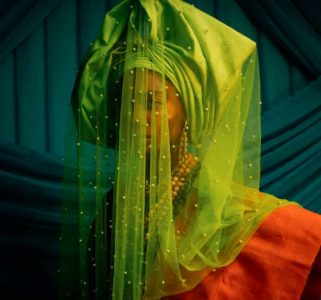 Having started out commercially as a fashion photographer, it’s no surprise that he’s so adept at picking appropriate costumes to express his art. However, it wasn’t till 2012 when he began shooting the “Are We Good Enough” hat collection that his artistic vision and the ideology he wants to put out crystallized. “I realized I wanted to capture my culture and document it as best as I can but also put a contemporary world view on it.”

Lakin Ogunbanwo has gotten international recognition for his works, using photography to expand the contemporary African visual art archive. He has featured on magazines like Times, New Yorker, British GQ and making it on “British Journal of Photography”‘s Top 25 Photographers of 2015 in their annual ‘Ones to Watch’ list. But Lakin tells me Nigeria is his favourite place to display his work because he doesn’t have to answer overly philosophical questions about the cultural significance of every little detail in his work. “Everyone just gets that the concept is a bridal ceremony.”

Though the media attention has certainly helped the trajectory of his career, Lakin explains that it’s the days where he shares his art with people who appreciate it that means the most to him. “To be able to show the work that is very inspired by my culture to people who are part of that culture and understand it and its layers and nuisances.” He describes his audience at the Niki Cryan Gallery with a fondness that suggests he knows most people present by name. With everyone around expressing pleasant thoughts about his work, he tells me it’s very humbling to be described as an inspiration but ultimately, it doesn’t affect what he creates. “I choose not to define my work based on who is affected by it or who are inspired by it. I don’t do it cause I want an audience to like it. I do it cause I want to put it out.”

As a result of his unapologetic self-expression, he has become a sort of ambassador for Africa, using his works to challenge the monolithic narratives of Africa. His “Are We Good Enough” series, for instance, used traditional Nigerian hats to explore the individuality within the Nigerian culture. “I don’t like when people speak of Africa as just this one body of people. There are many ways to be African.” Now he’s looking to expand his artistic expression to film-making as he’s expected to release a short film later this year. Though he prefered to remain mysterious about the themes the film would explore, snippets from the viewing of his “E Wá Wo Mi (Come Look at Me)” hints at an expansion on the wedding ceremony photographs.

ICYMI: Into the mind of Surreal 16 filmmaker, Abba Makama