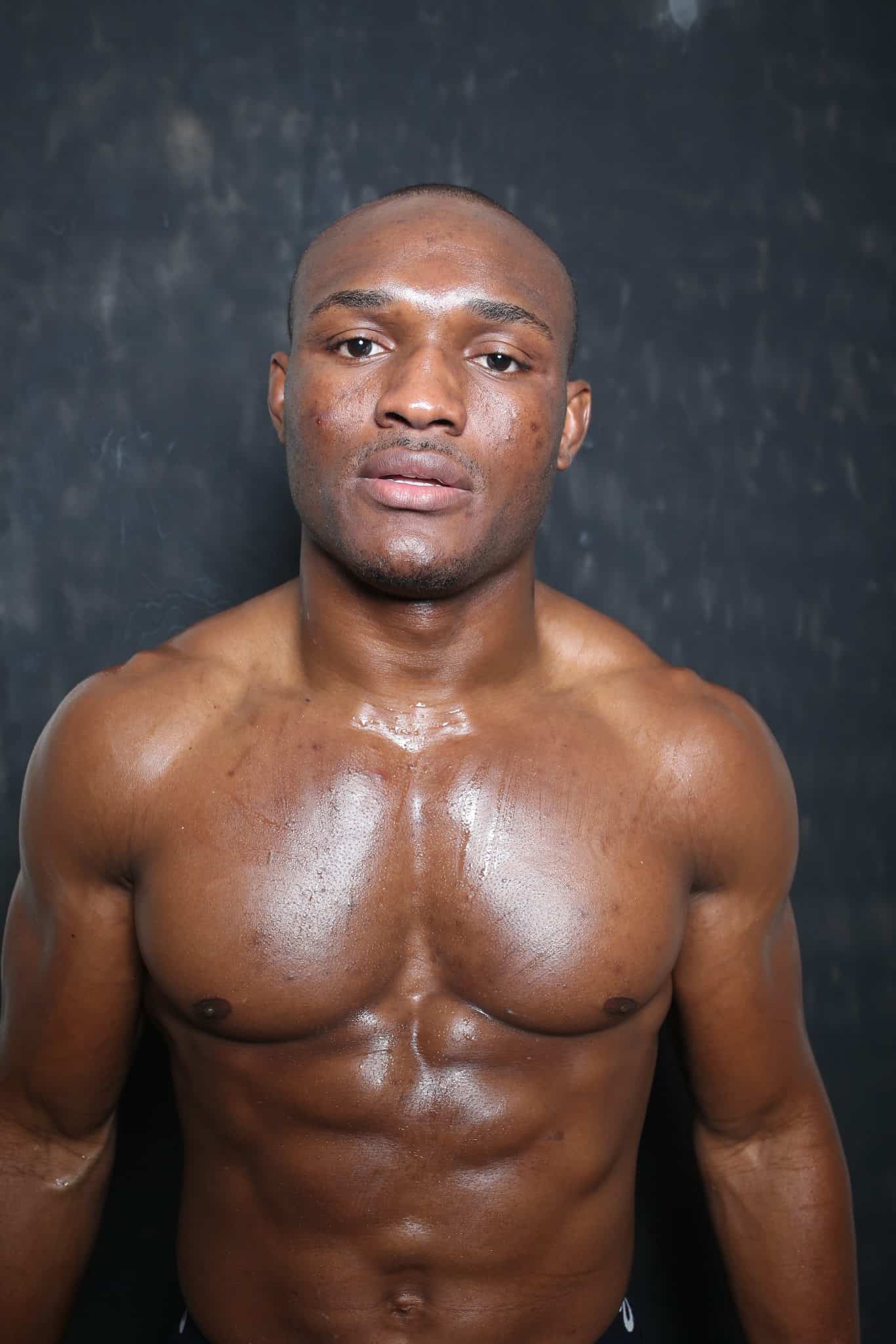 Somewhere between Benin and Texas, Kamaru is fighting to put Nigeria on the map

The Ultimate Fighting Championship has grown tremendously over years, with the recent $4.5bn sale to WMG now solidifying its status as a global sporting empire. Now televised in over 150 countries with 45% of their viewership stemming from the millennials.

The new breed of fighters flocking into the UFC have as much to do with this boom, as the legends from Bas Rutten to the Nogueira brothers or Randy Couture. For a lot of the newer viewers, there’s the instant attraction of loud-mouthed Irish showman, Conor McGregor. Through a combination of WWE style promos at press conferences, backed by knockouts and title wins at two weight divisions, it’s likely we’re at the crest of the UFC’s current wave.

This being said, not all of the fighters within the company are known to have talked their way into notoriety, with some, a dying breed, perhaps having let their game, speak for them. Cue in one of the most promising current rising fighters, Kamaru Usman.

Emerging through a tough welterweight division, Kamaru’s journey into the UFC has been quite colourful and his story, starts out of Nigeria.

Some eight years after birth, in Benin City, a young Kamaru Usman relocated to Texas in the middle of a rare snowy season. Owing to his father’s involvement in the US military, the remainder of his childhood was spent in Arlington. It was here, he recalled for me his early attempts at wrestling. “In the group we had a girl, and she was little like me and we started wrestling and training. I knew nothing, and this girl just embarrasses me, she beats me up bad! And at this point I didn’t know who she was, I didn’t know she was already a two-time division state champion.”

A month into training and much of the same results, he described the mentality behind going back and eventually scoring wins over his opponents. Learning of his resilience – a trait at the core of his very persona today, a fighter was born. Deciding to stick with the discipline at the end of junior year, Usman would go on to train meticulously into his senior year (ranked #4 in the state).  A scholarship from William Penn University and a transfer to the University of Nebraska, Usman had now found home with competitive wrestlers, sharing the the same goals.

In the process of conversation, we’re often halted by sounds of Usman’s young daughter playing in the background, securing pauses to give her demanded attention – in any event, Usman doesn’t lose a beat from wherever he stops. Unaware of the proceeding  irony, he continues “I was always taught when adults or grown folk are talking, be quiet. When someone’s talking to you, you listen before you speak”.

This reflective impulse to consider the gravity of words and advice seems to have held Kamaru well in his formative years and now appears tenfold, in his actions, “my dad always told me, only a foolish person is gonna run their mouth when they know they’re not capable of doing what they talk about.”

At UofN, Usman ranked #1 going into the national tournament but an injury-hit campaign saw him compete to finish third at the tournament, returning as a favourite the following year. Close but not quite, yet again, as Usman reached the final and lost out to the two-time defending champ, a man he’d beaten three times during the season. The tale does correct itself the year after, as he would go on to win the championship.

And it was in a brief sombre moment following the win, flanked by his girlfriend in the hotel lobby, Usman recalls, the question he posed to himself. “What next?”. “I chased that for so long, I wanted to feel this feeling and now I have it….what next?”

Through a stint of Greco-Roman training, Usman’s dreams of making the Olympic team were dashed on account of more persistent injuries, and on the brink of walking away from the sport, opportunity arose as pro-MMA fighters began contacting Kamaru, for his training expertise. “I would go to a tournament in Russia and wrestle, if I won or place, I’d get 1500 dollars and these guys I train with, hold down or do whatever I want with, go into a fight knock a guy out and earn a hundred thousand. I’m thinking I’m in the wrong sport!”

Finally the question, had an answer. Six pro-MMA fights (with five knockouts) Usman landed himself in popular MMA TV series, “The Ultimate Fighter 21”, pitting his fighting gym, ‘The Blackzilians’ against rival stable, ‘American Top Team’ in 2015. Accelerating his rise tenfold  – dominated competition over the series, landing a spot in the final of the TUF21, winning by submission in two rounds.

“For the title, I’ll fight anybody…I’ll fight my brother!”

“The question now arises, once more” he explains “what next?” Currently on an impressive win streak in the UFC,  after besting Warlley Alves in Brazil, he infamously called out Demian Maia. “A lot of people get in there and just call people out, I’ve gotten four and dominated all four, don’t think I’ve lost a round”. A slight rise in tone and out comes the fighting talk, “Maia says he’s the best grappler, he’s proved that but he’s also fought a lot of guys that can’t really wrestle the way I wrestle”. 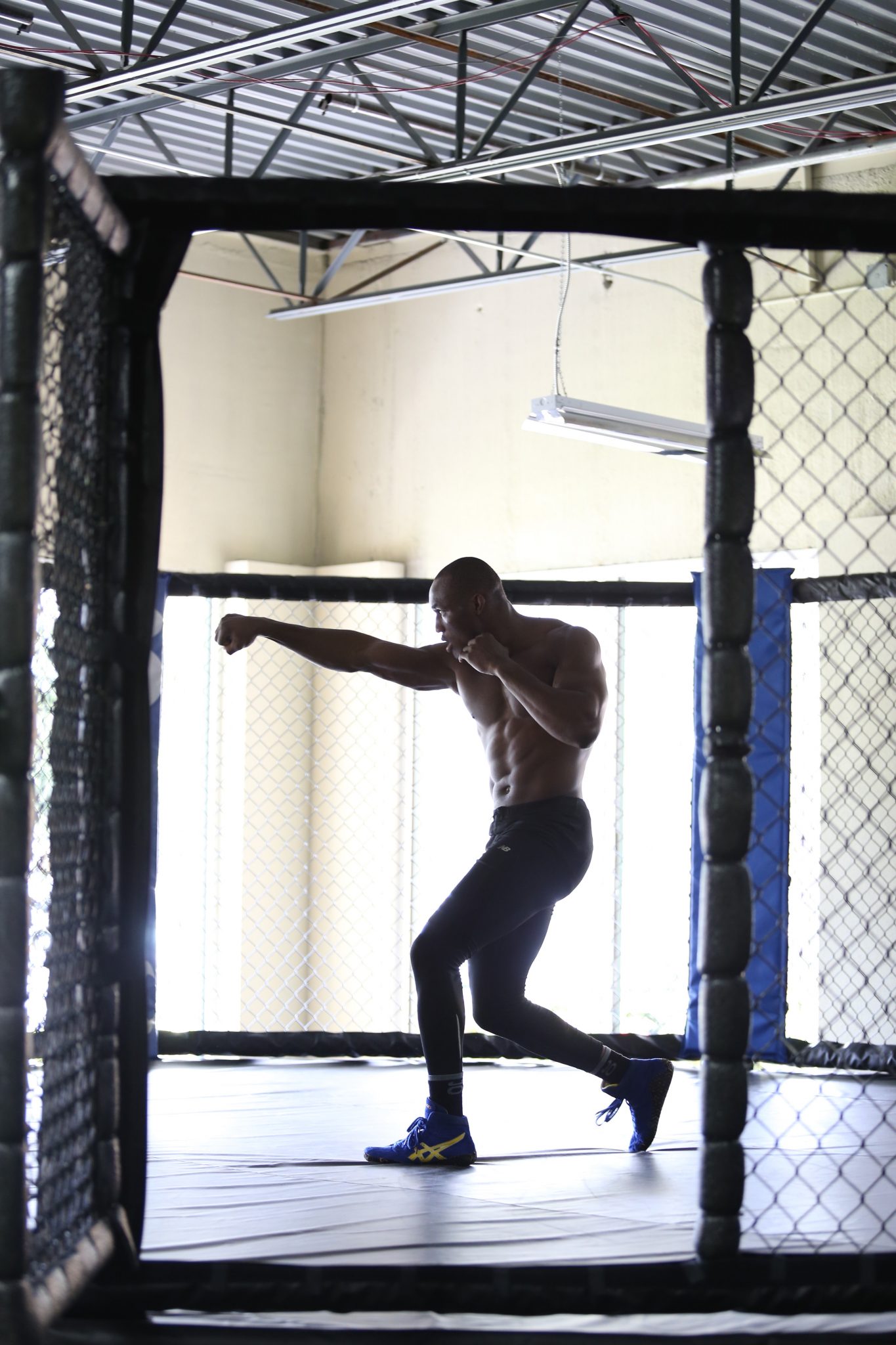 As we’ve all come to find out time and time again, where boastful breakdowns of an opponent are concerned, the theory is quite often very far from the reality that emerges. Certainly in comparison to the pugilistic variation of combat, this has in part helped facilitate the UFC’s remarkable explosion over the last decade. As a true stand and deliver sport, the best will always meet the best, and after that, they’ll probably always meet better. All being said, there’s a noticeabe aura, an added assuredness to Usman’s words here – he continues, “I’ve seen DMs fights, I’ve studied him. When he can’t get the takedown that’s it.”

And in the event of failing to land this fight? Former marine, Jake Ellenberger, a name I’ve recently heard floated, unaware of the pair’s affinity for each other stemming from their roots in Nebraska. Usman explains “I would rather not fight since we are close but if it was for the title, I’ll fight anybody…I’ll fight my brother!” I ask who else he’s interested in taking on, after running through a number of the top tier options, he aptly summarises with “I’m a bad matchup for ANYBODY!”

Switching away from fighting, I’m eager to learn about his life outside of MMA, outside the the chaos of training for huge MMA fights, Usman is the process of completing a Sociology degree. Describing himself as “family oriented” Usman lays forward his relationship with family member from siblings to parents and daughter – “I don’t watch a lot of TV but I have a number of shows that I watch,  between that and (on cue, his daughter coos away in the background)…my daughter keeps me busy!”

The chime of musical toys, segue into our next topic, one that has steadily become a huge part of the fight game. With increasing numbers of artists tagging along to big-money shows, walking fighters into their ring, serenaded by their biggest hits. Either to ease nerves or pump adrenaline, these anthems all play their part but with Usman, he’s become known to dance to some distinct tracks on the road to the Octagon. “My music taste is so diverse, it’s crazy. A lot of people won’t believe I’m an old soul. My personal favourite is old school jazz and elevator music, bit of an old soul, I listen to everything, hip hop rap old school new school. I think a lot of the new school is trash but occasionally I’ll listen to Young Thug, Chris brown, all those guys”

The ‘trash’ comment being one I’m particularly eager to expound on, time constraints and a waiting daughter wisely signal now probably isn’t the time to go down that rabbit-hole of discussion, I let it gently slide. Instead digging into his interest in music of the motherland and Usman doesn’t miss a beat. I’m mostly into Nigerian songs now, more so because older brother is into it now, there’s a lot of talent coming out of there so most of my fights I come out to Afrobeats”

Mentioning the usual suspects, Wizkid, Phyno, Davido, P-Square as well as MC Galaxy, who he’s been seen vibing to =, over on the ‘gram, Usman also credits his access to new music to his older brother who keeps him abreast. Further evident that family is important to the champ elect, we also touch on his much-awaited trip to Nigeria, to visit extended family, “all in due time”.

“A lot of talent coming out of there, so most of my fights I come out to Afrobeats”

Inadvertently, I’m keen to find out what he believes the prospects of MMA in Nigeria may be with a number of notable MMA fighters of Nigerian heritage are competing across the globe. King Mo Lawal (a former Strikeforce Light Heavyweight champ he’s grown up with in Texas), Anthony Njoudokani and Jimi Manuwa, a brit of Nigerian descent fighting in the Light Heavyweight division,  all names rising up the rank but what’s Usman’s take on the current state of play? “I think it could grow, it just needs the right people to bring attention to it (in Nigeria),of course, there is a lot more to the athlete which we perhaps do not get to see:

“Well hopefully I have a little business set up where I can pay the bills cos this fight game is not forever, people see this on TV fifteen or twenty minutes but nah, it takes months and months of preparation.  There it is! Right, before I leave, the last signifier of Usman’s Nigerian upbringing surfaces without any real provocation, the holy grail of long term financial stability.

What’s next for Kamaru Usman? The title bid! If you’re not already aware, remember the name. 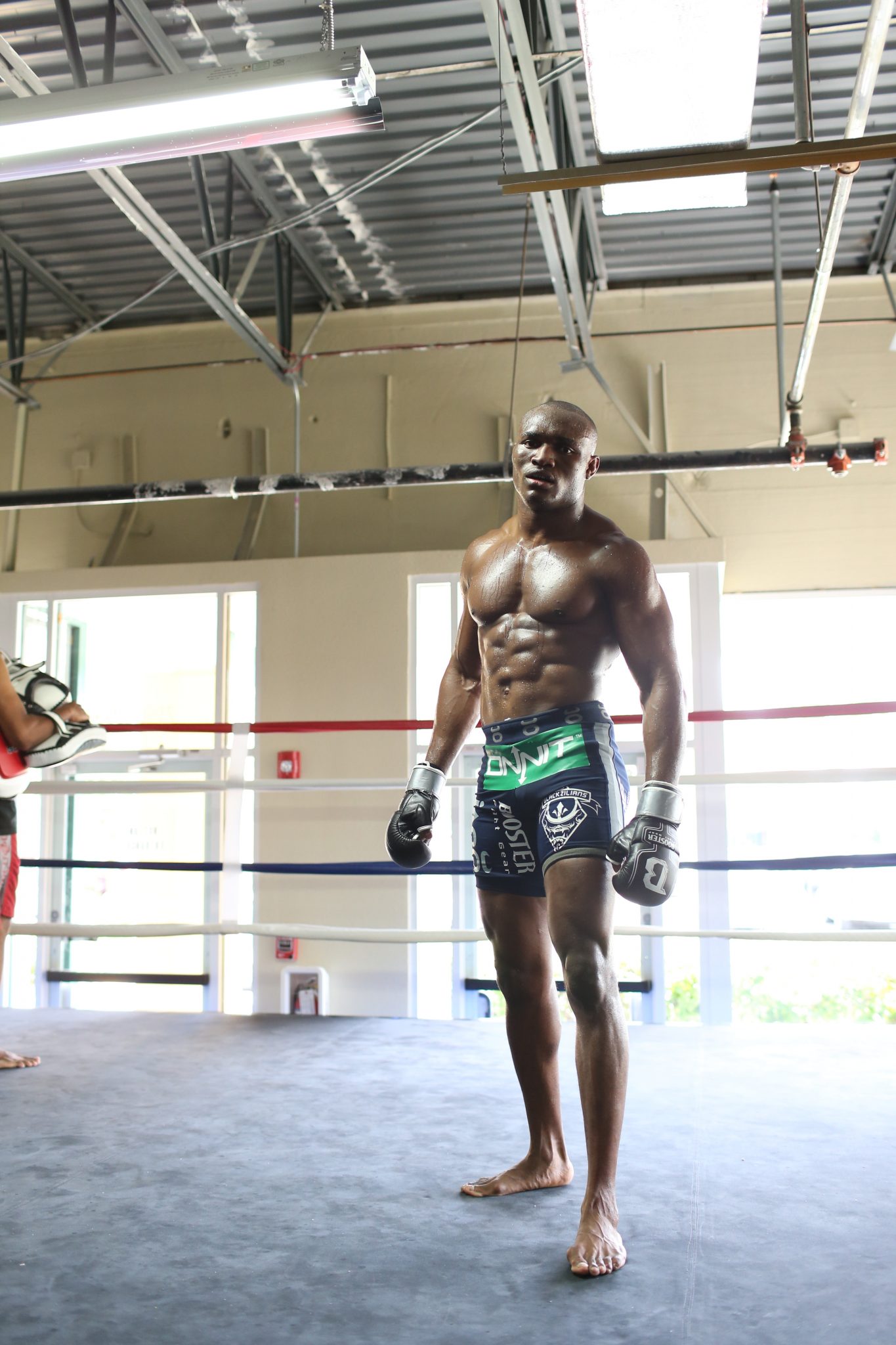