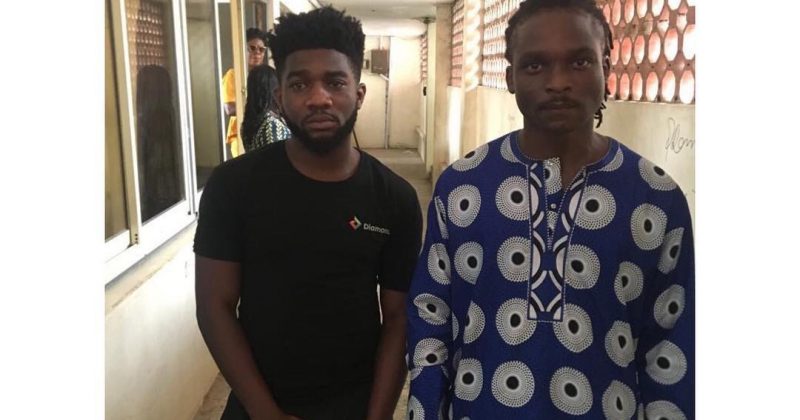 Now and again sexual impropriety and assault come up in popular conversation and between blatantly disbelieving victims and a healthy dose of slut-shaming, certain things seem to always be demanded from them; A report to the police instead of social media call outs and Evidence of the assault being the most popular. Chima and Ricco’s victim checked both boxes yet hours after they both were arrested for drug-facilitated sexual assault, they were not just released but swapped for the complainants.

On a night out with their victim, Chima George and Segun Rasak aka Dj Ricco reportedly drugged and raped her in a hotel owned by Chima’s dad. Alerting her brother to the assault, the police was brought in, both rapists were arrested and video evidence of the assault was discovered.

In an unusual turn of events, another report surfaced online at about lunchtime, yesterday,  a now-deleted tweet suggested Chima and Ricco were allegedly released to their families and the victim’s brother arrested in their stead. The officers on the case are also said to have deleted actionable evidence from the record. Unperturbed by the undeniable blow to the simmering hope of seeing justice be served, the underhandedness of their release has sent people into a frenzy.

Minutes after news that the alleged rapists Chima and Ricco had been let off the hook broke, the hashtag – #JusticeforRapeinNigeria garnered enough engagements to become a trending topic, pro bono legal teams banded together to take on the victims case, some people have taken time out to update reviews of the Dellankaster Hotel where the assault took place on booking platforms; driving its ratings into the ground.

Confronted with a seemingly dead end with law enforcement in our country despite the constant chatter on sexual assault taking place around the world with movements like #metoo and #marketmarch,  it’s tempting to resign to silence but the multiplier effect the activism has catalyzed must never be downplayed. We’re inching closer to completely breaking the culture of silence with these crucial conversations empowering people to confront harassment and assault in ways that previously may have felt too risky.

However well-intentioned, dedicating resources, time and energy to telling women how not to get raped to avoid being at the mercy of a justice system they lack confidence in is bollocks. This only provides women with a false sense of comfort and the illusion that taking certain precautions can solve the problem of rape, which it won’t.

It’s an uncomfortable conversation to have but properly addressing sexual violence requires confronting deeper problems — like unhealthy gender stereotypes and a peer culture that perpetuate or tolerate abuse. Everyone has a role to play in keeping people safe and this responsibility involves maintaining a healthy attitude towards pursuing justice.

It may not be happening at an ideal pace, but the wholesome picture of justice for sexual assault survivors is gradually taking shape and we’ll be here, fighting till the end.

Update at 8:00 P.M, February 7th: According to an alternate statement from DSVRT, Lagos state’s Domestic and Sexual Violence Response Team, Ricco and Chima are still in police custody awaiting their court dates. The agency revealed both boys were still being remanded by Magistrate Court 3, Ikeja on 6th February 2019 for a trial adjourned till 7th of March 2019.

We have seen your post and we believe you will do the right thing by giving people adequate proof of the accused persons in custody. We need to let Nigerians know that some organisations can be trusted to do their jobs transparently. https://t.co/8fXE55eYBV

The status of the release of Ricco and Don Chima, however, remains uncertain until a legal procedure has been followed all the way through. This is a developing story.