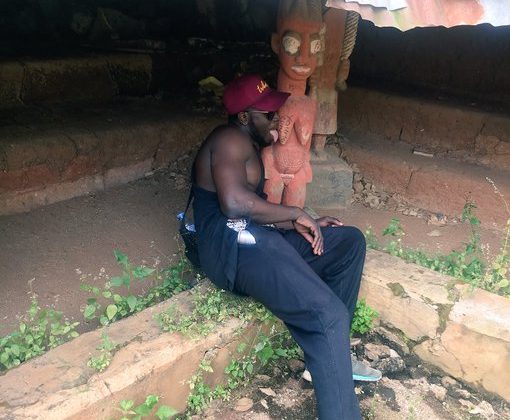 PSA: Our histories and cultures are not a gag for you to get some internet attention

A random twitter user tweeted this in response to a tweet by actor and comedian Bollylomo. This has been happening with some frequency since October 1st, when the comedian, as part of a trip of Nigerian influencers exploring Akure for travel start up Tripzapp, photographed himself simulating foreplay with a shigidi (an effigy of a Yoruba deity). The comedian was swiftly and overwhelmingly chastised for his impropriety, many pointing out that as a public figure, Bollylomo should have known better than to ridicule yoruba religious imagery for a laugh and some retweets. Bollylomo largely ignored the overwhelming reaction that followed his original tweet before eventually capitulating and quietly deleting his tweet. But the damage was already done and as the tweet above suggests, the internet never forgets.

Unlike most other cultures in Nigeria, badly affected by years of colonialism and then forced Westernization, Yoruba culture and Orisa worship have remained largely unharmed, with the rituals and festivals around these cultures still as relevant in the lives of indigenous Yoruba people today as they were 500 years ago. Orisa worship is a living culture that has evolved  to encompass Western Orthodox religions that tried to use violence and indoctrination to suppress the worship of the deities; new iterations like Santeria, Voodoun and Lucumi. There are millions of adherents to actively practice Orisa worship but have to hide their beliefs because they are considered backward and savage. This idea that African culture is somehow ‘dead’ and available to be disrespected, exploited or destroyed is sad.

While Bollylomo’s actions were particularly distasteful, he isn’t the first or the only Nigerian celebrity who has taken the culture of people he/she doesn’t understand and misappropriated it for personal gain or some attention. The Nigerian entertainment industry has a recurring problem with this. Take for example, Nigerian cinema, especially the ‘epic’ sub genre. There are dozens, nay, hundreds of films by Nigerian directors and producers set in pre-colonial Nigeria, where the costuming of the characters pay no attention to the task of accurately representing the clothes of the people from the time being portrayed. They choose instead to rehash colonial ideas of what ‘ancient’ Africa looks like, drawing inspiration and mutilating traditional ceremonial dress from the Zulu and Xhosa tribes of South Africa (think beaded armour and hide shields) and the Maasai of Kenya. Our music videos are rife with ‘African’ warriors who are dressed and represented in ways that could have been culled right out of a colonial text book.

Why does it matter that Nigerians are finally taking notice of the ignorance, disrespect and absentminded misappropriation that often characterizes celebrity interactions with Nigerian culture?

Well, it means we are finally realising that the idea that our traditional cultures are ‘barbaric’ or ‘outdated’ is misguided and ignorant residue of centuries of Western influence. It also suggests that even though we might not longer personally believe in these cultures, we are finally understanding that they should still be respected and if they are going to be used in contemporary pop culture, the people who want to use them are obligated to make sure that their representations are respectful and accurate. The blurring of the unique traits of individual cultures into  one amorphous ‘African’ stereotype will no longer fly.