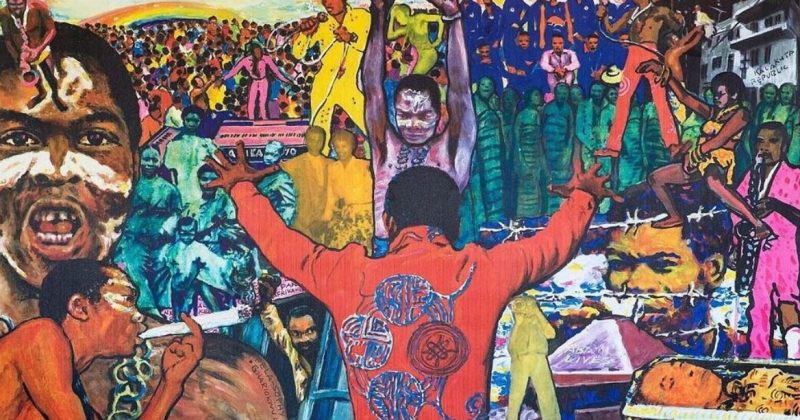 Until a few weeks ago I had somehow never heard of Art X. A friend sent me a link to get the tickets and it only took a few moments to realise I had missed West Africa’s first international art fair of innovative contemporary art from Africa and the diaspora last year. Fortunately for me, founder and director, Tokini Peterside is still passionate about widening Nigeria’s connection to the contemporary art scene across Africa and the world. And after attending the rehearsals for the live music performance as a member of the press, I couldn’t be any more psyched to attend this year’s installment of the Art X showcase.

This year, #ARTXLagos will feature work from over 60 artists through exhibitions, performances and as part of our curated and special projects. ART X Lagos takes place at The Civic Centre in Victoria Island from 3rd-5th November. Register today at www.artxlagos.com/tickets.

We were cramped in a dimly lit room surrounded by riveting art pieces: a black and white hyperrealistic painting of David Bowie, a bizarre cast of characters, hieroglyphic scribbles, hung sculptures and colorful theatrical sets. At the centre of all that madness were backup singers, manned keyboards, drums, 808s, and some of the more experimental musicians Nigeria has to offer; Wavy The Creator, LadiPoe and Tomi Thomas.

I got to the studio just in time to watch Wavy round up her set with a little jig that wasn’t as much of a dance as it was a synergy of her oneness with the energy in the room. Next came Poe who took center stage to spit some fire bars and Tomi Thomas followed on the same high-spirited note singing about sex and drugs. Producer, Ayo and some sound engineers present offered a few suggestions to work out some bugs they noticed with the sound arrangements before the DJ sets were given a go, backed by live vocals and instruments. Taken together, the sounds, the lyrics and art are an intense alternate universe of grimy magic, reflecting the mixture of irony and sincerity in Nigeria’s contemporary art scene.

Though musicians have always been considered artists and have occasionally tried to hijack the art world—most notably Jay Z’s video for “Picasso Baby”—both essentially represent the same culture and the tell stories of the same people. Some have criticized artistic themed videos and concept songs as being neither comfortably one thing or the other but Art X is blurring all lines distinguishing artistic expressions by putting the aesthetics of music into an art gallery setting. They are offering their audience the life and energy one would expect from such a sentimental attachment to youth culture. And the suburban mayhem of Wavy, Tomi Thomas and Poe’s live performance promises contemporary exotica for tourist appeal.

While it’s true that most people are coming to see some of the most rad art from Africa displayed in Nigeria, you can’t rule out that some just want to show up for the party. The inclusion of the live music sets ensures everyone experiences the art not as a mere observer but as a part of it. And since we can’t blame anyone for doubting the potency of Nigerian music as art, we’ve asked Poe, Wavy and Tomi Thomas to weigh in on the matter.

Poe: “There’s nothing wrong with being a recording artist. But I believe for you to really be able to call yourself an artist, you can’t be afraid to get on stage and perform your songs without autotune; that’s the way the music is meant to to be heard. And the overall vision of Art X bringing artists from all over Africa is amazing. It’s important for our stories to be heard. Everyone is coming to experience something new and it’s the best place to say ‘This Is Who I Am And This Is What I Stand For’. A lot of musicians can draw and have an appreciation of aesthetic. Art is not black and white.”

Wavy The Creator: “I mostly don’t write, so for every song it’s just me expressing how I’m feeling in the moment. Performing live gives you an opportunity to show more of the creative art side. Because you can be as free as you want to and make new sounds (I’m thinking freestyle). Art and music complement each other cause you can picture what you hear and if you see a video relating to a song you appreciate the song more.”

Tomi Thomas: “I believe if you listen, just as you’ll have your own impression of a painting, music is subjective. For me it’s a real life theatrical display of words coming to manifestation. But for another person, they may see it as having to do with something personal with them. Art is creation, everyone is an artist. I just want to play my music and if people appreciate it enough to call me to play, I’m grateful.”

If you’ve always considered Nigerian music as 2D, incorporating other senses makes it 3D. Maybe this performance is a sound piece that lives in the Civic Centre venue for Art X on the 4th and 5th of November. You don’t want to miss it.

Next Article Nasty C and Tellaman team up for new single, “Dance”