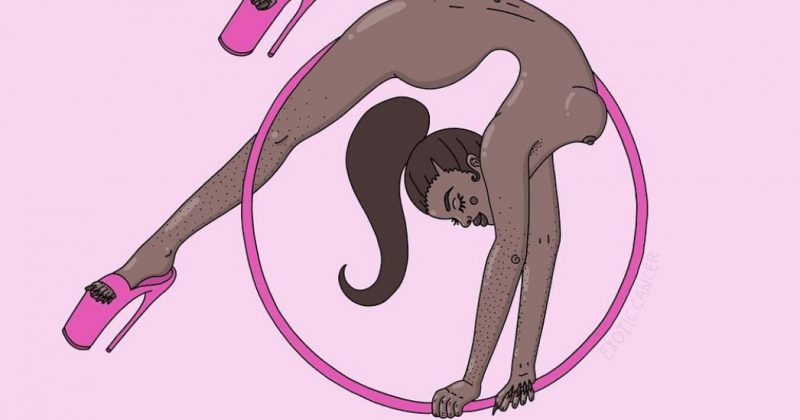 You know it’s a thing thing when Beyoncé refers to Only Fans in a song with Megan Thee Stallion, and that’s not to say that the ladies on Only Fans weren’t holding it down long before Queen B’s nod. Launched back in 2016, OnlyFans is the latest social network which allows creators to monetise their content through a monthly subscription. For as long as we’ve all existed, sex work has been relegated to the hot spots, however, in a world of digital convergence and sex-positivity, this platform and others like it are bringing it into the mainstream and we all for it.

Since the global crisis hit, according to Vice, the platform has reported more than a 75% increase in new sign-ups in April and has gained around 150,000 new users every 24 hours. This may be due to most likely, a combination of staying-home boredom and the eye-catching quality of a lax avenue to create income while businesses around the world suffer heavy losses from social distancing requirements.

There’s an immense power in the recent wave of celebrating the female body in all its glory, and it’s time to shake off the stigma that these women (and a few men) get for controlling their own narrative. To get a better idea of this, we spoke to a few women who have been active in the digital sphere of sex work about how they got started, why they do what they do and what it does for them.

It’s a common misconception that sex work is only one thing, however, it’s extremely multi-faceted with many varying mediums of how one can go about their business. From being physically present to virtually, such as with Only Fans or even just a raunchy Twitter account dedicated to selling nudes, there’s not only one way of entering this market.

Keen to get a real understanding of how African girls are tapping into the phenomenon, I spoke to Pinky, Alice and Maria*, three women at different stages of their careers.

For women like Pinky living in Ghana, her journey as a sex worker began like most: from selling private pictures to eager buyers on a private Snapchat account, and when demand increased, she quickly changed with the times and moved to Twitter, and now she’s found a permanent home on Only Fans, where she’s able to release as much or as little as she pleases. For now, she’s growing her following and establishing client relationships, because the market being too saturated means having to cater to a loyal following.

“I have always felt like I have been participating in some kind of non-consensual sex work with men I have met, dudes have always tried to give me value back for time spent on them. Especially the men from Ghana” Pinky explains to me. While popular culture would have us believe that sex is only acceptable in the context of monogamous relationships, Pinky wants to drop that, and also let other women know that it’s okay to drop these messages that have been hammered in our heads forever.

“As a bisexual woman and a non-believer in monogamy, it was not hard for me to separate sex from something that we’ve been taught only exists in the context of a relationship. Why does the money I am bringing in have to justify what I am doing as a source of work?

You’re basically projecting. Sex is this huge thing everyone knows about and talks about, but it’s made dirty when women want to make buck off it. It makes me feel really good about myself so I don’t plan to stop anytime soon, no matter who judges me”.

For others like Ms. Alice, she’s still testing the waters having kicked things off a few months ago, and isn’t planning to start an Only Fans anytime soon. She sort of stumbled into monetising her sexuality, and only started taking it seriously when a male friend requested some nude photos for a fee. She then realised the untapped market right before her and has since made it a little side gig. ‘I don’t think I’ll ever actually start an Only Fans. For me, I’m not really where I’d like to be in terms of body confidence so not yet’ she says to me with a laugh. ‘Maybe I’ll start an Only Fans when I have my dream body, and I wear a mask then I’ll reconsider. For now, I’m okay doing this on the low’.

Every day, these women conceptualise their own shoots, produce them, maintain sustainable relationships with clients whilst trying to stay in tune with current adult content trends. They are basically one-women production and marketing companies, run out of their homes. A lot of people discredit the amount of work that goes into creating and maintaining a career in this field and tend to think it’s easy money but it requires very calculated and deliberate business savvy.

“People think sex work is something you do when you run out of options. That you must have failed at everything else and run out of options that’s the only reason you’d be naked on the internet. It’s really disgusting because this is my career and it should be just as respected. It’s my body.” – Pinky

‘It was very flexible and it was something I enjoyed doing, so I figured I might as well make money from it. You have to have a skill most definitely, you have to be able to talk to people and adjust to their needs. It’s not something you can do for easy money, and nowadays the market is oversaturated with influencers who are looking to make a quick buck off it when it’s really a whole craft that has to be perfected’.

Beyond people questioning the legitimacy of their work, these women also have to deal with horrible people online who wish harm upon them and make them fearful for their lives. For Maria, she does a lot of in-person meet-ups as a dom, and has faced scary instances where she fears for her life. ‘A lot of the time you meet entitled men who come to you, and pretend to be submissive. They have some thrill out of humiliating a dominant woman and create an unsafe environment. I have been places where I am actually scared for myself when I have to meet up with clients’ she admits explaining how unsafe the territory can be.

For Pinky, her biggest fear when moving her business to Twitter meant she was susceptible to family and past friends finding her online since she sometimes gets requests to show her face in videos. A big part of being a sex worker is establishing boundaries with your clients, particularly for Pinky as she’s had friends in the past deceptively guise as clients seeking to out her when she reveals her face.

Here in Nigeria, a collective progressive attitude towards sex workers is still a myth, given how deeply conservative and ‘moral’ our society is. Unfortunately, this still means conversations surrounding sex work and female autonomy are usually lacking in any real depth. African women are taught purity culture and expected to conform at all times, which leaves women either never exploring or feeling guilty/met with disdain if they dare to.

Sex Sells, and it’s a bit odd that men are often allowed to benefit from women’s sexuality – e.g a pimp isn’t usually met with as much degradation as his sex worker often is. In Nigeria, the word ‘ashewo’ (which means prostitute) is used as an insult to every woman in the way ‘hoe’ or ‘slut’ is, once we do anything they don’t like. Sex workers from these parts are always met with judgment and disdainful comments from people who’s sole aim is to shame them for their line of work.

These women are braving the harsh environments they live in to do work they love, and their defiance from the set norms are a bold statement for women like them. We’re always discussing why we should end the attacks against women in the workplace, without really including sex work in that conversation. Well, it’s demon time, and these women are not hiding in plain sight anymore.

While countless industries have been ravaged by Covid-19, Only Fans and its many variations are only going to start taking more shape in Africa.

*Fake names have been used to protect the identities of those we spoke to.

ICYMI: The importance of a song like “Body Count” for African women

Next Article Best New Music: Omah Lay’s “Damn” is a declaration of assuredness