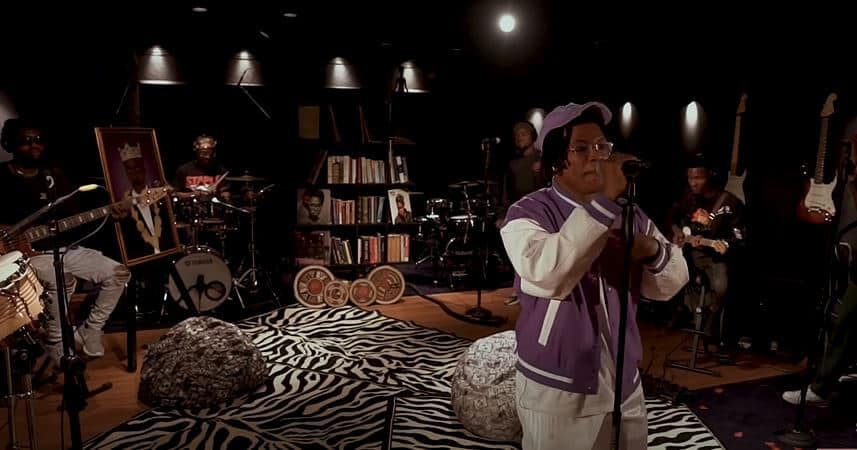 A sleek, Funk-indented cut off the Def Jam Africa-curated soundtrack for "Coming 2 America"

In the recently shared multi-artist Tiny Desk concert, put together in support of ‘Rhythms of Zamunda’, the Def Jam Africa-curated soundtrack inspired by “Coming 2 America”, the most visceral run is somewhere in its middle section, where Alpha P blocks out nearly four minutes for a raucous performance of his contribution, “Jiggy Bop”. Shot in the instantly identifiable Clout Africa studios in Lagos, the singer/rapper is supported by a live band and a hype-man, as he embellishes the stomping energy that makes the recorded song an instantly infectious, swaggering banger.

Mostly comprising previously released songs from artists across Africa, the soundtrack does a great job of capturing the continent’s musical heterogeneity. For the most part, though, this packaging seems largely targeted towards previously unfamiliar listeners, since the previously initiated already understand the ethos behind the compilation. Like the other handful of new additions—Tellaman’s “Overdue” and Bonj’s “Ain’t It True”—Alpha P’s “Jiggy Bop” is a shot of freshness to a project filled with older songs. From the 4-bar drum count that opens it up, the song quickly grabs attention, holding that momentum right through to the end.

Produced by go-to collaborator TMXO, “Jiggy Bop” projects sonic references from George Clinton’s brain-melting psychedelic Funk, the mysterious disco of William Onyeabor, and the elastic Funk-indented Hip-Hop bounce of the Neptunes. At that, these references feel secondary to the symbiosis between Alpha P and TMXO, an established combo that continues to strengthen its chemistry by building and bonding on signature individual quirks. In addition to the shimmering piano chords, slightly animated bass guitar riff, synthesised funk guitar sprinkles, and meaty drum groove that form the musical foundation, the chanted chorus also echoes TMXO’s distinct touch, a trademark made evident on the producer’s eponymous EP from last year.

Proving to be a more magnetic presence in front of the mic, Alpha P picks an intriguing pocket doesn’t always land on the beat, choosing to fall forward at several points, in a way that emboldens the excitement of his songwriting. “We gorillas, we be running up all night”, he quips on the pre-chorus, as he puts in a boastful shift where he namechecks Zamunda’s Prince Hakeem. On “Jiggy Bop”, Alpha P runs with the fun direction of TMXO’s beat, and in the process, they create a feel-good thumper that could very well become a cross-continental party starter, on the back of its placement in the soundtrack for a hugely promoted film.

ICYMI:BEST NEW MUSIC: DARKOO PUTS HER TWIST ON ROMANTIC VULNERABILITY WITH “PICK UP”