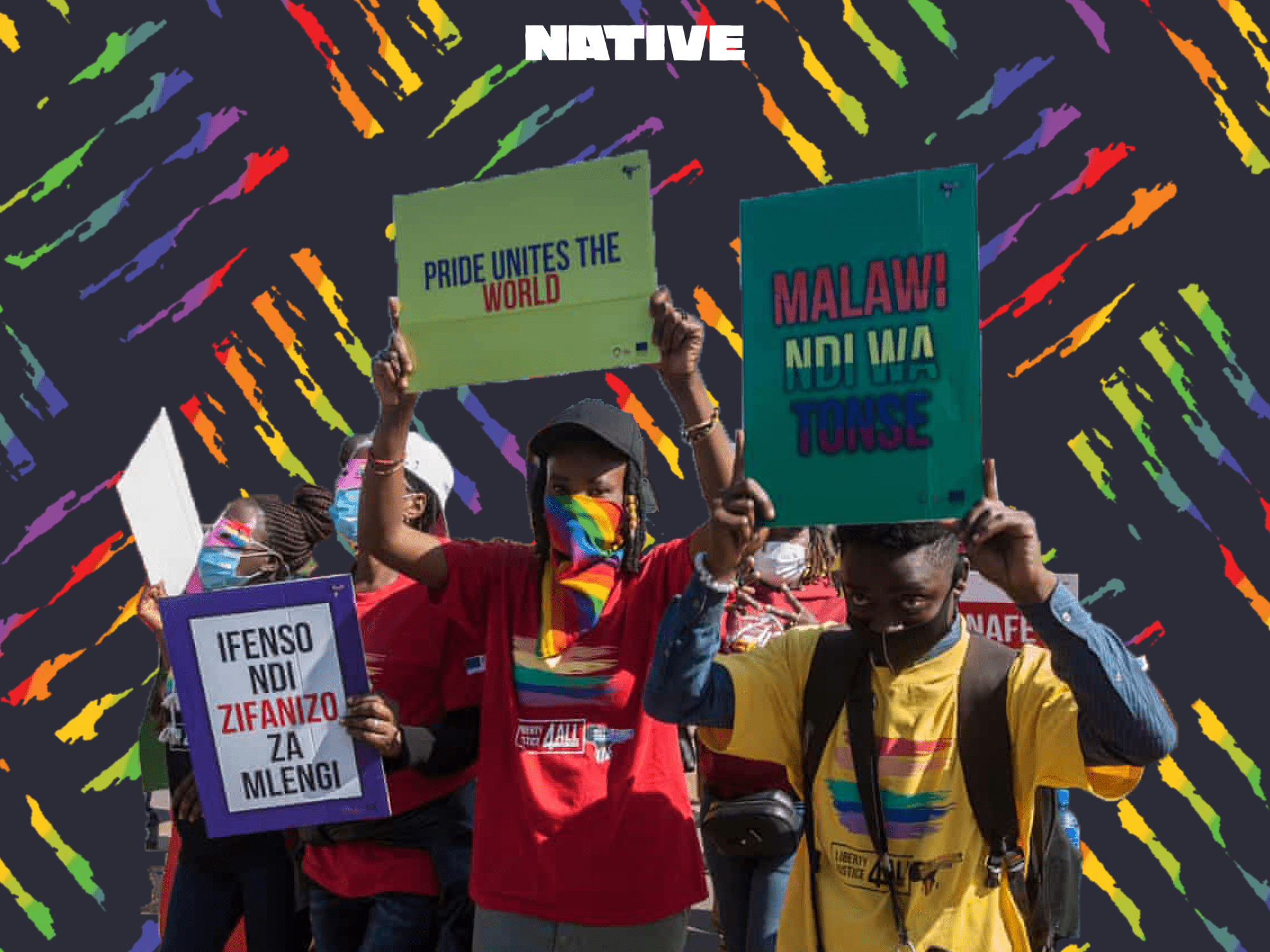 What Is Going On: A round up of Pride Month In Africa.

It’s easy, as a queer person, to think of June – the month of Pride – and feel a sense of warmth that for once in a year, all parts of our identity get to be celebrated and uplifted, loudly and proudly. Whether this is by capitalistic machines drowning their products in rainbow colours or allies performing allyship at a higher rate or even just attending a pride parade with a bunch of friends – while wary of forced police presence. Pride is a month that reminds queer folks around the world of the ongoing fight for liberation and freedom but this is not the same for queer people living in many parts of the African continent where LGBTQ+ rights are still violently frowned upon.

Queer liberation commemorations in countries like Nigeria, Ghana, Cameroon, Uganda, Kenya, amongst the 34 countries where LGBTQ+ rights are still illegal, are a harsh reminder of the gradual but painfully slow battle towards freedom and full humanity. To be queer in Africa means existing in constant awareness of the tragedy happening around you while you try to find small pockets of joy wherever possible. It means waking up to the news of trans women getting sent to prison in Cameroon while planning a cookout with your other queer friends in Nigeria. It means getting information that yet another queer man has been killed in South Africa, just for being queer, while you’re cradled in the arms of your partner. To be queer in Africa is to celebrate Pride month with tears in your eyes and a heaviness knotting itself tightly before sitting in your chest.

For today’s Pride Day What’s Going On special, we compile a list of significant events for Pride folks in Africa during and just before Pride Month. From devastating events like LGBTQ+ activists in Ghana getting arrested for attending a workshop and being denied bail, to even more devastating news of the online bullying experienced by trans people in Nigeria.

While there were moments – small and far in between – that brought queer people joy, they were eclipsed, very quickly, by these unending tragedies, which are able to be more aware of, thanks to social media.

The Unlawful Arrest And Bail Denial Of LGBTQ+ Activists In Ghana

On May 20, 21 LGBTQ+ activists were in a workshop session in Ghana’s southeastern city of Ho when they were ambushed by journalists who, holding them hostage, made a call to the police force and alerted them to the gathering.

In a matter of hours, all of the activists, 16 of them women and five of them men, were arrested under the charge of “unlawful assembly” and planning to promote and “advocate for LGBTQ+ activities.”

According to a report by Reuters, the “assembly” was actually a workshop set up to “share insight on how to document and report human rights violations being experienced by LGBT+ Ghanaians,” organised by Rightify Ghana,  a human rights organisation that has been amongst the prominent bodies – including LGBTRights Ghana and Silent Majority – fighting against the increasing level of state-sanctioned hate and violence being directed at LGBTQ+ Ghanaians since February.

This arrest, which had no provisions for bail and meant that these activists were in police custody the duration of their sentencing, would go on to last for a month. Carrying over into pride month and being a primal point of focus for many concerned about the situation queer Ghanaians are currently in. On social media, the hashtags #ReleaseAllThe21 was created and the campaign for the release of 21 queer folks who have committed no crime began.

The group was denied bail twice and in some of the reports on the issue, some of the activists were seen crying after the court ruling on June 2 after being asked to reappear in court on June 16. But on June 11, thankfully, The 21 were finally granted bail, required to pay 5,000 Ghana cedi ($866) and to provide sureties. Although this was a source of relief for many, the case is still ongoing, and queer people are still being prosecuted even though these prosecutions are blatantly against all existing human rights laws that Ghana abide by.

Do you know 21 LGBT activists were arrested two weeks ago in Ho for unlawful gathering and they’ve been denied bail? We’ve tried all we can but to know avail. #ReleaseThe21 pic.twitter.com/sppfPcbnX1

In April 2021, it was reported that four gay men in South Africa had been killed in less than a month. Amongst these victims were 22-year-old Lonwabo Jack, news that was, as expected, a source of immense grief for many queer folks around the world. That grief is one that still lay fresh in our hearts when the news of another gay man getting murdered began to circulate; Aubrey Boshoga was stabbed to death, in what his family and friends suspect to be a hate crime. At this time, there are no conclusive reports as to whether or not his killers have been found or are even being looked for, but Boshoga’s death makes him the tenth south African gay man killed within the space of three months.

Two Trans women in Cameroon sentenced to five years in prison, for being trans.

After awaiting trial for over two months, two transgender women were sentenced to five years in prison after a Cameroonian court found them guilty of “attempted homosexuality.” Shakiro and Patricia were dining at a restaurant in Cameroon’s economic capital, Douala when they were arrested in February earlier this year.  Since the arrest, the case has been heavily criticised by the public, still during the verdict, Shakiro and Patricia were found guilty of so-called “attempted homosexuality” and also withholding proof of their identity, for which they were fined  200,000 CFA francs ($370).

According to existing reports, Shakiro, a prominent figure in the media who had been using her platform for self-expression and advocacy, has disclosed her intention to starve herself to death while in prison. The women have spent this pride month in jail for doing absolutely nothing but exist. And if all goes according to the plan of the Cameroonian justice system, these women are about to spend five more incarcerated.

Picture this, it’s only been a few days into pride month. Things seem to be getting a little calm, queer folks have just got off the bittersweet celebration of the release of the activists in Ghana and of course, are still grappling with issues like the arrest of the transwomen in Cameroon and the killing of trans folks in the U.S. There is hope that at least the rest of the month will unfold with some level of kindness and just as that hope begins to grow, a powerful writer pens a three-part essay. In that essay, the writer – who has previously expressed and supported transphobic views on which she has been called out but refuses to back down – details her grouse with individuals who spoke out publicly against her views. The essay was a look into how she fell out with these people, but it was also an opportunity for transphobes to validate transphobic rhetoric. These rhetorics around whether or not trans women or trans folk, in general, are seen as a different, othered identity shamefully went on for days. It inspired a 24-hour clubhouse room held only by cis-gender identifying folks, with no trans person present to correct the many misconceptions and false assertions being made with inaccurate facts and zero experiential understanding of what it really means to be trans.

It inspired an article, many articles; threads and tweets on the notion that cis-gender women are out to be erased and their struggles wrapped up and tucked away somewhere out of focus (all of which are factually untrue). It emboldened transphobes to misgender trans and non-binary folks, cast human beings as theories, concepts, and speculations. But most importantly, it reminded queer Nigerian folk, particularly our trans siblings, that true allyship is yet to be realised and that as much as we might lend support to other marginalised folks, there is almost no certainty that they would also come through for us.

More than anything, it robbed us of days and hours we could have spent enjoying pride month in our own way. During that time, it was very easy to forget that this is a month for trans folks whose lives are dissected and discussed with derision and inhumanity.

IT IS OBSCENE: A TRUE REFLECTION IN THREE PARTS | Chimamanda Ngozi Adichie https://t.co/fDdiNWwTHP

Yes, good news! In what has been a month filled with hordes of heartbreaking stories, it is exciting to see Malawi hosting its first pride parade. The event which is took place over the weekend (at the time I was writing) is a cause for celebration despite the fact that Malawi is one of the most homophobic countries in the world. Same-sex unions are currently illegal in the country and LGBTQ+ folks are at risk of getting arrested, but this hasn’t stopped pride celebrations from taking place. Queer Malawians are using this march as an opportunity to call for a reform of the anti-LGBTQ+ laws in the country. And seriously, we absolutely love to see it!