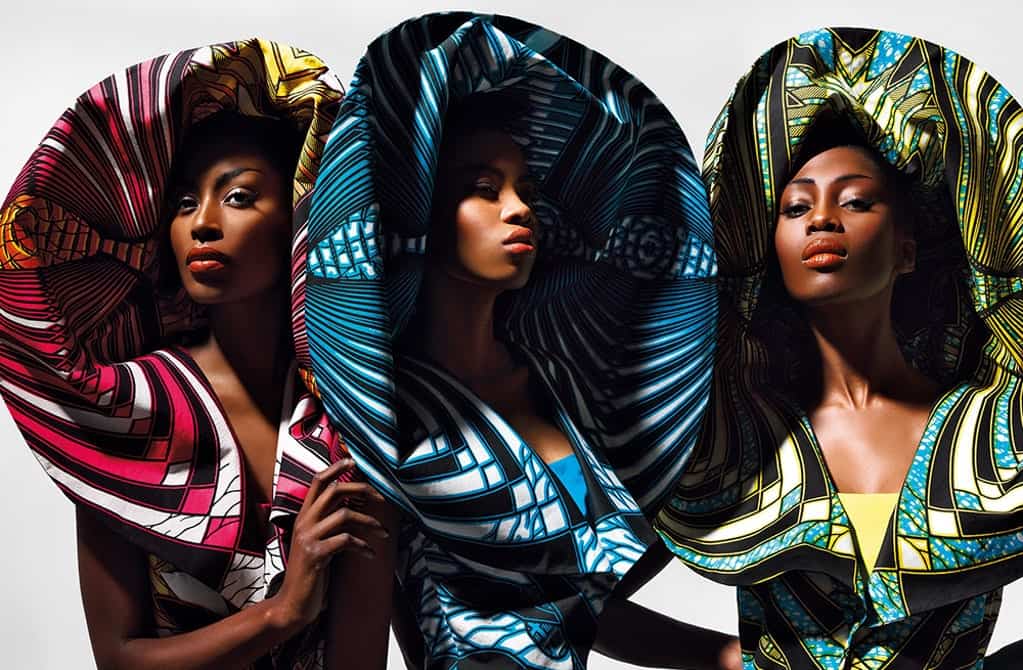 Rhetoric or Action: As Vlisco unravels, it’s time they picked a side

As plans for the acquisition of Vlisco by a conglomerate, Made In Africa seems stalled, we examine the position the fashion giant ought to take for the greater good.

In January 2015, Dutch designers, Viktor Horsting and Rolf Snoeren debuted their Spring/Summer 2015 Haute Couture collection. Nicknamed “FlowerBomb” by fashion enthusiasts, the critically acclaimed collection expanded Viktor and Rolf’s oeuvre as a design label, and also elevated Vlisco, the Dutch textile giant with whom they had collaborated into the highest levels of global fashion. Following the success of Viktor and Rolf’s Haute couture collection (which was immediately purchased in its entirety by white private collectors), other designers like Stella McCartney and Maria Grazia Chiuri of Dior began to muscle in on the print, stripping it of its cultural heritage while significantly marking up its prices.

There was something conspicuous about Viktor and Rolf’s collaboration and the appropriative collections it inspired, which highlighted the absence of the overwhelming propaganda Vlisco has sold its prints and brand for the last 200 years. There was no mention of Vlisco’s “African” heritage, its long history of shipping exclusively to Africa, the African cultures that inspire its prints and motifs, but instead, they branded themselves in that moment as a Dutch brand, who was collaborating with a Dutch-owned design label, to celebrate Dutch design. 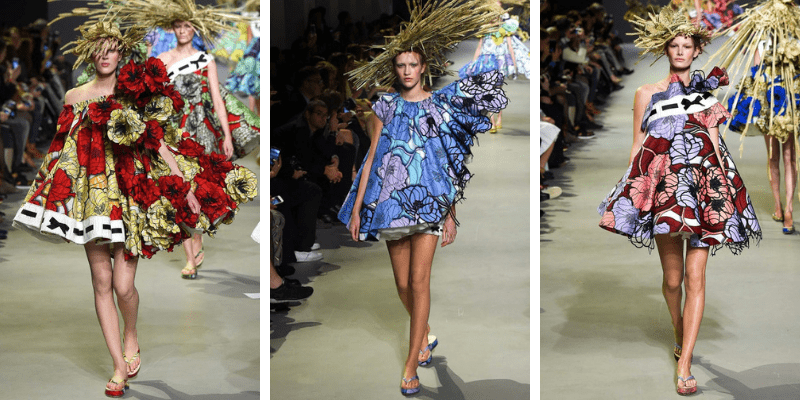 Like Viktor and Rolf, when Stella McCartney and Dior faced significant criticism for what African fashion commentators labelled as “appropriation for profit”, they countered with the assertion that Vlisco as a brand, and Dutch wax as a print, retained its European heritage and as such was available for them to use, completely disregarding the cultural explosion that Africa has experienced in the last decade and the mass commercialisation of culture from the continent by multinational organisations seeking to make profit. Champions of this kind of assimilation have accused critics of Dior, Stella McCartney and Vlisco itself as being proprietary with culture.

This is a dishonest argument, considering the unique history of Vlisco as a brand and the product on which its legacy is built. Dutch Wax, imitates an East Indian dyeing technique called Batik, and remains an important part of Javanese dress and culture. Seeking to profit off the culture of this region, and finding an accidental audience in West Africa thanks to colonial trade, Vlisco redesigned its entire business model and branding to align itself as an African brand while keeping its manufacturing and profits in Holland. Over the years, the brand has taken similar ‘influence’ from other cultures and rebranded them as African, in its bid to remain attractive to the African markets that make up their primary audience. While exploitative, Vlisco’s business choices are not illegal. They cannot, however, be extricated from the rest of Holland’s colonial legacy which includes forced slavery and the exploitation of natural resources in many of the countries where Vlisco currently operates. As the world collectively reckons with the legacy of colonialism and the disproportionate imbalance of wealth that era caused, brands like Vlisco have become a lightning rod for conversations on appropriation, exploitation and reparative justice. Just last year, Joe Penney wrote exposing the fact that until 2019, Vlisco supported an annual blackface ritual in the Netherlands.

An enduring consequence of colonialism and its enduring legacy is racial profiling. It is evident in most aspects of modern life where value is exchanged, especially in the world of fashion, which has become a multi-billion dollar industry thanks to industrialisation and globalisation. Across all levels of fashion, from manufacturing to design to merchandising, positions of power are overwhelmingly held by white persons with occasional concessions to diversity as a way to retain the continued patronage of the majority non-white markets who are expected to sustain these industries. Many of the artificial barriers created to justify colonial asset grabs remain in action today, evolving as technology and finance also evolve.

When these barriers have been highlighted by Africans and other persons of colour, and definitive change demanded, a common refrain has been for Africans to buy their way into these institutions and facilitate the change they want to see from within. A former employee of Vlisco, who spoke on the condition of anonymity, fearful of the backlash that usually accompanies the truth in the corporate fashion world, describes situations where Nigerian officials were promised that Vlisco would create 10,000 jobs for locals in exchange for access, agreements that were then contravened, as Vlisco allegedly adopted exploitative practices in how it engaged its local workforce. The company’s accounts were frozen and their operations in Nigeria halted when officials realised the company had no intentions of fulfilling its obligations.

“it is very obvious that during my time at Vlisco there were a significant number of Africans within the company and in key management roles, ensuring that the company became mindful of its operating environment. Over the past 3 years they (sic) have managed to kick out 99% of all the black people in key central roles all in the name of restructuring while hiring more Dutch and South American employees.”

In 2020, the AfreximBank served as a proxy for Made In Africa, a consortium of prominent African entertainers and entrepreneurs who wished to buy into the troubled Dutch company, which was rescued from bankruptcy in 2010 by British investment firm Actis. With prominent figures such as Lupita N’yongo, Kojo Annan and Burna Boy all fronting this investment drive, the Afrexim bid seemed like an important step towards repairing the fractured image the brand has globally, and welcoming a truly progressive shift in the company’s values and operations in Africa, and was received with a lot of fanfare:

“I cried when I learned about Made in Africa and that Vlisco would finally be African owned,” says Hélène Faussart, half of the golden era soul and hip-hop duo Les Nubians. “As a Cameroonian woman, I’ve always loved these fabrics as a symbol of African culture. But I struggled to support this company knowing there is no black ownership or leadership. African Cultural matters & products should be owned and managed by Africans.”

However, it seems this collective joy was premature.

The proposed deal has dragged on for more than a year, even though by all reports, there are few other bidders willing to match the offer raised by Afrexim’s consortium, and on paper, the consortium provides not just a financial reprieve for Actis (the British owner of Vlisco), but also a rare chance to salvage the brand’s image and reposition it for global success. This reticence is hard to process, considering the brand has lost a fair bit of ground on the continent. Nigeria, its largest consumer market, introduced  bans on imported textiles, which suspended a 2015 MOU with Vlisco to expand into the Nigerian market. The current situation in Ghana isn’t looking so promising for Actis, either.

A former high-level government official in Ghana offered us some insight into a possible difficult future for brands like Vlisco, who have relied on “secret patents”, the exoticism around European made products, and weak infrastructure in importing markets to protect their market share, “Following our president’s assertion that Ghana will no longer export raw cacao and then allow the Swiss to make chocolate, you can expect us to take a similar stance on printed textiles – particularly those that mimic our ancestral African designs.”

In addition to problems in Ghana and Nigeria, there have been accusations of fraud in its Congolese division, as well as shrinking markets in much of its African Francophone market. These are mounting, serious concerns that perhaps triggered the brand into entering the reported exclusivity period with Made In Africa in the first place, as one would think having powerful African allies on its board and financing its future could be useful in navigating these issues.

So why the delays?

Wealth structures for many prominent contemporary businesses were built from colonial foundations and designed to exploit African countries. While these institutions can parade as progressive, any attempts to truly diversify the management at canonical brands like Vlisco trigger deeply embedded structural barriers. Sources close to the deal point towards hostility from players within Actis. The motivations for this hostility have reportedly been pinned directly on escalating racial tensions in Vlisco’s upper management and the belief that an African majority shareholder would tip the precarious balance of power within the company’s leadership – something that does not sit well all the way back in the U.K. and the Netherlands.

It is important to note that wealth, and the power it accrues, is shifting from European economic strongholds dependent on generational wealth amassed through brutal colonial theft and exploitation, towards a modern idea of wealth, driven by an egalitarian market. Modern millionaires, many of whom have come from the South East and Africa are minted through personal ambition and democratised economies. The world is reckoning with China, which has its own scruples but is less concerned with aristocratic heirs and exclusionary politics that were inherited from colonial conquest.

As African startups in technology and finance – such as Flutterwave and Paystack –  build products geared towards their own markets and muscle out Western interests who have long ignored the continent unless it was to exploit or manipulate for political reasons, and long-standing ‘partnerships’ between African producers and European manufacturers are renegotiated with a view towards restorative justice, the idea of the African majority shareholder entering institutions considered traditionally white-owned is generating a lot of anxiety in these spaces, and triggering the kind of passive hostility and attempts to delay pivotal deals or derail them all together, which seems to be the case here.

The true test of this new order is not if it will grant Africa’s new millionaire venture capitalists access to elitist institutions like Vlisco, it is when this will happen and at what cost.