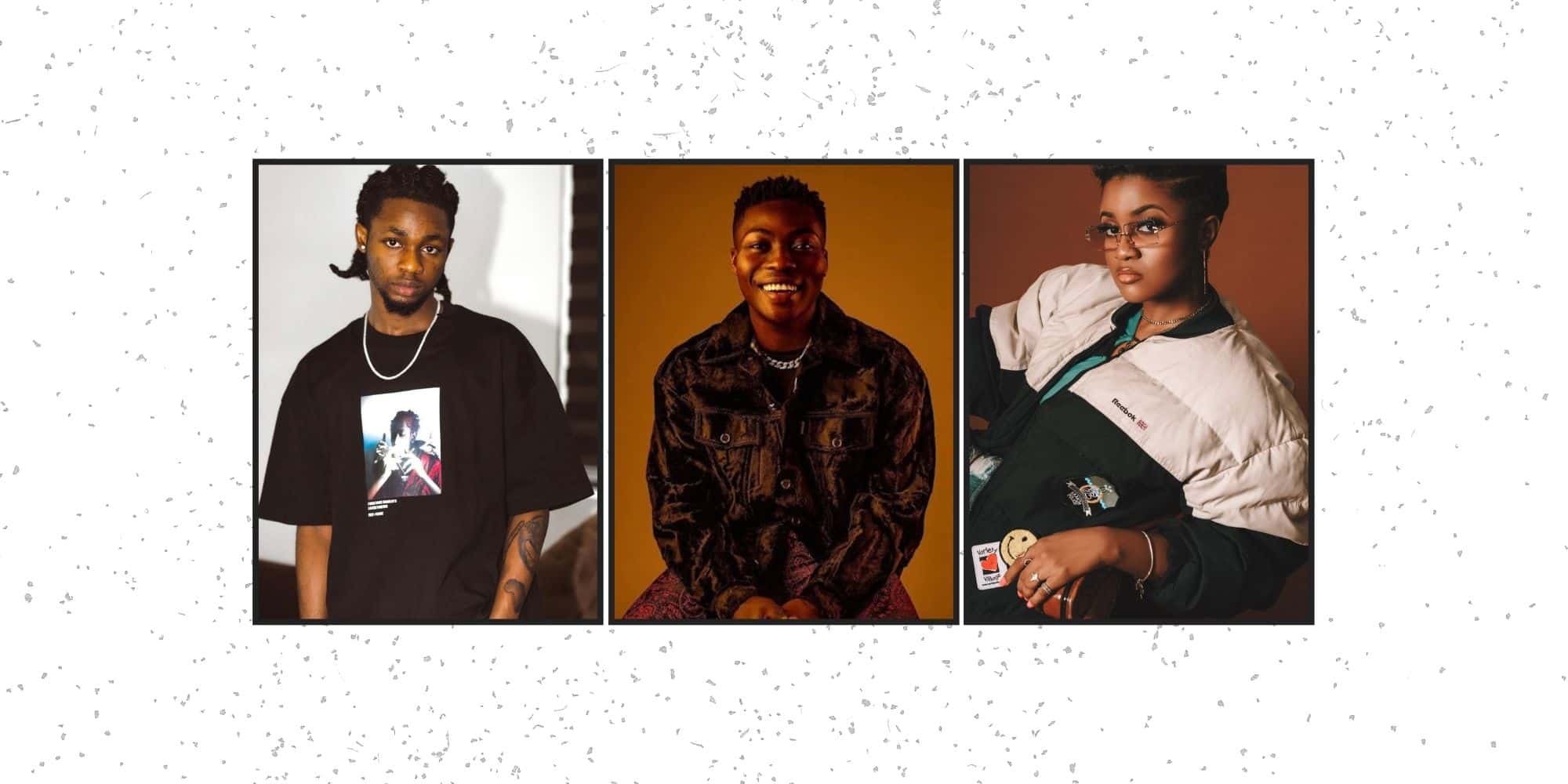 That’s where our Songs of the Day column comes in. We’re doing the work to stay on pulse with all the music coming out from across the continent and beyond, bringing you exciting songs of tomorrow: today. Last time out, we had exciting music from The Caveman, Mayorkun, Wande Coal and more. Today, we’re bringing you new music from icon Banky W, Omah Lah, Reekado Banks, Phyno & more. Listen in!

After taking a break from releasing any music, Banky W is here with his first single in over two years. “Jo” is a mid-tempo tune that finds the artist serenading his muse who happens to be played by his wife in the accompanying music video. His lyrics speak to the love shared between them. He sings “Yes you are far from regular the life of the party, I wanna be right where you are/Girl na you dey burst my medulla,” revealing the fervour of his devotion to her. Despite taking such a long time off the music, it goes without saying that Banky W’s still got that ineffable charm.

Omah Lay has been on a roll since stepping into the scene. Just this year alone, he’s already released the chart-topping single “Understand” and made a guest appearance on the Masterkraft remix to Justin Bieber’s “Peaches” with Masterkraft. His latest, “Free My Mind” is an uptempo track that celebrates the importance of enjoying the moment with no worries. Over the catchy hook, he offers the line “Free my mind, free my mind dey shayo,” delivering a song coated in his familiar melody-driven sound. “Free My Mind” sets a vast tone for Omah Lay’s musical dexterity as he takes a welcome departure from his earlier singles and delivers a number that speaks directly to his Port Harcourt roots.

Fresh Meat alum, kZm has just released two new singles titled “Midnight” and “Alienated” to round off the year and both happen to widen the scope of his discography and give a clear indicator of his style. On the romantic number “Midnight Star”, he trades in his raps for a mellow flow which provides the perfect background for him to fire off his romantic lyrics. Over the mid-tempo production, he sings “It wasn’t love until I met you baby, Oh baby you’re the only way/It wasn’t love until you hesitated then affiliated yourself with me,” addressing a lover who he can’t get off his mind.

Barely a year from the release of his sophomore album ‘Off The Record’, singer and songwriter, Reekado Banks has just released a new EP titled ‘OTR, Vol.2′, the second installment on his off the record series. The 5-track project finds the singer bringing his familiar warmth and enlivened touch to the burgeoning Afropop space. On the standout P.priime-produced track “Lupita Nyongo” he sings about the beauty of Black women, likening their beauty to that of Lupita Nyong’o. The uptempo number pairs P.priime’s rapid-fire production with Reekado’s undeniable charm resulting in an enjoyable number that deserves to feature on your rotation this week.

For his latest release of the year, Ghanaian singer and songwriter Twitch 4EVA returns with “Give Up”. The Yung D3mz-produced track finds the singer delivering a heart-filled appreciation track to those who deserve flowers in his life. He shouts out those who supported him to this point in his career. “Dem say make we never give up/Dem go show you true colour,” he sings over the song’s catchy production, leaving listeners with helpful advice for how to navigate similar situations and rise from it.

Phyno – “Do You Wrong” ft Olamide

Adding to the streak of their incredible collaborations, Phyno and Olamide team up again for the unmissable number, “Do You Wrong.” Over the mid-tempo production, both artists address the women in their lives and promise their unwavering devotion to them. “Say I no be perfect man but I no go do you wrong, why would i do you wrong tell me why would i do you wrong”, Phyno sings over the first verse, laying down his true feelings for his lover. Olamide joins him on the next verse, delivering an equally heart-rendering performance and reinforcing their legacy which ranks among the most powerful in the Afropop space.

In preparation for his forthcoming project, producer, singer and songwriter Jess ETA has just released his first offering for the year, the groovy number titled “Skata.” The mid-tempo track finds the artist appreciating his muse’s body and serenading her with sweet words. On the chorus of the song, he quips “This your backa don scatter the place/This your waist odikwa necessary o,” expressing the effect her presence has on him. The accompanying Imraan Christian-directed video fits the song’s romantic move as it features a number of angel-like dancers enthralling viewers with their movements.

Nigerian born Canadian based singer, songwriter, and performer Bosaboi is here with his third official solo single of the year titled “My Ways”. Over the bouncy production of the track, he speaks about elevating, changing his ways and being a better version of oneself. On the hook of the track, he sings “Tell a badman wanna come my way/I was outside when they left me in the rain, Now I’m inside and the rain champagne”, tackling the pains of his past while trying to stabilise his current emotions.

Basketmouth might be one of the music industry’s best-kept secrets. After delivering his fine debut ‘Yabasi’ earlier this year, the singer has now followed up with a new single titled “Trouble”. The track finds him linking up with 2Baba and Blaqbonez for an up-tempo number that finds each collaborator at their most braggadocious. Over the song’s hook, Basketmouth sings “See me see trouble oh/How this one take concern me,” delivering lyrics that will certainly have any listener on the dance floor.

Following the success of their 2019 collaboration “Anywhere”, Ms Banks and Naira Marley are at it again. Their latest “Party” finds them celebrating the December party season which is just around the corner. The Rexxie-produced track finds both artists deliver a catchy number that ties into the upcoming festive season and pairs familiar, danceable production with quotable lyrics.

Over the weekend, singer and producer, Dunnie released a new project titled ‘AMAZON’. The 8-track tape features a spate of talented artists such as The cavemen, H_Art The Band & Darassa. On the standout track “Oh Baby” featuring the Afro-highlife band, the Cavemen, she sings about her plan and intentions for her love interest and their future together. On it, she offers the lyrics “oh baby, I must to marry you my baby/I don see my lover, no more cunny cunny,” a line armed with instantly catchy melodies that you might well be humming after one listen.

Nigerian singer and songwriter, Browny Pondis only began his musical journey a few years ago but already his skills are vastly improving with each new release. Next year, the singer is gearing up for the release of his debut EP titled ‘October First,’ an introspective 5-tracker that is aptly inspired by his country’s Independence day from colonial rule. Ahead of this, he’s shared a new single titled “BAMBILA,” a romantic number about an unrequited lover who he met under the dimly-lit lights of a nightclub.

South African singer and songwriter, Bonga Kwana is a fresh-faced charmer who weaves nostalgia, tradition and queer culture into her beautiful and emotionally layered music. The singer has just shared her sophomore EP ‘New Faces to Old Problems,’ which features the chart-topping promotional single “Ndifuna Wena” featuring Ntsika which held the No.1 position in the 5FM Pop charts for three weeks running and continues to grow. “Lace,” is another standout from the project which showcases more of Bonga’s airy vocals and soul-baring songwriting. “I’m coming with the intention to love you for the rest of your days and more,” she sings on the song’s first verse, addressing a lover who she feels attached to like lace.