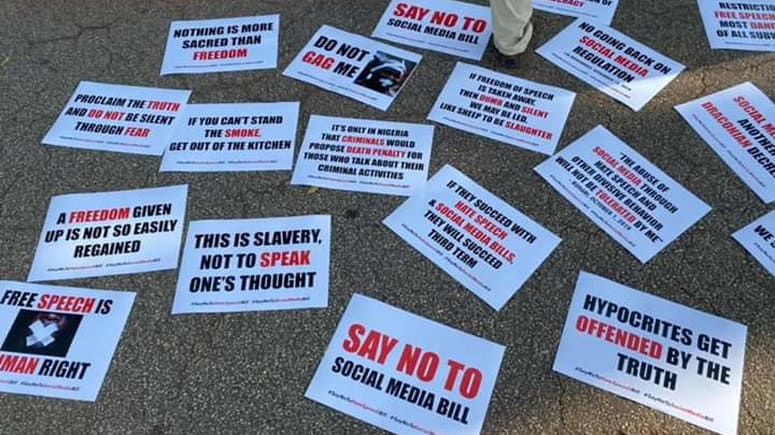 Once again, the Social Media Bill is being discussed in the Nigerian House of Assembly following the month-long #EndSARS protests that swept the nation. During the protests, we noted that there was uneven attention being paid to the coverage of the gross human rights injustices taking place around the country by local press due to several warnings from the National Broadcasting Commission.

For many of us, social media became the quickest and fastest way to disseminate information about the protests and call our leaders out for their failures. The young Nigerians raising their fists and placards on the streets would make plans on our social media timelines and logistics would promptly be arranged. It was also where we witnessed the atrocities that took place on the 20th of October and it’s also how we are learning about the true events taking place in Oyigbo, Rivers State. Last week, footage from the Lagos state House of Assembly revealed members who were displeased in how young Nigerians and social influencers had begun using social media. The likes of Desmond Elliot and Mojisola Alli-Macaulay called for stricter sanctions on social media because of the widespread dissemination of unverified information they believe was spread during a time of national crisis.

This footage is worrying for many reasons. For one, the problem with the bill is the idea of who gets to decide what constitutes as false information and manipulations. First introduced back on November 9th, 2019, the bill titled ‘Protection from Internet Falsehood and Manipulations Bill 2019’ was sponsored by Senator Mohammed Sani Musa, representing Niger East senatorial district, with the aim of regulating the menace of hate speech and fake news. Within the ambits of the bill, it is a punishable offense for an individual to transmit a false statement as fact, with prejudice to Nigerian society whether you’re within or outside of Nigeria. This also covers the health and safety of the country’s citizens, influences the outcome of an election in Nigeria, amongst many other things.

The punishment for this crime is “a fine not exceeding N300, 000 or to imprisonment for a term not exceeding 3 years or to both”. Many analysts are concerned that this bill, and rightly so as should it be passed through the Senate, it would greatly infringe on people’s human rights to freedom of expression. For many young Nigerians, there is a shared understanding that this could be used by our government as a tool for internet censorship, raising concerns that the bill’s true intentions may be to stifle political commentary and anti-government scrutiny in light of cases against journalists and publications like Premium Times. During the protests, we watched in real-time how atrocities were committed, from the viral video of the politician at Abule Egba who fired into a crowd of protesters when he was denied audience to DJ Switch’s harrowing Instagram Live videos at the Lekki toll gate on the night of the massacre. We also watched how the Nigerian Army has been on a “fake news” spree, branding things we witnessed via Instagram Live as fake news, showing us just how easy it is for those inc charge to bury what social media is able to unearth in real-time. Till today, none of these offenders have been prosecuted for their crimes.

The Nigerian government is more concerned with silencing free speech online than on protecting their citizens. Many other African countries have done this in the past, for example, countries like Zimbabwe, Sudan, and the Democratic Republic of Congo have forced internet shutdowns in the last year, and Tanzania, Uganda, and a host of North African countries have stringent subsisting rules relating to use of social media and digital publishing. 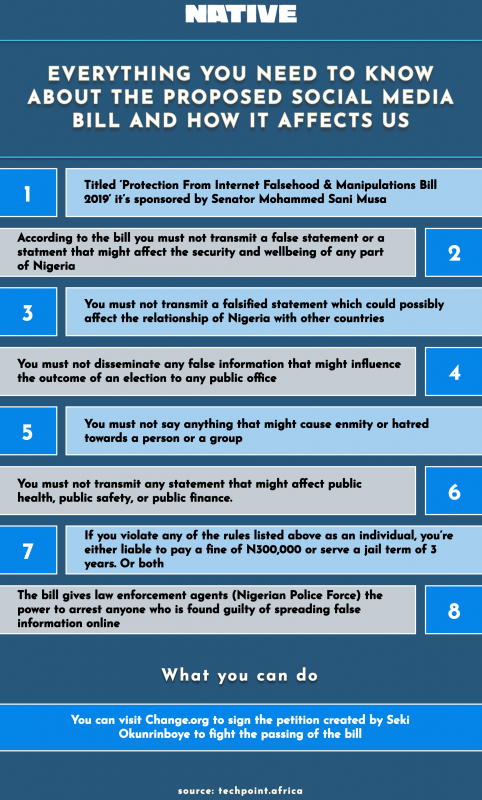 Earlier in the year, a public hearing held on the 10th of March at the National Assembly saw most speakers, ranging from civil groups, government agencies, and average citizens, on the day in opposition to the bill, highlighting the fact that the bill could be abused by authorities, essentially violating the Human rights of average Nigerians. Speaking at a public hearing, the executive chairman of the National Communications Commission (NCC) noted that the bill gives unconscionable power to the Police to be the judge and jury of proper internet content. The NCC and the broadcasting organisation of Nigeria (BON), amongst others, agreed that most of the bill’s provisions were already captured in previous legislations such as the Cyber Crimes Act of 2015. Speaking further Sa’a Ibrahim, chairman of BON, remarked that the bill is “undefined and misleading”, adding that its purpose was not necessary.

In the aftermath of the protests, more leaders from around the country have been calling for the adoption of more stringent rules on internet usage in the country. Today, news that the Northern leaders were in support of the federal government’s quest to censor social media reached us and many young Nigerians are not too pleased. Many leaders in the North shared that the #EndSARS protests had become “subversive action” intended to divide Nigeria and shared that unfiltered checks on social media had led to the devastating spread of fake news. We were reminded once again that the battle is far from over until the focus of our leaders is on the rampant loss of Nigerian lives and not on social media reputations. Evidently, many are feeling the heat of the continued international exposure.

It has become clear that our leaders see our demands for better on social media as an affront to their elderly age and status, a key marker of the gerontocratic Nigerian system that seems to have built the political sphere. While we agree it’s important for us to take a definitive stand on fake news and hate speech, especially in a culturally diverse country such as Nigeria, we must ensure that the principles of free speech and open discourse remain sacrosanct. Nevertheless, conversations such as these are vital to entrenching the values of democracy in our society. The bill has passed through its second screening, and with increasing support from state leaders, it likely is likely to become law and potentially resurface down the line.

There is an online petition against the social media bill with close to 100,000 signatures. The target is 150,000, and you can sign the petition here.