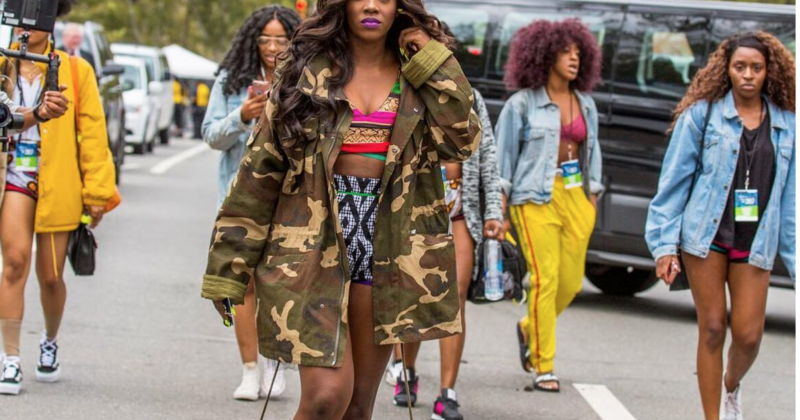 “Do you even hear yourself sometimes? Like when you speak?”

The famous words of Lorna Morello from OITNB, is a question we all are dying to ask Nigerian singer-songwriter, Tiwatope Savage.

In April 2016, Tiwa’s interview with ThisDay reporter Azuka Ogujiuba surfaced the internet and had everyone talking about “Edible Catering”, wondering why the reporter wouldn’t stop rolling her eyes at the teary eyed Tiwa as she recounted years of her husband’s infidelity and inability of providing for their son. A year and half later, Tiwa is giving us a real reason to roll our eyes.

Tiwa emitted the aura of a woman at peace with the world and herself as she sat down on TheBeatFM’s Midday Show with Tolu Oniru aka Toolz, to talk how her newly released Short and Sweet’ SugarCane EP, was embraced by her peers and fans.

Chuckling lightly as she struggled to play her cards close to her chest, Tiwa talked about meeting with British Rock Band, Coldplay, and teased at a new project underway.

Earlier this year, Tiwa Savage signed a management and publishing deal with Roc Nation, then she went underground, only occasionally returning to Nigeria to take on endorsement deals and perform at occasional shows. It was inevitable that after being away for so long, her interview with Toolz would segue into her personal life, achievements and her skyrocketing stardom. Also expected, was the conversation veering towards patriarchy and stigmatisation of women in today’s society, considering Tiwa’s own tumultuous marriage a year before and accusations that she had slept with her label mates for a leg up in the Nigerian music industry.

“It’s a reality” she said “I’m not going to say I’m completely comfortable with it but it is what it is, you have to deal with it, if it means you have to work 10 times harder than your male counterparts, don’t complain about it, do what you have to do”

While this looked like she was generally speaking, as she threw in Oprah Winfrey and Mo Abudu to emphassze on successful women who never had it easy getting to the top, it wasn’t hard to see she was subtly telling us, how much hard work she’s had to put in, just to be half as successful as her male counterparts, and her resignation at this injustice.

“Once you get there…” she continues, “…you don’t complain about how you got there, so whatever it is you have to do as a female, you just have to get it done”

This is a dangerously passive way of reasoning, as it reinforces the logic that enduring cruelty silently, and working 10 times harder is some kind of Godly virtue that comes with being a woman, a trait that every woman is naturally born with. Need we remind Tiwa that while she sits there advocating for patriarchy and reinforcing the superiority of men over women, the privileges she enjoys as a heterosexual upper middle class woman with access to an international education, allow her navigate the world much easier than the average woman.

The 37 year old singer who only recently, made history as the only Nigerian on BBC’s list of 100 most influential women in 2017, suggested women keep enduring, and not complain about the patriarchal system, disrespecting the progress and overlooking the fact that the sacrifices other feminists made for equality and liberation, is the core reason why women are able to enjoy some of the liberties they do today, like being recognised for their contribution in music, as well as politics, fashion and general culture.

The mother of one went on to add:

“I also don’t think men and women are equal, I don’t think that’s how God created us, especially in the household anyway, so I think as females, we realize that we can be strong in our career, but when we are home, we have to realize that the man is the head of the house”.

Coming from a country where oppression, under the guise of core traditions limits the woman, a system that has repeatedly failed to support and protect women against domestic and sexual violence, we would expect that Tiwa, a one time victim of this system, have empathy towards the situation of these women, some of whom don’t have male counterparts to work better than, as they are still struggling to come out of the bubble the patriarchal system has put them.

It goes further to show the misconception a lot of people have, regarding feminism, as feminism is dedicated to bridging the cancerous gap between the men and women in our society, a fight dedicated to equality, not superiority. And so it’s of utmost importance that we abolish this culture of silence, find our voice, take a stand and create in its stead the awareness of equality.

Here is to all the people dedicated to achieving this goal.

0322
Previous Article Stand up and “Grab The Mic” Nigeria, Comedy Central is coming for the next big comedian