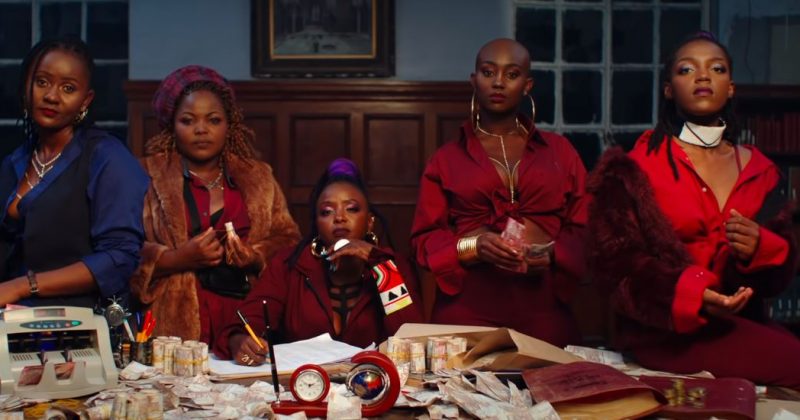 It’s Ghana’s independence day today and Ghanaian dancehall front runner, Stonebwoy has new music to help us celebrate it. He just released his 4th studio album, ‘Anloga Junction’, named after his hometown, with an accompanying video for the lead Spanker-produced single, “Good Morning”.

The song highlights Stonebwoy’s dominance, and sees him bragging about his wealth and success, and Dutch rapper, Chivv, also featured with a guest verse reflecting the same self-assured sentiments. The accompanying Azad Wastara-directed video confirmed the song’s lyrics, showing both artists are shown in a villa in Jamaica, partying with beautiful women who also dance to the beat.

Kenyan rapper, Muthoni Drummer Queen has been a bit quiet since she dropped her 2018 album, ‘She’, but now she’s back  come with her first release since, “Power”. He Swiss beatmaker duo, GR! and Hook produce the beat for her tribute to African and Kenyan women. Released during the Women’s History Month, she explained that the song is dedicated to “Women who organize and resist oppression, break molds and defy stereotypes, forge paths and occupy space”. The accompanying video was set at the McMillan Library in Nairobi which reflects Kenya’s colonial past.

UK rapper, Jords has just released a new single, “So It Go”, featuring Kida Kudz to remind us why we fuck with him heavy. The song finds him reconnecting with his Jamaican roots as he raps over the tropical beat produced by Wengi Kofia. Curtis Essel & Nwabugo directed the music video mirroring the song’s intention to tribute the rich and vibrant culture in Kingston, Jamaica.

Darkoo broke into mainstream last year after she released “Gangsta”, a romantic party starter featuring Davido, Tion Wayne, SL, Ms Banks and Br3nya on the remix. Her latest offering, “Juicy” featuring Hardy Caprio builds on her dancehall-inspired catalogue through her sultry performance appreciating the beauty of women over the Afropop beat produced by Diztortion. Capone directed the video for “Juicy” and set Darkoo on a runway in Los Angeles with beautiful models and featured artist Hardy Caprio.

Olakira just premiered the music video for “Aya Mi”, the lead single from his ‘Wakana Jollof’ EP. The project saw him attempt to capture the essence of music from Africa through romantic songs influenced by different regions of the continent. The video continues the thematic direction of the album as Olakira walks around a playboy-esque mansion with doors labelled after different countries like Morocco, Ghana, etc.

0000
Previous Article Rap Song of the Week: Sizz The Truth’s “Be Yourself” is an ode to trusting the process