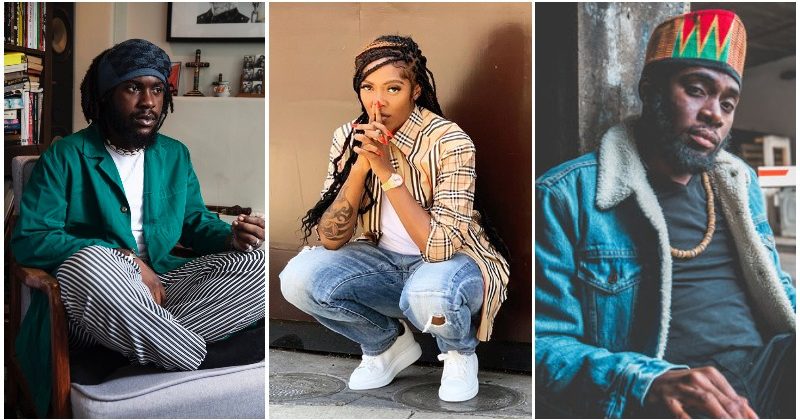 With most of the world self-isolating to flatten the COVID-19 curve, music is one of the things that has kept our spirits up and sustained our sense of community. Artists from all around the world have continued to put out new music, and their relatable subject matters help us process past hurts, dream of a better future, whilst also just enjoying the present moment. It’s completely understandable if this week, you haven’t really been keeping up with new music releases, given the current state of affairs around the whole world.

So to help out a bit, we’ve compiled a list of the new songs you should listen to today. Following our mid-week selections that included drops from Prettyboy D-O, Nana Fofie, Juls and Sango, Efya and more, today’s curation includes Nasty C’s latest single, a collaboration between Kranium and Tiwa Savage, new singles from DJ/Producers, Sun El Musician and Juls, and much more. Enjoy.

Despite the tense banter that followed the flawless NS10v10 victories by Nigerian superstars, Wizkid and Burna Boy, over their dancehall contemporaries, Vybz Kartel and Popcaan, Afropop and Caribbean pop have a strong relationship which has been shown by the steady stream of collaborations between the genres’ respective artists. After featuring Burna on “Hotel” last year, dancehall star, Kranium has just tapped the services of Tiwa Savage for his latest drop, “Gal Policy (Remix)”.

Originally released earlier this year, “Gal Policy” finds Kranium in his trademark lothario bag, as he explains the peaceful dynamic that exists between him and the women he engages with. On the remix, Tiwa Savage plays the love interest who’s a bit slighted by his infidelity, but ultimately knows he remains committed to only her. The remix adds a layer of complexity while also showing off the chemistry between the two artists, over a catchy mid-tempo beat.

Nasty C SZN is here. The South African rapper has been prepping the release of his third studio album, ‘Zulu Man with some Power’, and the last couple of weeks have seen increased activity that suggests the project will be here real soon. A week after dropping the socially concerned, T.I-assisted cut, “They Don’t”, Nasty C is back with “Eazy”, a new single where reverses back into his trademark braggadocio.

Adopting a smooth sing-song flow on the first verse and a sturdy cadence on the second verse, the rapper flexes his wealth and stunts on his adversaries, referencing his rise from the bottom as justification for his unhinged exuberance. “I see you change the way you feel about me when the lights hit my jewellery/It’s a lot of bad things here, I’m right where I should be”, he boasts over the psychedelic riffs and stomping bass.

South African DJ/Producer Sun El Musician broke out with his 2017 smash hit, “Akanmali”, featuring Samthing Soweto, and he’s worked his way into one of the premier purveyors of African house music with subsequent releases. For his second single of the year, “Ubomi Abumanga”, the producer puts together a dreamy banger that will either calm you down or get your body swaying, depending on your disposition. Gliding over Sun El’s thumping percussion, layered piano riffs and horn blasts, South African singer, Msaki adds an ethereal and captivating touch with her melody swells and playful vocal runs.

Later this month, Malian singer, Oumou Sangare will release ‘Acoustic’, an unplugged album with acoustic reworks of her critically acclaimed 2017 LP, ‘Mogoya’. ‘Acoustic’ will strip down the hi-definition tools which accompanied the traditional sounds of ‘Mogoya’, and it will mostly focus on Oumou’s voice with sparse instrumental embellishments. Ahead of the album’s release, the singer has just shared lead single, “Djoukourou (Acoustic)”, an energetic song which places Oumou’s energetic and bright voice alongside spritely plucked, folk strings.

While he’s established himself as the go-to guy of the neo-highlife subgenre, a lot of Juls’ music is a constant exercise in finding new ways to deconstruct and reinvent his chosen sound. “Wata”, his latest release continues to chart his experimental yet identifiable path, as he combines growling bass guitar riffs, afro-folk percussion and horn interjections to create the skeletal groove which pushes the song forward. Vocals on “Wata” are contributed by UK-based reggae singer, Randy Valentine, who delivers a message of positivity through his uplifting lyrics and his vibrant vocal performance.

At the beginning of our social distancing woes, Young T & Bugsey’s “Don’t Rush” became a worldwide phenomenon following one of the most delightful TikTok challenges in recent memory. Looking to extend the song’s impact, the UK duo have just dropped the second remix to the smash hit. Te first one featured Urbano artist, Rauw Alejandro, and this time around, they’ve enlisted DaBaby, who’s song is currently number 1 on the charts. With the same beat and unchanged verses from Young T and Bugsey, DaBaby’s opening verse, where he employs his trademark supersonic flow, is the only new thing on the remix, however, it won’t be surprising to see the remix further the song’s success on the American charts considering.

Earlier this week, Tay Iwar celebrated his birthday with the release of a new loosie single, “Play Nice – Stuck Inside”, a song that mines his ability to sing of the emotional complexities of falling in love. Joined by British R&B singer Zilo, the pair play a dysfunctional couple who find it difficult to be totally vulnerable with each other due to their egos and other personal issues. The song is divided into two halves, allowing us an unfiltered look into both sides of the relationship, with Tay and Zilo matching their evocative writing with affecting vocal deliveries over the exotic mix of Spanish guitars and reverb-stained 808 bass.