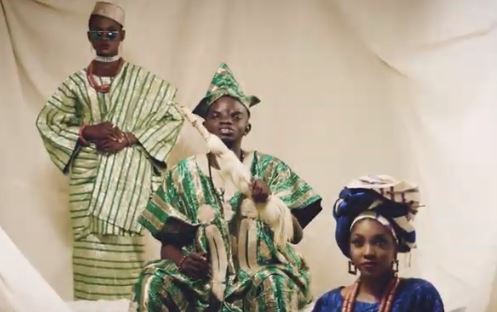 In its first few months of existence, the Mr. Eazi-led Empawa100 initiative has brought the faces of some of the most obscure acts on the continents, to thousands of Afropop fans, even turning artists like Joeboy and J. Derobie into certified hot prospects. Urban Folklore singer Mobelieve is the latest beneficiary of the initiative, featuring on the platform with the music video for the remix of “Bi Oba”, a standout selection off his impressive debut EP from last year, ‘Ariwo Eko’.

Loaded with brags and confident colloquial, delivered in his native Yoruba dialect over Olumba Lo Shey Beat’s slow rolling percussions, the addition of a new verse and outro refreshes the efficacy of Mobelieve’s assertive lyrics plainly stating the implicit nature of his royal status off being a singer. Aptly capturing his rustic vocal performance, the visuals for “Bi Oba (Remix)” leans into a colourful mix of vividly vintage Yoruba dressings, nostalgia-inducing props and a seemingly ancient location. The video contains close-up shots of Mobelieve placidly singing his lyrics, as well as shots of dancers and models exquisitely dressed in beautiful Yoruba regalia.

Watch the video for “Bi Oba (Remix)” below.