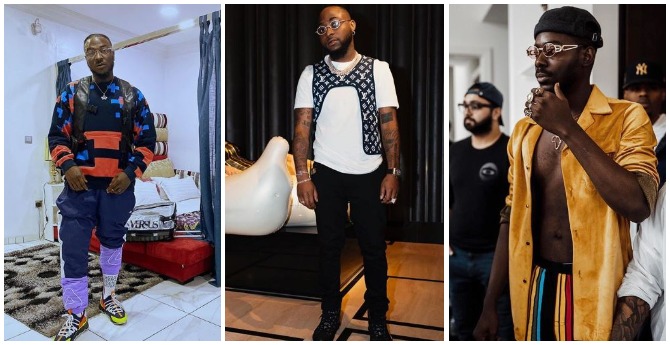 Here’s a list of songwriters enlisted for Davido’s sophomore album, ‘A Good Time’

In 2017, Davido went on a ‘Back to Basics’ campaign, following the lukewarm reception for his crossover attempts with the 2016 major label EP, ‘Son of Mercy’. In this period, Davido refocused his energy on making music that catered to his core Nigerian audience, resulting in a year of absolute domination.

For his criminally underrated 2017 single, “Like Dat”, Davido enlisted Teni the Entertainer’s penmanship, which she excitedly shared on her social media information when she was still on the come up of her own careet. Teni’s announcement of her role in the making of “Like Dat” drew criticisms from some quarters of the public, while others wondered why Davido wasn’t writing his own songs.

Earlier on in the year, Davido had announced on his Twitter account that he has a song on his then upcoming album written by Adekunle Gold. Now that the album is here, we can see that on ‘A Good Time’, Davido has worked with a handful of songwriters who are publicly credited for their contributions from song to song.

While Davido is a credited writer on every song, penning some of them on his own, a majority of the 17-song project features and benefits from outside assists, some of them being well-known names to Nigerian music listeners. So to fully appreciate the communal brilliance of Davido’s new album, we’ve compiled a list of notable songwriters on ‘A Good Time’.

(Note: Artists featured on the track are not included on this list.)

After catching Davido’s ears back in 2017, Yonda got signed to his record label, DMW. In the two years since, new music has been far from steady from the singer, however, his extensive work on his label boss’ new album shows how busy Yonda has been. On the album’s final track, “Animashaun”, Yonda steals the show with his fuji-pop vocals, however it’s his pen that proves invaluable. He’s also credited as a songwriter on two other songs, “Company” and the compelling “Intro”.

Peruzzi joined the DMW ranks in 2017, effectively breaking out last year with his scene stealing verse on 2Baba’s smash hit song, “Amaka”. Apart from releasing his 2018 EP, ‘Heartwork’, and his recently released debut LP, ‘Huncho Vibes’, he’s been described as the serial writer in the DMW camp, and that shows in his contributions on ‘Good Time’. He’s featured on the album’s fourth track, “Distaurbance”, while he is credited as a songwriter on the Popcaan-assited pre-album single, “Risky”.

WurlD became popular with Nigerian audiences after his collaborative single with Shizzi and Major Lazer’s Walshy Fire, “Show You Off”, became a huge hit. 2019 has proven to be his biggest year yet, with the release of two well-received EPs, ‘Love is Contagious’ and ‘I Love Girls With Trobul’ with veteran producer Sarz. Adding to his list of impactful efforts, WurlD’s velvety vocals are featured on NATIVE Best New music selection, “Sweet in the Middle”, while his evocative pen game is credited for co-writing Davido’s summer slapper, “Blow My Mind”, which features American R&B superstar Chris Brown.

Weeks before its release, Davido announced that Adekunle Gold co-wrote a new song on his album. Known for his juju-inspired melodies and folk-indebted writing, Adekunle Gold has worked his way into becoming a prominent afropop act, with special emphasis on his abilities as a performer and songwriter. He’s credited on the second track, “1 Milli”, a love song that merges his blue-eyed outlook of his romantic cuts with Davido’s larger than life persona.

In 2013, Kiddominant broke out via his bouncy production on Orezi’s hit single, “Rihanna”. Since then, the producer has helmed a long list of hit songs for some of the biggest name in afropop, with Davido being a major collaborator. He produced the singer’s 2017 hit single, “Fall”, which became the longest charting Nigerian single on a billboard chart earlier this year. In addition to co-writing, Kiddominant is credited as a songwriter on “D & G” and “One Thing”.

Shaydee became a well-known name after signing a recording deal with the Banky W-led label, Empire Mates Entertainment, back in 2012. He featured on the label’s 2012 compilation project, ‘Empire Mates State of Mind’, released a handful of mildly successful singles, as well as his debut album, ‘Rhythm & Life’, in 2016. Since his album, Shaydee has only released music sparingly, but he’s very much still in the business of making music. On ‘A Good Time’, the singer is credited as a co-writer on “Green Light Riddim”, a flirt-driven, club-ready bop.

Sindiswe Magoso, also known as La Sauce, is a South African R&B singer who broke out in 2017, following the success of a handful of singles. In the same year, she released her debut LP, ‘Broken Lipstick’, collaborating with Davido on the album’s sixth track, “Shine”. Returning the favour on ‘A Good Time’, she’s credited as a co-writer for “D & G”, the sultry cut that features American R&B singer Summer Walker.

Over the course of this year, P2J has become one of the most in-demand producers around, with major production credits including Beyonce’s “Brown Skin Girl”, Burna Boy’s “Anybody” and Doja Cat’s “Addiction”. Adding to his list of credits, P2J produced “Get to You”, the seventh track on Davido’s new album. He’s also credited as one of two co-writers on the song, playing a major role since “Get to You” is the only song on ‘A Good Time’ Davido isn’t credited a songwriter.

Next Article NATIVE Team Picks: The Best Music Videos of the 2010s