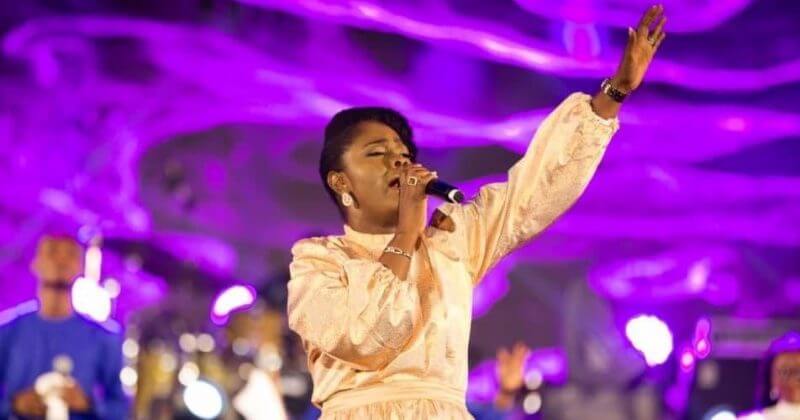 As the Afropop movement takes on the world, topping charts and gaining international accolades, Nigerian gospel is doing the same. Culture Journalist, Ify Obi guides us through the evolution of Nigerian gospel music, from its birth, to its global appeal, and beyond.

A little while ago, a video of DaBaby and his daughter having a father-daughter moment sent Nigerian twitter into a frenzy. As sweet as the video was, what caught everyone’s attention was the song by popular Nigerian gospel music singer, Agatha Moses, playing in the background. Upon hearing that song, as I’m sure it did most Nigerian-bred Twitter folk who watched the clip, a rush of previously locked memories came streaming through my consciousness. I recalled waking up on Saturday mornings to the voices of Tope Alabi or Chioma Jesus knowing that I had a long day of chores ahead, or the funny choreographies we did to Darrell Evans’ “I’m Trading My Sorrow” and Infinity Music Group’s “Olori Oko” while wearing the infamous white lace gloves with socks to match. Gospel music has always been informative in our collective Nigerian socio-cultural experience and will continue to be so, after all, the Nigerian Christian community accounts for the largest Christian population in the continent.

As much as gospel music is a diverse Christian music genre, it is also an intricate part of popular culture. Today, gospel isn’t bound to the walls of the church, though having its roots there – you are every bit as likely to listen to a choral rendition of a song like Midnight Crew’s “Igwe” at church as you are to dance to it at a wedding party. Chances are, you’ve probably already done so. In the face of life’s uncertainties, the feelings of helplessness associated with living in Nigeria, and the ever-present socio-economic hardships, gospel music provides a sense of relief for the average Nigerian; the genre vocalises our longing that one day, these circumstances of life will change. It has never mattered what language the songs are performed in or whether or not we understand them, the message – of love, hope, and faith – is (and always will be) felt deeply.

Gospel music in Nigeria dates back to the 16th century. At this time, the Portuguese catholic missionaries arrived in the ancient Benin kingdom for their evangelical mission, and with their arrival came the introduction of liturgical music. This music was often unaccompanied and contained very limited tunes, so it did not fare well with the people. What would, however, form the basis of what we now know today as Nigerian gospel music began to take form until the 19th century. The coming of the UK based Church Missionary Society (CMS) created wide-spread evangelism across Nigeria and choral music was introduced. Not long after, a Nigerian version was born out of a style and rhythm that was unique to the rich culture of its indigenous listeners, pioneered by Reverend Josiah J. Ransome-Kuti (grand-father of Fela Ransome-Kuti), who, as church organist of the St. Peter Church, Ake, Abeokuta, fused choral music with Yoruba and new rhythmic structures.

A total of 43 tracks were recorded when Reverend Ransome-Kuti was invited to the United Kingdom in 1922 to record an album for his compositions. Some of these recordings became standards, such as “Egbe Awon Angeli”, “Oyigi Yigi Olorun Wa”, “Jesu Oba Alaanu”. Today, Ransome-Kuti is regarded as the father of Nigerian gospel music and is credited as the first Nigerian to record an album. In the same vein, chorister and composer, Ikoli Harcourt-Whyte was the first person to create choral music in Igbo language in the 1930s.

By the ‘50s and ‘60s, the trend of incorporating traditional music forms with choral music quickly grew in popularity and spread wide across Nigeria. Soon enough, traditional instruments began being implemented, and it didn’t stop there. Gospel music artists continued to evolve the genre through the decades – from the folk and country-inspired Karis Band of the University of Nigeria, Nsukka (the ‘70s) to Kris Okotie’s pop-to-gospel conversion (the ‘80s). Then, with the rise of the new generation of American ‘90s gospel stars (Kirk Franklin; The Winans), Nigerian gospel music set itself on a new course. Modelling their music after the American legends, the emergence of Nigerian gospel artists such as Sam Okposo, Tope Alabi, and Broda Martyns, spread the gospel beyond the congregation. From there, Nigerian gospel music gained listenership outside the church and began establishing itself as a crucial part of the Nigerian music industry at large.

Taking on the World

There is clearly a growing space for Nigerian music in the global music market right now. As the Afrobeats movement takes on the world, topping charts and gaining international accolades, Nigerian gospel is doing the same, albeit in its own way.

The global growth of the Afropop movement was mainly reliant on the rise of internet culture, evolution of digital technology, and the age of DSPs such as YouTube, SoundCloud, and Apple Music. Gospel, on the other hand, always had an invaluable edge: the international expansions of Nigerian Pentecostal churches and communities. From The Redeemed Christian Church of God (RCCG) to Mountain of Fire and Miracle Ministry (MFM) many Pentecostal denominations have, over time, established communities in key countries around the world particularly the U.K and the United States. The international leap for Nigerian gospel music was a natural given.

In 2014, former Destiny’s Child member Michelle Williams sampled popular Nigerian praise song “When Jesus Say Yes” on her single “Say Yes” which featured other former Destiny’s Child members, Beyoncé Knowles and Kelly Rowland. Williams’ single was eventually ranked amongst the biggest gospel singles of the past decade by Billboard. Sinach’s 2015 single, “Waymaker”, recently spent 6 weeks at number 1 on Billboard’s Christian Songwriters Chart with over 120 million streams across different streaming platforms in the month of May 2019-2020. This came along after the song was covered by international gospel stars such as Bethel Music, Michael W. Smith, Mandisa, Leeland, Christafari, Mandisa, and Passion Worship Band.

Similarly, fellow Loveworld Records (owned by Christ Embassy Church) artist and contemporary singer-songwriter, Frank Edwards released a joint EP in 2016 with one of gospel music’s most respected figures, Don Moen. “My crossover into the international market started when I collaborated with Grammy-nominated artist Micah Stampley” Frank Edwards explained to me over a text message.

“The church I attend, Christ Embassy, already had a clear global presence, as sermons were broadcast around the world. So when you step on that stage, you minister to a worldwide audience.

We are glad to have received goodwill messages from representatives of the United States and United Kingdom governments at #TE14. #TheExperience14 #LetsworshipJesus

When American gospel music heavyweight, Travis Greene, described The Experience concert as the “largest Christian music concert in the world,” he wasn’t too far from the truth. It might not be marketed as one of the major ‘Detty December’ activities in Lagos but The Experience concert does pack a punch. In 2017, the annual Lagos-held free concert reportedly drew a staggering 700,000 attendees to the historic Tafawa Balewa Square, with millions viewing online across the globe.

Established in 2006 by House On The Rock Cathedral Senior Pastor, Paul Adefarasin, The Experience has, since its inception, given a home to a number of emerging and established artists alike. Coming at a time when there weren’t many platforms dedicated to the growth of gospel artists, The Experience Concert has played a prominent role in the crossover of many local talents into the international gospel market.

“As a result of the vast improvement in quality, several gospel songs now compete favourably with secular music, oftentimes debuting at the number one spot on music charts.

Before now, American gospel songs were the norm in our services. Today, our indigenous songs are favourites in many American Churches.”

Pastor Adefarasin explained during a press conference in the wake of the 2018 edition. He, however, stated “While we do not take all the credit for the growth of the gospel industry, we are proud to say that The Experience has played a very prominent role in this regard. The socio-economic impact of this mammoth occasion is evident and lends credence to scriptures in the Psalms which attest that God blesses and causes the earth to yield its increase to His people whenever He inhabits their praises.”

Now, many local talents compete favourably alongside their international counterparts as they carve their own spaces in the global market.

The year may be 2020, but the Nigerian music industry still remains heavily male-dominated. You can comfortably count on one hand the number of women who are slightly in the reigns and even at that these women rarely receive as much recognition or visibility as male musicians do. However, the same can hardly be said of its gospel sub-genre. Speaking on the cultural impact of the gospel music industry, it is difficult to overlook the influence of its women. I mean if there is any doubt, you can take a look back at the beginning of this story.

In the gospel music industry, women are seen to be the leading figures, and this goes beyond the music, as women often assume positions of authority, for example, Bola Are and Funmi Aragbaye who have both served as National Presidents of the Gospel Musicians’ Association of Nigeria. Not only are these women highly influential, they also enjoy longevity in their careers. We have all been listening to songs by Tope Alabi and Chioma Jesus for most of our lives, yet, they are still very much present in the industry and show no signs of slowing down. They presently co-exist and reign supreme alongside the likes of newer names like Mercy Chinwo, Sinach, Nikki Laoye, Ada Ehi, and an even newer crop of gospel artists diversifying the landscape.

“For too long, Nigerians have put gospel music in a box creatively. They believe if it doesn’t sound like Nathaniel Bassey, Tim Godfrey, or Mercy Chinwo then it isn’t spiritual”

So believes Timi Kei, a young artist whose music blends soul and rap with spiritual lyrics.

Like a newly-formed butterfly finding its way out of the cocoon, gospel music in Nigeria is steadily breaking free of traditional stylistic limitations and is soaring to new heights. Today, its leading artists incorporate the forms of other popular music genres like pop, jazz, rock, r&b, rap, and even afropop in their music; though not without a few criticisms. Purists are of the opinion that the gospel community is conforming to the ideals of secularism in order to appeal to larger audiences for financial gain.

“This is one of the reasons I decided to refer to myself as a Christian who makes music as opposed to a gospel artist. I strongly believe there is nothing wrong with a gospel artist adopting any secular music style as long as the message is being passed to a broader audience,”

Regardless of such criticisms, the contemporary gospel community continues to hold its place, and to the Glory of God, it shan’t be backing down.

Ify talks and writes about culture all day. Tweet her your hot takes @IfyObi_

ICYMI: THE ART OF USING MUSIC AS A FORM OF PRAYER

Next Article Watch the uplifting video of Nissi’s “Ignite”