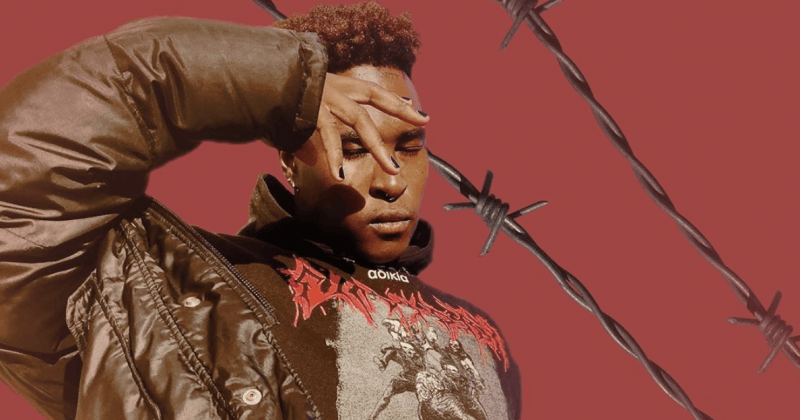 PatricKxxLee has made no secret of his emo influences. With multiple face tattoos, piercings, black painted nails, dyed hair and choker chains, the South African rapper wears his angsty attitude proudly. Though he might seem like any other SoundCloud rapper who shares similar wardrobe choices, PatricKxxLee has always stood out for his earnest reflections. Where it’s typical for rappers to spend the bulk of their time bragging about their money and affluence, he spends his time dismantling his demons and blurring genre lines between hip-hop and punk-rock.

Today I dropped my 3rd album #ETERNITY & fam y’all have really made my year today 💜4real I love you !! Super thanks to @nufacechicago @adamtiran for making this possible 🚀 & S/o @applemusic @tidal @spotify for the crazy support ⚡️ #lostfamily comment your favorite song 🪐

He just shared his 3rd album, ‘Eternity’, the follow-up to 2018’s ‘Nowhere Child’ and he’s picking up right where he left off on his dark path to salvation through music. With no features on the 17-track offering, PatricKxxLee can indulge in all his emo punk extremities, exploring the darkest corners of his thoughts over moshpit-inducing beats he self-produced. He delivers tracks referencing the horror video game, “Silent Hills”, “Lost Boy Anthem”, a vampire romance-themed track, “Fangz” and even encouraging listeners to “Join (His) Cult”.

Although PatricKxxLee’s charismatic personality has allowed him build a fanbase that matches his intensity and need to rage, emo rap is still seen as the outlier among hip-hop heads. However, on one of the standout tracks from ‘Eternity’, “God Don’t Make Mistakes”, PatricKxxLee highlights hip-hop and punk rock’s symbiotic relationship as tools for protesting against the system. His rage inciting mix of bass guitar riffs, eerie synth samples and hi hats serve as the perfect backdrop for him to deliver commentary on the systematic oppression of free-thinking youth by conservative societies and religion.

“Might as well kill me now because I will not fear the system/ This is a horror movie/ they kill anyone who film it”, he says with the swagger of a gangster rapper. His lyrics paint institutionalised religion as an evil machine that brainwashes people and robs them of their purpose and voice. And although some of his rants become mythical with lines like “The universe is female/The species that inhabit mars is indeed male”, he remains grounded in the truth he preaches against the system and makes compelling points like “Toxic masculinity goes hand in hand with Christain pride”.

PatricKxxLee’s “God’s Don’t Make Mistakes” shows that there’s never a bad time to protest against injustice when we see it. Using Christianity as the anchor for his cry against institutionalised subjugation, the song encourages listeners to be more politically and socially literate, or “woke” so they don’t fall for whatever lies their authority figures say.

ICYMI: Catch up on all the essentials from PatricKxxLee’s last album ‘Nowhere Child’

Next Article The evolution of gospel music in Nigeria