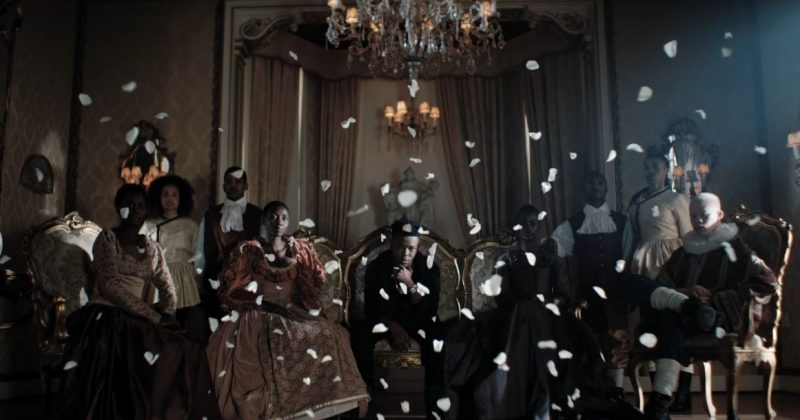 The cinematic longform music video has been a thing since musicians started making concept albums. Music inspires grand mental images and there hasn’t been a musician who hasn’t been tempted to translate their carefully engineered soundscapes into a visual narrative, stringing songs that would otherwise be appraised individually into a cohesive whole.

Artists like Drake (Views), Kanye West (My Beautiful Dark Twisted Fantasy) and Skepta (Konnichiwa) have put out short films for their personal projects. Big Sean and Jhene Aiko’s incarnation as duo Twenty88 was an entire concept album built around a long-form music video that presents them as an afrofuturist robot couple controlled by an oppressive corporation. With Beyonce’s fifth album Lemonade we saw the genre form build upon the grandiose imagery delivered on Kanye’s magnum opus, and really grow to be a personal medium for artists of colour, a way for them to approach storytelling and convey messages that might otherwise be lost in translation. However, until now we haven’t seen an African artist embrace the form.

This isn’t much of a surprise, given that the African market is largely governed by singles and remixes, with LPs seen by artists and their labels as formalities rather than passion projects, due to the difficulty to effectively sell albums in the motherland. Despite this, albums are still the best way to get your message across to listeners, and by extension, everything that comes with an album only aides this. Be it; interviews, television appearances, or say, a short film; the medium of the infamous “album” is unrivalled in freedom of expression. Enter: Nasty C.

Durban-born rapper Nasty-C is a the true scion of the kind of trap music, drawn from multicultural influences and popularized by Canadian rapper Drake. Nasty-C’s age (he’s 20) and the critical acclaim he’s garnered in his career has put him at the forefront of South African pop music and made him an alternative sex symbol. He is the perfect crossover artist, contemporary enough that young African see themselves in him but with the lyrical prowess and wordplay to demand respect from industry gatekeepers, especially an endorsement by Cassper Nyovest, South Africa’s biggest contemporary pop export.

His debut album Bad Hair released in September 2016 and the deluxe EP Bad Hair Extensions released in December 2016 has proven that he is more than an internet sensation. Instead of promoting the album’s singles through the conventional route of individuated music videos, Mabala Noise chosen instead to splurge on a long-form short film .

Bad Hair (aliased Veliswa) according to Daily Times ZA is an homage to the artist’s mother and premiered in theatres across South Africa on the 9th of March, a major coup for the artist.

Nasty-C directs and stars in the Veliswa, the first sign that the film would have kinks, considering the rapper has no professional experience as in filmmaking or as a scriptwriter. The choice of songs given the film treatment, “Don’t Do It”, “Good Girls and Snapchat Hoes”, and “Phases”, from the Bad Hair Extensions album seem in complete contradiction for a film dedicated to Nasty-C’s mother who died when he was an infant.

Visually however, Veliswa is a delight. By embracing the millennial obsession with classical inspiration spliced with modern narratives as evinced by platforms like Tumblr play heavily in the imagery of the film. Superior cinematography even for South Africa’s global standards keep you glued to the screen, afraid that even a second’s distraction will cause to miss some carefully curated image. The first act for “Don’t Do It” draws on South Africa’s colonial history, featuring the most beautiful colonial victorian manor and an albino jester in a ruched collar and models including Rwanda’s Happy J. Umurerwa in brightly coloured victorian gowns, posed where the white ladies would have been. The subversion of this imagery, which often features in black cinema puts Nasty-C in place of the lord, instead of out in the cotton fields. For any other song, this would be a powerful image.

This theme of the music completely contradicting the visual imagery continues through the rest of the film, the second act for “Good Girls and Snapchat Hoes” featuring ’empowered’ alternative women dress in altheisure wear, dancing in a beautifully lit communal bathroom, showing off and mouthing Nasty-C’s lyrics. But the lyrics themselves, which is four minutes of par the course slut shaming of ‘rap groupies’ is too jarring to ignore.

The closest Nasty-C comes to cohesion is on phases, which sees him rap to his music in a columned hall while a ballet major and athletic men in a variety of mask leap ecstatically into the air. It is much easier to imprint meaning into the abstraction that happens in the video. Nasty-C is at his best as a director when he is most stripped down.

At the end of the 14 minutes of Veliswa, you come to a few epiphanies; this is arguably the most beautiful long-form music video you have out of Africa by an African. the visuals for “Don’t Do It” might actually be the most beautiful music video out of Africa by an African. But like Tumblr, it is a collage of really pretty images that leaves you overwhelmed but fundamentally unchanged, unhinged, unmoved.