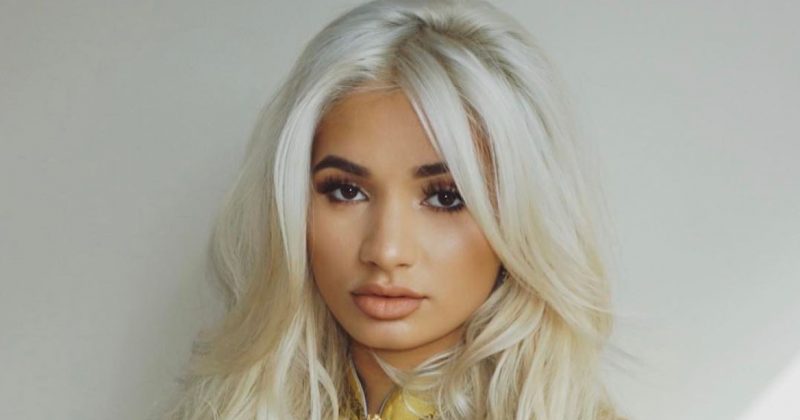 The internet, like other handy inventions of men has a dark flip side. Just as we’ve seen people get dragged days after hitting thousands of RTs and LOLs, Pia Mia appears next in line for a humble pie serving. For those who don’t know her (we don’t blame you), Pia Mia is a Kardashian-Jenner affiliate who famously shot to faux-stardom after singing a rendition of “Hold On, We’re Going Home” to Drake himself at a Kardashian-Jenner family function. She followed that up with a semi-successful single titled “Let’s Do It” featuring Tyga and Chris Brown (more on that later). And now here she is, mixed up in some drama with Enugu’s finest.

The latest single from the internet sensation turned pop star, “I’m A Fan” is just one melody too similar to Phyno’s track with the same title. A deep cut from Phyno’s widely underappreciated The Playmaker album from last year, “I’m A Fan” was first released featuring Decarlo and Mr Eazi with, with the now played out afro-caribbean influences on the production. Pia Mia took that beat (albeit chopped and screwed) and got Jeremih to feature on the single expected to be on her debut album due later this year via Wolfpack/Interscope Records.

Let’s not beat around the bush: the similarities between Phyno’s “I’m A Fan” and Pia Mia’s are uncanny. Other than the slightly pitched down beat on Pia Mia’s, ‘produced’ by Hitmaka fka Yung Berg (!!), it is almost verbatim the same song in the first verse and choruses. It’s almost a surprise that she didn’t just go all the way and parrot Phyno’s bars in Igbo.

In the past, we have seen two near identical songs surface in the same time frame, but there’s usually some sort of explanation. We have seen reference tracks (i.e. a demo version of the song made by a songwriter for the artist) such as Future’s “Good Morning” released shortly after Beyonce’s “Drunk In Love”. We have also seen covers of songs/remixes released almost immediately after the release of the original, such as every Conor Maynard song ever. So it’s not unheard of what we’ve seen here, but it’s definitely not without explanation.

Here are four possible reasons for the existence of Pia Mia’s “I’m a Fan”:

This is the most obvious explanation, due to the fact that the songs are almost identical, and it wouldn’t be the first time this has happened. Usually samples are simply when a section of a song is interpolated in the new song, as seen when Legendury Beatz sampled Dr. Dre and Snoop Dogg’s “Nothing But a G Thang” to produce Wizkid’s “Ojuelegba”. However, the term sampling can also be used in more blatant instances. The title track off Drake’s Take Care album for instance was first sung and produced by Gil Scott-Heron and Jamie xx respectively, but Drake owns full rights to this song. It’s easy to imagine that Pia Mia heard Phyno’s “I’m A Fan”, became a fan (of the sound at least) and recorded her version whilst paying Phyno handsomely enough to get away with the chunk she bit off him. The only problem with this is that as seen in Drake’s situation, Jamie xx worked on the song and along with the late Gil Scott-Heron, was credited deservedly. On Pia Mia’s “I’m a Fan”, the only credited composers – via iTunes – are: Christian “Hitmaka” Ward, Pia Mia, Jeremy “Jeremih” Felton & Samuel David Jimenez (aka Smash David). There is no mention of a certain Chibuzor Nelson Azubuike, aka Phyno, or the producer of the his version of the song, Benjamz.

This seems to be the fan-nominated answer to the mess on social media, as listeners deemed it the only logical explanation due to the songs being practically the same. Whilst selling someone a song that has already been released to the public for purchase is extremely uncommon, it is not unheard of. Davido’s hit single “Gobe” was originally released by a Nigerian producer/songwriter named Password in 2011. Two years later, he took the song to Davido’s longtime producer Shizzi and the rest is history. Till this day it remains one of Davido’s biggest hits, and Password was paid handsomely (according to Davido’s former manager). This seems possible, but it is also hard to believe as Phyno is not exactly a struggling upcoming songwriter (no shade to Password). He is a seasoned rap star, with one of the best fanbases in Africa. Whilst most of the mainstream audience had never heard Password’s original “Gobe”, Pia Mia surely did not think that she could release her version of “I’m a Fan” without any of Phyno’s listeners hearing it. Her Youtube and Instagram comments since the discovery has gone viral will support that. They are appealing to different markets in the grand scheme of things, but with African Pop Music crossing over like never before, Pia Mia really played herself if she bought this song thinking no one would know. (Ed. Note: If this reason turns out to be the true explanation, this may go down as the biggest finesse of all time by Phyno. Ever).

Pia Mia Tried To Pull A Fast One, Again

Basically, Pia Mia doesn’t care and thinks we’re all dickheads. Look, we don’t know the girl and she seems sweet, but she has previous history in this “song-stealing” game. In 2015, Pia Mia released a single featuring Tyga and Chris Brown titled “Do It Again”. It’s her best performing single till date, peaking at no.71 on Billboard’s Hot 100, and no.8 on the Official Singles Chart in the UK, on the way to going platinum in both countries. However, large sections of the song are almost identical to Hawaiian reggae artist J Boog’s “Let’s Do It Again”, released in 2010. Pia Mia first recorded a “cover” of J Boog’s reggae track as a tribute to him, before Chris Brown and Tyga allegedly heard the song and asked to be on it. In 2015 it was repackaged as a song by Pia Mia featuring Chris Brown and Tyga. Similar to the local popularity of Phyno’s “I’m A Fan”, J Boog’s “Let’s Do It Again” was a dancefloor staple on the islands, leading many to accuse Pia Mia of stealing his song. However, crucially dissimilar to Phyno’s situation, J Boog is credited as being a songwriter on Pia Mia’s version, and has himself come out to say it was not “stolen”. Whether this accreditation happened before she was confronted by angry listeners or after is unclear, but at least J Boog is eating off the song till this day.

I mean Dancehall inspired production and melodies are super in right now. Maybe….nvm. This is the least likely of all explanations. This is impossible.

We’ve reached out to representatives of Pia Mia’s team and Phyno’s team, but they were not immediately available for comment as of publishing time.

Listen to the two versions below to see what the fuss is all about.

Watch Phyno’s “Link Up” video featuring Burna Boy, MI and everything you’ll expect to see at a riot