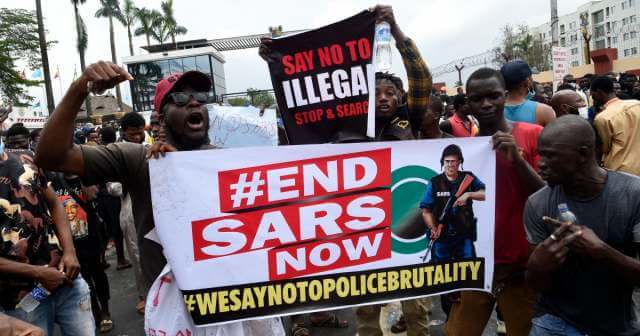 #EndSARS: Alausa Protests are currently being disrupted by armed thugs

If you’re in or headed to Alausa, please be at alert and stay safe

In the week since the #EndSARS protests have erupted all over the country, Alausa has quickly emerged as one of the focal points of the demonstrations. Due to its strategic position in Ikeja, Lagos’ capital city, as the physical location of the governor’s office, the Lagos state house of assembly and several state secretarial headquarters, protesters have converged in the area on a daily basis, stunting movement and curtailing the regular flow of business in a bid to ensure that our voices are heard.

Earlier today, protesters began to assemble at Alausa as usual, however their gathering is currently being disrupted by armed thugs. In the last hour, protesters on ground have been sending in social media posts describing happenings in and around the area. According to videos, written tweets and oral accounts, thugs armed with cutlasses were carried into the area in several of the Lagos state-initiated trademark blue buses (LAGbus), and they’ve set about chasing, terrifying and injuring protesters.

Conspiracies are already floating around as to the powers behind these thugs, with many claiming that they could very well be state-sponsored. This is coming on the heels of yesterday’s protests in Alausa, which was beseeched by armed thugs in the afternoon, but were repelled in self-defence and captured by protesters. Also, yesterday saw an attack on protesters in Berger, Abuja by armed thugs who destroyed cars, properties and wounded several, before they were rounded up by protesters who fought back. Per Sahara reporters, the Berger, Abuja attackers were allegedly contracted the chairman of the Jabi Motor Park, Nasiru Bude, however, it is unclear if these attacks were truly sponsored.

If you’re in or headed to Alausa, please be at alert and stay safe. This is a developing story and we will be delivering updates as we find out more.

ALAUSA IS UNDER ATTACK BY THUGS! Protesters are under attack ! Send help ASAP!

Some Protesters came in with 4 yellow Buses. They chased them back with weapons. @jidesanwoolu You have declared War! #EndSARS pic.twitter.com/trPE7WvG8W

Sanwo Olu just declared war!
I'm at Alausa now..They are attacking passersby that look like Protester. They are at the pedestrian bridge by Alausa express, in front of Alausa Police station and inside the secreatiat. They would beat u and hand u over to d police, yes! Police.

IMPORTANT: THE KEY ROLE WOMEN HAVE PLAYED IN THE FIGHT TO #ENDSARS