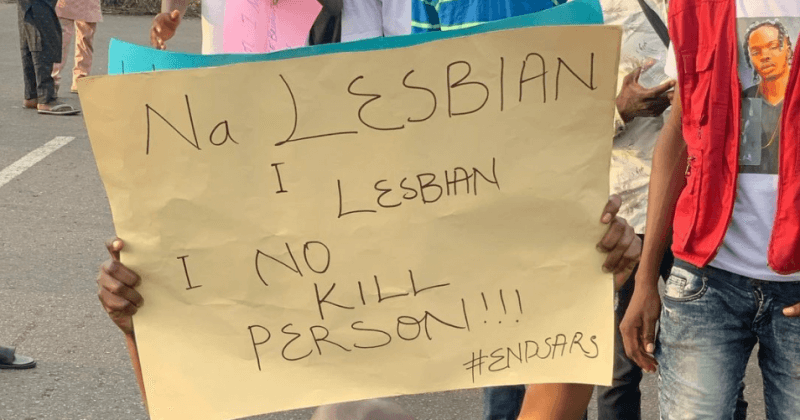 For Us By Us: Queer Lives Matter as we all fight to #EndSars

Throughout the #ENDSARS protests, the NATIVE will be collecting stories and opinions of Nigerians from all walks of life, from all over the world with the aim to connect our wider community at this trying time. With our new series, ‘For Us By Us’, we will be hearing directly from each other, speaking about the different issues we are all facing and tackling together, in the aim for a better future for ourselves and the next generation.

For years, decades even, Nigeria has been on this rollercoaster ride of deterioration and dereliction. Our parents used to tell us stories of a gorgeous black nation, where anyone with a dream, could be a titan. They told us great big stories, one of which, painted a picture of how we built an entire city for an arts festival. They regale tales of how we were held in high esteem all over the world. Brands and companies known the world over flocked here and found a safe haven. People were joyous, money was not
an issue, and life was incredibly forthright with jubilations to come. The most populous black nation on earth. Apparently, we had our own moment.

Scientists and psychologists always say that the human memory is one that should never thoroughly be relied on. Nostalgia provides catharsis in moments of crisis but is a dangerous drug around which to build an existence. They forgot to tell us about the dark days. The dark days that oddly and almost prophetically, coincided with the birth of this generation. For 60 years Nigeria has been taking 10 steps forward and 40 steps back. We have leaders who continue to treat the country like their own personal trust fund. They feel they owe us no communications, no accountability, no transparency. We are beneficiaries of this trust, and very few of us can honestly say we have benefited.

Our currency has been heavily devalued, even without the actual action. Inflation is at an all-time high. Our youth cannot even find jobs to help keep them alive. On top of this, the forces that are supposed to be protecting us, are killing us. For having the audacity to live, to express ourselves, to thrive, to live and love how and who we want. To say that the LBTQ+ community in Nigeria have been unaccounted victims of the same brutality under the Special Anti-Robbery Squad (SARS) is the biggest understatement of the past decade. For years, queer men, women and individuals beyond the binary, have been attacked, raped, extorted, harassed AND murdered because of profiles that the previous generation have taught the nation to attack and hate. For being different. Nobody wants to be ostracized. We didn’t choose this. It chose us.

Our communal fight to #EndSARS is inclusive of the LGBGTQ+ community who are also harassed, assaulted and killed by police. They deserve the same justice we seek & even more so, as they are also a target of the law. You can’t be what you fight against! #QueerNigerianlivesmatter

I would be lying to say that I have experienced the same kind of treatment that a lot of the members of my community face when it comes to police brutality. I however will not try to hide behind any privilege that I may have and say that because it couldn’t happen to me, it would not be an injustice. We have been fighting for the past 6 days. In that time the government has shown no regard for us. They have killed us. Despite the fact that we didn’t bear any arms. There have been no reports of vandalism. Our protests have been peaceful. Yet they have murdered people and illegally detained many others. We have fought for their release. We showed up for each other. No one knows which way this is going to go just yet. It is in equal parts terrifying and exhilarating.

However, we know now more than ever what we want. A lot of us have no idea if we’ll be dead tomorrow. But one thing remains true about our generation. We have proven, time and time again, that there is WAY more that connects us, than there is that divides us. To the ones that have fallen in our quest for a world that should have shown up for them, for as long as we sweat and fight, we are singing your names to the heavens. We remember you. May your journey on the other side be peaceful. We will continue to fight to ENSURE that we thrive in a world that we did not make.

ICYMI: The LGBT community are not left out of the fight against systematic opression

Next Article #EndSARS: Inside the sinister operations of Akwuzu SARS in Anambra State