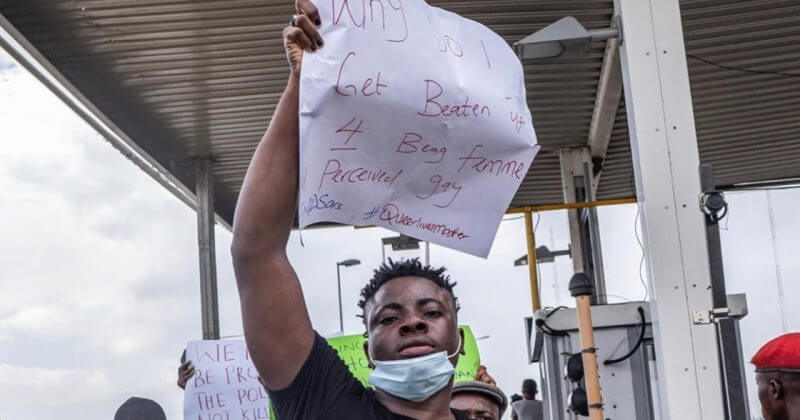 On the 10th of July, a queer femme, LGBTQ+ rights activist Matthew Blaise was out on the streets of Lagos when they was accosted by the police on suspicion of ‘perceived homosexuality’. During their one hour detainment in police custody, they were verbally and physically assaulted by their captors who justified this discrimination by referring to God and Christianity, a feat that commonly occurs in the country’s deeply homophobic climate.

Barely two weeks later, they were arrested again. This time around, for looking ‘like a lesbian’ after which they were driven to an unknown location and asked to unlock their phone for the suspecting officers. But when Matthew Blaise began reciting their right to not be searched without an official warrant, they were only released to go home after further haggling by the police. Their story is not uncommon in Nigeria today, as many young men and women are arrested, detained, and tortured every day by the brutish police on account of their sexuality and their dressing.

I said I wasn’t going to come back to twitter because I’m going through a lot rn but apparently, the worse happened today. I was arrested by the police for being ‘perceived’ gay.

Fam, they all yelled at me. Dragging my ears and my hair. Preached to me. pic.twitter.com/SO4sdyUKtX

Today, many of the LGBTQIA+ community live in constant fear of being openly out, particularly as the Same-Sex Marriage Prohibition Act (SSMPA) criminalises homosexuality and enshrines a culture of homophobia deeply into societies fabric. From homes to churches and schools, we’re constantly told that the Nigerian society has no place for queer existence, constantly othering the lives and experiences of members of our society and denying them access to basic human rights because of their sexuality.

Matthew’s story is one of the many instances where queer Nigerians are assaulted, attacked, and harmed by the Nigerian police who deliberately seek out young adults who they ‘perceive as gay’. By engaging in this callous exercise, the police force, and their anti-robbery unity, SARS became yet another tool of oppression to further propel rampant homophobia and violence. Law enforcement here has long since tracked and accosted young adults who had coloured hair or locs, had a proclivity for androgynous fashion, adorned with tattoos, or those who are ostensibly effeminate in their outward demeanour.

So, over the weekend, when queer activists and allies took to social media and the protest grounds to champion the marginalised voices of the LGBTQIA+ community in the heat of the anti-SARS protests and were met with heavy resistance by cis-heterosexual Nigerians, we were once again reminded that the lives of many members of our society were threatened not only by the common enemy but also by those who they chanted with and marched alongside in the protests. Like many marginalised groups in society, the queer community is besieged with two battles, the fight against police brutality and the fight against homophobia and transphobia in a country that largely disagrees with our very existence.

Since queer activists took a loud stance of their existence on social media, they have been at the receiving end of threats of violence, insults, and cruel jokes and slander aimed at discrediting their inclusion to the ongoing fight against police brutality and the ineptness of our elected government leaders. These attitudes are not new to any queer Nigerian with a social media account as they fit into the pattern of abuse that openly out users endlessly face online and in real life. Conversations around the backlash centred on wrong timing for the ‘queer agenda’ because we were all fighting one common enemy, the law enforcement bodies and politicians, but they could not have been more wrong.

Police brutality and systemic oppressive structures has never excluded queer lives, in fact, the lives of the LGBTQIA+ community and those of women, another marginalised group in our society, are at the forefront of our collective fight against these systems. Those complicit with oppression on account of homophobia cannot claim to be against the oppression of the people on a wider scale because it is biased, reductive, and exclusionary. Although men would like to believe that they are the main victims of the inhumane treatment from SARS officials, gay men and women are prone to attacks and violence from the hands of this same body due to where they sit at the intersection of gender and sexuality. Oppressive structures are maintained by the erasure and intentional neglect of members of our community who are disregarded and marginalized and as Angela Davis once said, when movements centre Black women (and in this case men), both cis and trans, justice for all becomes not only a conceptual option but a reality.

What is often the case, is that the majority – in this instance, straight-identifying individuals, believe that discriminatory structures only matter when it affects them personally, disregarding the fact that their own hatred for queer lives is actually part of the long-standing culture that propagates further oppression in society. “I’m NOT going to ignore misogyny and queerphobia in the name of fighting a common enemy. If you think your life is the only one worth protecting, you’re part of the problem #SARSMUSTEND” tweeted queer journalist, Daniel Orubo yesterday, and his comment typifies the attitudes that many of the younger queer Nigerians are currently feeling towards the exclusionary nature of the protests.

As momentum continues to rise surrounding the protests across the country, more and more people are using the hashtag #QueerLivesMatter to remind us that queer lives cannot be erased from this period in our history books. And with Gen Z and millennials finding their voices and using it as their greatest tool against oppression, we can see the workings of the current movement becoming more intersectional. But the fight against exclusion is far from over, currently, the general attitude is that queer activists and allies are forcing queerness on Nigerians who are not naturally gay but yet every day, the visibility of open out members of the queer community shows us that our lives and experiences matter and our humanity is never up for debate.

Although it is not up to members of the LGBTQI+ community alone to educate people on their lived experiences, our constant disregard to be silenced and the audacious visibility we take up on social media and on the protest grounds characterises the current social attitudes to not relent on our rights and to make our country a safer place for all marginalised groups, including queer people. But the first step to curbing the mass spread internalised homophobia would be by focusing on policy reform of the SSMPA. In the meantime, we keep chanting #QueerLivesMatter.

Next Article The Nigerian police respond to #EndSARS protests with brutality