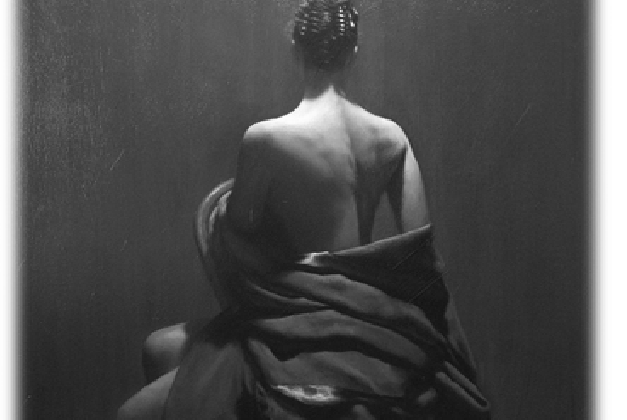 We took Tay Iwar’s ‘Renascentia’ and turned it into fanfiction

The doors to the bathhouse were closed but not to the woman in the heavy robe. The guards at the heavy marble doors strained and opened them wide to let her pass. The woman glided through as she whispered her thanks to them.

The night air followed the woman into the long passage. On the wall hung lit lamps suspended from ornate brackets. Each of them winked as she walked past. Perhaps they knew of her mission, perhaps they didn’t. Her destination was at the end of the passage, guarded by others just like the ones outside. Steadily and without breaking stride, she made her way there.

When she was a few paces away from the doors, they opened up to let her in. She went in and the doors shut with a finality, which sent a shudder through her. Anticipation and fear were her fellows in this late hour as she took in the sanctum where they came to hide.

Moonlight from an uncovered skylight lit the length and breadth of the pool. The corners of the room were in shadow but that did little to hide the sparkling and twinkling of the walls as light bounced from the pool to the walls. There were no lit lamps here. Only her, the moon and them.

They were silent but she knew he was watching her. She had heard of his looks, sharp and eagle eyed. But this didn’t feel like it was one of those. This was a caress on her skin. Something soft yet hard. It was a heated gaze. She could tell where it was coming from but she chose instead to look at the rippling water in the pool.

Take your shoes off, Atusa.

Her first instinct was to rebel against this disembodied voice in the darkness but she thought it unwise. She obeyed. Slowly, she slipped off her soft slippers and pushed them to the side.

Atusa. Her name rolled off his tongue like the water. No doubt, he had spent the day taking in the feel of it, the name of his bride. It had only been a week since she found herself in his presence and still she was as new to him as the dawn each morning.

Can you be free, Atusa? Can you?

Her heart was a drum in her chest. Her lips were sealed. Answers came to her tongue but none could come forth. They were patient with her because he understood her hesitation. The queen was a stranger to his ways.

Answer me, Atusa. Can you be free?

Show me, Atusa. Show me that you can be free.

The order had been given and disobedience was not an option. Yet, she stalled. Hesitation had set it.

Why don’t you trust me? I won’t leave you alone, Atusa. Trust me.

The water was calling her name as he wove his words around her. Calm closed in and she obeyed.

She disrobed. Slowly, each clasp came off to reveal smooth pampered skin beneath. Another caressing gaze and she blushed under the cold bleached moon. Her next steps took her to the edge of the pool where she met stairs carved into the side. Her descent began.

‘Ask whatever it is you want of me, my lord.’

She could feel the cold water pressing against her legs as she made her way to the center of the pool.

She was chest deep now. Her hair was partially submerged in the swirling water. She could tell that she was floating.

Close your eyes, let it take you. Don’t run from it.

In her mind, long forgotten connections came to the surface. They were him and together, they were us; she and him. The dark had embraced her fully.

Do you know who I am, Atusa?

From somewhere within, she answered. No, she did not know. Her lord should forgive her ignorance and grant her this knowledge. She was beginning to fall but in a pleasant way. The water was a sinking bed. She had her doubts but to silence them, she struggled.

Calm, Atusa. I am Calm. I am crystal blue persuasion. I feed on your desolation. I am paradise.

Her mind swallowed his words greedily. She could feel it working in her as her muscles relaxed to embrace her coming death. She had willingly let herself drown in him.

Don’t try to fight it, Atusa. Possibilities are always in the distance. You’ve got to reach out for it. Trust me, Atusa.

She did and it was her judgement.

It was a slow chant, which cradled her as the water carried her to the place where life ceases to have meaning. Her body stilled. It was over.

In the morning, I’ll be gone. Sleep well, Atusa.

They walked out of the room, leaving the woman in the water.

In the morning, as the sun climbed to its peak, she arose from the water.

Saving the New Age from the sins of its predecessors

0000
Previous Article What does the ‘Streets’ really mean to its firebrands in the face of Injustice?

Next Article 16 unique songs that have defined modern Nigerian weddings