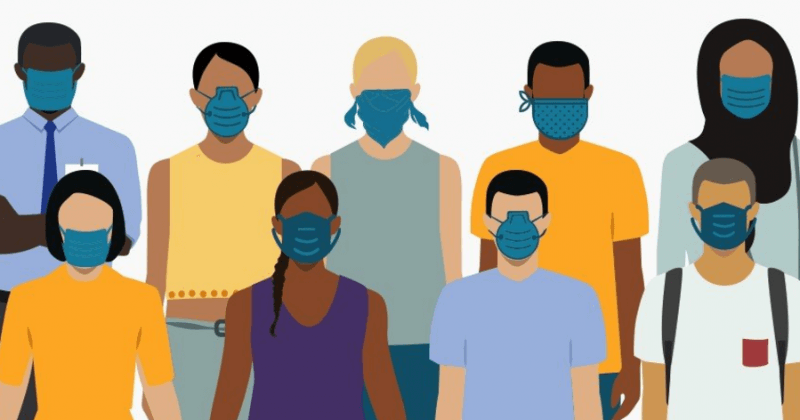 In nightclubs and party venues around the world, once crowded dance floors have remained empty and venues have remained shut in light of the ongoing global health crisis. With five months already into the socially-distanced new normal, tensions are building up around the world as we’re all starting to feel the pressures of staying home without any human interaction.

Talking to the homies online is all good, but seeing them in person is even better, and so whether advisable or not, we can’t gloss over the fact that some people are beginning to plan parties and weddings during these unprecedented times. And while such escapism may be a chance to blow off some steam after extended worldwide lockdowns due to the coronavirus pandemic, it also raises safety concerns about how to party while also respecting new social distancing measures.

Partying during the pandemic would have gotten you a raised eyebrows and unfriendly messages a few months ago (Funke Akindele even got hit with a fine for her birthday bash), but now more and more people are hosting pandemic parties and seeing close friends and family if they need to. However, the truth still remains that the consequences of the actions we take are still potentially life-threatening, so more important than ever before. Despite this, it’s hard to convince anyone to keep staying indoors when everyone’s beginning to feel the effects on their mental health. I, for one, have been out for a party during these times and have had my anxiety peak while attending a small get-together at a friend’s house.

From the numerous Sallah parties that were held over last weekend, it’s becoming apparent that, with the lockdowns being relaxed across different countries around the world, many people have begun to ease back into their regular schedules, grabbing meals at restaurants, attending private baby showers, and even in some extreme cases, going to nightclubs. Here’s how members of our community are getting up to no good amidst a pandemic.

I was scared and anxious because, at the party, everyone was acting like there was no COVID. Everyone went about their businesses without masks or hand sanitisers. I wore my mask but pulled it off later. I kept sanitising my hands but it felt so weird. And like 2 people offered to shake my hand. It was scary.

On another occasion, I went to see my grandpa and I didn’t even sit because I was scared I might have contracted COVID-19 at the hangout earlier. I just kept a distance in his house. I didn’t want to give him the virus.

The first event I went to during the pandemic was in May and it was a friends birthday. It was a bit nerve-racking to be among so many people during such an uncertain period. I took precautions, as did others with me. Strangely, people weren’t practicing social distancing there. We were all so happy to finally reunite after being away for so long! I was a bit shy too and everything sort of felt unreal, at that moment I had to value social interaction a bit more and also valued myself a bit more too.

Life-altering events can really show you how much you miss people or how much you’re good without them. Over time life started to feel normal again from these little hangouts and the thought of catching the virus did cross my mind, I also felt like “what the heck”, we’ve all been in isolation.

I’ve hung out with my friend a couple of times. The first was a very small birthday (we were about 7 in total), that made me a little anxious considering the fact that nobody wore a mask. I almost didn’t go but I had my birthday earlier in the year & he traveled for it so I said okay let me just go. The other times we hung out, I wasn’t anxious because I knew we were both taking the virus seriously and taking the necessary precautions to avoid contracting it.

I went to an illegal warehouse party. It was relatively normal but there was this element of corona is inside throughout as no one wore masks. If I go out again I’ll be sure to social distance as the anxiety the next day was not worth it.

Tbh, I haven’t gone out much. Even pre-corona I was always at home (because of laziness). However, the few times I’ve gone out I’ve still had it at the back of my mind that we’re still in the middle of a pandemic and sometimes that takes out the fun. I don’t really want to be out with friends and still be paranoid. I had a birthday picnic last month and I was so close to cancelling because of all the health procedures involved and social distancing but my friends still insisted – and we had a good time.

I haven’t gone for any house parties …(yet). I missed one last month because I was with my aunt and she’s a high-risk person so I just thought not to put everyone at home at risk. I might try to start going out a little more, and still wear my mask, have my hand sanitisers in my fanny pack and just be careful … because at this point what can we really do.

I’ve been to about 20 different motives since the lockdown ease. It sounds really careless but I was never paranoid at any time. But at some of these motives, I’ll see some people stylishly isolating themselves from the rest of the crowd or people avoiding sharing blunts.

Don’t let Lagos people fool you, they’re all partying and without masks and I can’t blame them when the numbers aren’t making sense anymore. 11k discharged patients in one day, it’s now looking like cap.

I have gone out to a few things, but even while I’m there, I’m anxious the whole time and it makes me super detached from the people I’m around. After every major hangout though, I self isolate for two weeks or sometimes just a week, to see if I feel any changes to my body. So far nothing so we move.

Yeah, there was a period of time I was going to a few birthdays. I felt uneasy that there were so many people, and a little confused cos no one else seemed worried, but that also made me more at ease, because it wasn’t like a bunch of people panicking. Plus, these events were with family, so I wasn’t worried about infecting my mum cos she was also there. Although I went to the beach once and did steam therapy when I got back and drank dogoyaro [Neem] with lemon and ginger for days after.

Not really event but been to visit friends/tiny gatherings up to like 12 people. Wasn’t bad, was paranoid, got drunk and started sharing cig so was actually really paranoid for a while – since that one I’ve been to see friends, smaller scale and had people round. I’ll be out sha – restlessness but it try and keep it limited especially if imma be drinking because I clearly can’t be trusted to make corona compliant decisions when waved. Won’t be going to parties or anywhere with too many people sha but just tiny gatherings etc I’m v cool with.

I’ve been sick since Sallah. It might be all in my head because I’m generally fine, but I’m not. I’ve been going to see friends but this one was overdoing it; I was convinced into going to two Sallah parties and one turned out to be an actual house party. Not to mention we had a little Aallah party in my house. All these events featured no face masks.

I had my birthday a few days ago and invited people over. It was weird and being around people made me really anxious. I feel like I don’t know how to interact with them anymore. but at the same time, it felt really nice. I enjoyed seeing people and feeling their energy around me.