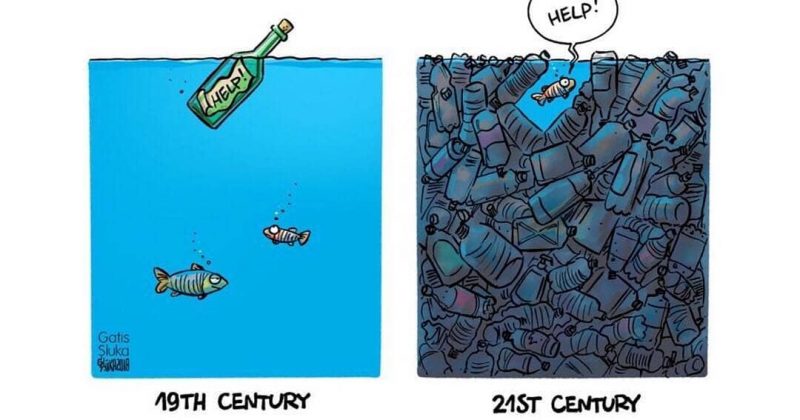 The Nigerian government has passed the plastic apocalypse into legislation

The flooded roads, submerged slums and destroyed homes have turned rainy season in Nigeria into the stuff of nightmares. The obvious culprit is the trash clogging waterways and floating to the surface to turn the main roads into swamps. Though after the rain, the water eventually subsides, the plastic trash remains ever threatening.

The Nigerian Government has joined the fight against plastic, becoming one of the 32 countries that have passed laws to manage and control the amount of plastic used by its citizens. According to the new legislation made in April, any store found giving plastic bags will either pay a fine of N500,000 or face a 3-year jail sentence while manufacturers will pay a 5 million fine.

On the surface, this new law is fantastic as the nasty impact of plastic bag pollution are clear: Plastic bags are one of the most common items collected from the world’s oceans (along with cigarette butts and plastic bottle caps). When they’re not piling up in landfills emitting awful smells and dangerous gasses, they’re littering streets, clogging drains, and contaminating oceans, where fish eat them and they eventually end up in humans. We might not have the exact figure for how much plastic waste is affecting Nigeria, but according to a UN report, banning plastic bags can cut litter down by more than 60%.

However, the Government seems to have neglected to take the nature of the country into account while making the law. The poor state of the country might pose a problem for the ban on plastic because the cheapest form of (potentially) safe water is sachet water and there’s no provision or discussion for a more suitable alternative to reduce the breakout of waterborne diseases.

Secondly, waste management systems in Nigeria are almost nonexistent so people can’t really tell the implication of irresponsible waste practices. In Rwanda, one of the first countries to successfully ban plastic bags, citizens’ sense of responsibility toward waste management and awareness about its implications was one of the leading factors in their successful implementation. Nigeria will have to match that level of dedication to implementation strategy, building awareness and enforcing responsibility.

The legislation suggests paper bags as a replacement for plastic, but that’s not a sustainable solution given the dastardly effect paper production has on the environment. For the Rwandan government, they were able to successfully ban plastic by encouraging manufacturers to recycle their bags and create a market for eco-friendly bags and practices in the process. For Singapore, they imposed extra charges on bags from grocery stores and, in Indonesian, they created organic biodegradable bags out of cassava roots thanks to innovation hubs.

Since the bill was passed into law in April. no store seems to give a hoot about this ban (everyone still raises their brows when you turn down their plastic bags), so it’s not clear how the government intends to knock this nail in and enforce the law. While we wait for the government to back the law, we can take the initiative and reduce our use of plastic. Taking a reusable tote bag with you rather than the complementary single-use-plastic bag means one less person is contributing to the traffic jams and flooding caused by plastic pollution. Telling a friend (and tell that friend to tell a friend) about the plastic apocalypse.


Tomiwa is figuring it out… @fauxbella

ICYMI: These kids in Kwara are being taught to code for free admist soot blanket