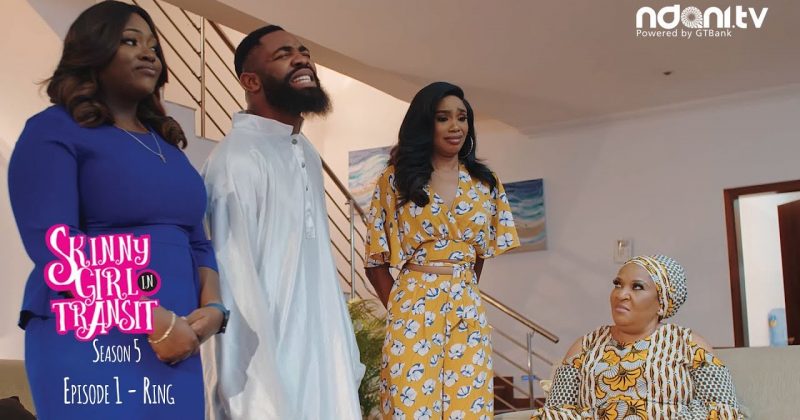 Ndani TV’s web series ‘Skinny Girl In Transit’ has become a bench mark for what Nigerian webseries should look like since its emergence on the scene in 2015. The show which boasts of big names like Ayoola Ayolola, Sharon Ooja, Abimbola Craig and Timini Egbuson began as a sitcom which traced the life of a young plus sized girl named Tiwa as she navigated the struggles of dating as a millennial woman, and her complex journey to self love.

Written by Dami Elebe and directed by Ema Edosio, Skinny Girl In Transit has racked up a huge fan base since its release, particularly due to this, however, these days is a far cry from and is now developing into full on romantic comedy, which now focuses on other young women such as Didi (played by Bisola Aiyeola) and Wosilat (played by Chioma Okoli ) are on full display.

The show is currently on its sixth season, which began earlier this year and has sent the Twitterverse into a frenzy with hot takes on the kind of topics they covered within the space of a few months. Spoiler alert, but in season 6, Tiwa and Mide are now married and the season begins with us finding out Tiwa is pregnant. As the series progresses, we learn that Tiwa has a miscarriage and now has to deal with the psychological effects and trauma that has on her personally and on her relationship with Mide.

We see as Tiwa struggles to make sense of her loss, from blaming herself to lashing out at her loved ones, we mourn and weep as she does and watching her make sense of the situation is sure to resonate with anyone going through something similar. A recent study shows that black woman are two times more likely to suffer from miscarriages than other races, and this is what makes speaking about these things in popular shows like ‘Skinny Girl In Transit’ is not lost. At any point in life, young Nigerian women are under undue pressure to perform perfunctory gender roles, and the series shows this with how much importance Tiwa & Shalewa’s mum, (hilariously portrayed by Ngozi Nwosu) places on whether they’re married or not. Even when you “finally” get married, there’s rush to get to the next step and have children, without anyone really taking time to know and understand the risks involved. 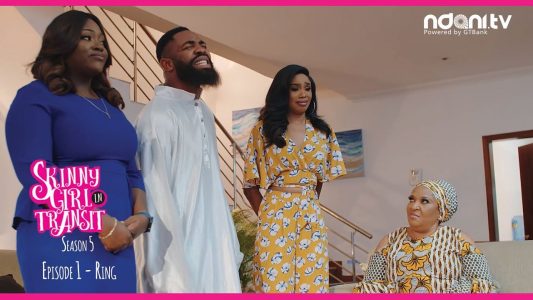 Through Shalewa, we also get to see the struggles of living with African parents as a single millennial woman, in past seasons we have watched as Mrs Awosika constantly worries and stresses her girls about finding a man and getting married. However, with this new season her efforts seem to have intensified as her first daughter is now married. Shalewa gets the short end of the stick, as she finds her voice and fights for herself within her own family home, who is trying to get her out as though she’s a guest. I’m sure we can all relate to this. This could very well be wha clouds her judgement when it comes to her choice of men, throughout the series, and the series’ in-depth coverage of this issue is sure to find a place in the hearts of many young female viewers who have had to live through the same constant nagging from parents.

Perhaps the most important social issue addressed this season is the physical and verbal abuse one can sustain from their romantic partners. Shalewa (played by Sharon Ooja) has had nothing short of a tumultuous dating life, she’s just broken things off with her long term boyfriend Mohammed who incessantly cheated on her, and her attempts to leave him and forget her trauma leads her into the arms of Kwame. Kwame arrives on the scene with grand promises of love and tries to break Shalewa’s walls down with constant reassurance, but we later find out he was just waiting to unleash his madness.

Shalewa thinks she has found the perfect rebound, only to realise he’s aggressive and abusive further down the line. He instantly becomes cold and even uses force to restrain her from touching him, and it’s not until we see her stand up to him that we see him for who he really is–a coward with low self esteem. The inclusion of character like Kwame does serve its purpose, to let viewers know how commonplace this behaviour is and how easy it is to fall into such a situation without ‘deserving it’ or ‘asking for it’ like society wants us to believe.

On a smaller scale, we also get to learn about some outdated laws in our country like a woman not being able to post bail. Tiwa’s aunt, Dupe is refused the option to post bail for her adopted son solely because she is a woman, and she is asked to come back the following day with a man instead. This is similar to her earlier plight she went through during adoption, where she was refused a child solely because she was not married. Even her sister, chastises her for her ‘poor choice’ to not get married, and blames this choice for not being allowed a child by an adoption agency. Through her character, we get to learn how older unmarried women are treated by Nigerian society, and learn the subtle ways society tries to stifle their voices.

‘Skinny Girl in Transit’ has definitely served its purpose, and offered nuanced and well-thought responses to social issues we face here in Nigeria. They haven’t always presented it in the best way, and definitely have some questionable views presented here nad there, but when you dig (very) deep, the nuance isn’t really common on Nigerian TV and it’s commendable that they are doing this at all. We’re hoping that as we all become more aware of our place and power in society, younger female writers will be hired to carry the story along and the series will evolve with us.

Next Article NATIVE Exclusive: BeBe Zahara Benet is on a mission to bridge the gap between her two worlds