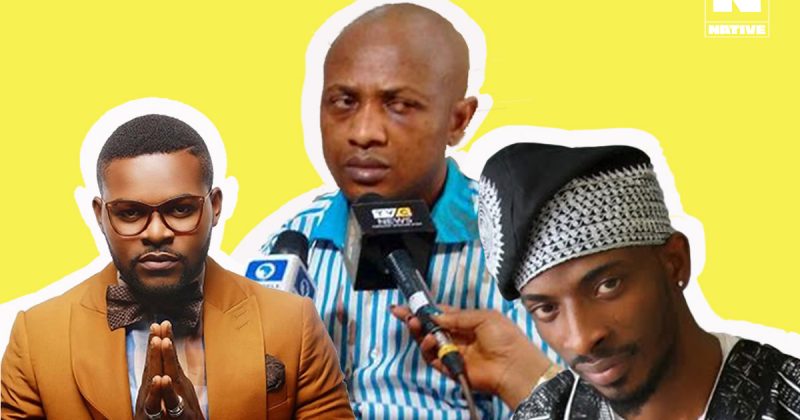 Late last month, a short clip of Falz The Bahd Guy speaking against the Yahoo Boy culture in one of HipTV’s Trivia videos, went viral on social media and triggered a tweetstorm. Without directly mentioning any musician, Falz highlighted in his signature ‘Boda Taju’ accent —albeit with a serious undertone, musicians who laud the activities of Nigerian fraudsters in their music, saying “waya waya mo fe sa se”. His choice of words led to the conclusion that his statements were directed at singer 9ice, who recently released “Living things”, which had some very questionable lyrics.

Before long, opinions were flying across the Internet. The most vocal camp brought up Falz’s  2016 song, “Bahd, Baddo, Baddest”, where he featured Davido and Olamide, and pointed out that he sanctioned Davido taking potshots at his baby mama’s uncle, Dele Momodu. Their argument was, if Falz could let someone disrespect an elder in his music, what right did he have to speak ill of Yahoo boys and the people who praise them.

Paradoxically, at around this time, Chukwuduneme Onwuamadike, otherwise known as Evans The Kidnapper was making the rounds on social media for accusations of a career in intimidation, kidnapping and extortion that had netted him billions of Naira and enabled him live lavish for more than a decade. As more people discovered the nature of his crimes, many people began to publicly sympathize, the sympathy snowballing into a hashtag, #FreeEvans that tried to pressure the Federal Government into pardoning the kidnapper.  Falz The Bahd guy became a villain for speaking against the glorification of criminal activity through music, while Evans became a hero for abducting people with the trending Tag #FreeEvans.  It’s uncanny how what should be a defining line between right and wrong became a debatable trending topic, but here’s why and how.

Falz is the son of celebrated activist and civil rights lawyer Femi Falana, so his perspective on crime has obviously been shaped by his heritage. But that heritage is also privilege, it means Falz got to study abroad in some of the best schools in the world, can pursue a career as an independent artist in a cut throat industry, buoyed by the certainty that he will always find a job if music doesn’t work out. Falz Falana’s name opens doors for him in the industry, that only money opens for others and many upcoming artists are disadvantaged and desperate enough to take money from anyone to make their dreams come true, even fraudsters and cultists.

Falz can call for a boycott of lyrics that reference or glorify Yahoo boy culture because he has hardly been hit with the circumstances surrounding those lyrics in the first place. Backed with a knowledge of the law, he knows he cannot be played in his monetary and copyright concerns. But what of the others who don’t know? Their suffering is not the same as his and it shows in every way. The Yahoo boys open their arms to them for many reasons, most of them money related.

The Nigerian music industry is way more complex than we understand. It is also very, very broke. The labels offer many artists manipulative 360 deals and minimal support, hoping that they ‘blow’ so their labels can cash in. There is virtually no money from album or single sales, piracy effectively has that revenue stream dead in the water. Revenue largely comes from live performances and concerts with inflated ticket prices, part money laundering scheme and part showboat for Yahoo boys who have arrived. And it takes three to five years for even the talented artists to go for performing for free in back water events in the hope of gaining exposure to headlining their own shows. Expenses do not magical disappear in the interim. Nigeria is a place that forces you to make hard, often criminal decisions.

The ecosystem in which the labels, artists and Yahoo boys operate is one which lacks an identifiable structure to keep out the third party and profit the insiders. The Yahoo boys shouldn’t have this much influence in  the music industry if it was structured right.

Sadly, as socially correct as Falz’s message against online fraud is, it is not his place to shun others for referencing it. Even if he has managed to get by without assistance from these celebrated scammers, he has to acknowledge their influence on our music industry. Just as you can’t expect hip-hop acts to ignore the violence and crime in their communities regardless of who is to blame for these crimes because ultimately, it is their reality. But they managed to grow beyond merely glorifying the lifestyle to detailing their reality as we saw Kendrick do on Good Kid M.A.A.d City where he got drunk, robbed a store, was involved in a drive-by, gave his life to Christ and even got shot, all on the same day. Perhaps it was the loss of their biggest artists (Biggie and Tupac) to violence that inspired rappers to discuss progressive themes even if it’s still rooted in drugs and violence as Jay Z does on his recently released 4:44 album where he encouraged young hustlers to invest their money and not live fake lives.

But in Nigeria, the poor expect pity while the privileged are frowned on and questioned. And in both scenarios, the narrative is always lost because the thief wants you to ignore the fact they committed a crime while the privileged don’t want to discuss the circumstance around their wealth. Artists get lost trying to appeal to Nigeria’s love for a suffer head story that forced Davido to sing “Back when” confidently or just ignore the reality all together as Falz seems to be doing.

The Yahoo phenomenon is a reality that we can’t ignore simply because some artist is privileged enough to remove himself from the everyday Nigerian’s struggle for financial backing. Though Falz is obviously talented and his hard work has earned him the respect of critics, it’s slightly hypocritical for him to attack the culture that pays other artists when he could just have easily addressed the label’s lapses that created room for the fraudsters to take root in the system. The industry is too expensive for many artists to bank roll independently so if labels promoted their artists better perhaps the problem would be reduced.

ICYMI, Read Up: Falz called out your faves for hyping Yahoo Boys

Next Article World population day: Do millennials already have overpopulation figured out?