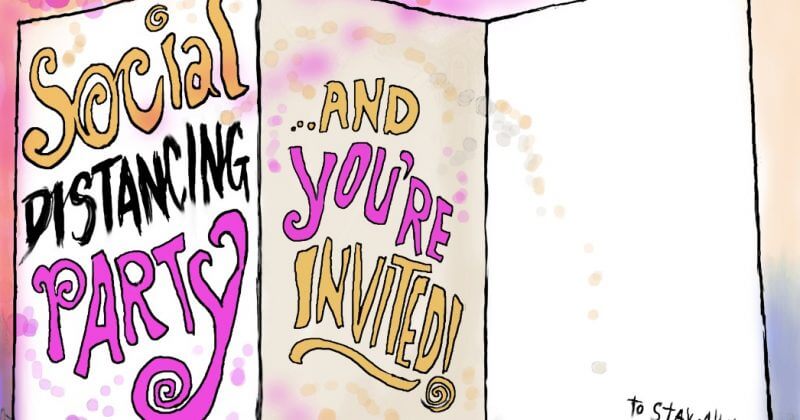 Not to be a drag, but we are still very much in the middle of a pandemic. Under normal circumstances, we would be partying every weekend, eating out at our favourite restaurants and travelling around the world, but the last ten months have been anything but normal for many of us. The disastrous COVID-19 virus continues to threaten lives around the globe and disrupt life as we once knew it, and, contrary to what half your timeline may be saying, the arrival of the new year was not the much sought out end to its deadly scourge.

Although there are ongoing conversations about making a vaccine available here in Nigeria, the reality is still that social distancing measures need to be in place to ensure safety for everyone in the foreseeable future. This has not been an easy feat for the extroverted amongst us (and even for ambiverts like myself), who have been forced to maintain socially distancing guidelines in efforts to curb the further spread of the virus. Over the Christmas period, an increasing number of Nigerians, including those who maintain a permanent residence abroad, began to flout the restrictions. They found a way to create their own flexible social rules, where they either adopted frequent testing regimens or kept their partying outdoors; while others relied on their gut instincts to determine which events were safe to attend.

Now, of course, as the days roll by, the number of cases continues to rise at an alarming rate, and we are now reckoning with the reality that we may very well continue to exist side-by-side with the virus for several more years – or at least until the vaccine has been made freely available for all. Whilst December was far from ‘detty’ (as we have now come to expect annually), streets weren’t exactly spot-free either. Rather than halting social gatherings altogether, there were events and club nights every other day despite the rise in cases in the country. To this end, we spoke to a number of young Nigerians about their experiences attending non-COVID compliant parties over the past month. From run-ins with law enforcement to being charged to mobile court, here’s what they had to say:

I didn’t have a personal experience but my friend went to a club in Lagos and when the task force came in, she was too drunk to escape; they were picking up mostly women in the crowd. They got moved in a Black Maria to a police station on the island. On my way home, I got a call that my friend was being transferred across several stations from the island to the mainland and before I was able to locate her, it took several calls and pleas. When it came to bailing her, we were delayed because they bailed white people out first and we later had to settle for a bail payment at a mobile court on the mainland. It was very traumatic and I wouldn’t advise any of my friends to move about at those times. It’s not worth it.

So I actually hosted a COVID-19 party last month on the 26th. We reduced the number of tables in the lounge setting so as to reduce the amount of guests we would be having in attendance. We also ensured the use of face mask and hand sanitisers before entering the space. The strict adherence to the use of face masks was not easy, people removed them to eat, drink or smoke so that defeated the purpose. We were afraid of police interference and actually made plans to lock the club so that there was no entry or exit of guests past 12 am because that would draw unwanted attention to the event location. Even though it was risky doing it, I would still host another party and even as we speak right now, I am now planning my next event. If the laws allowed, we go get another party this month.

I got arrested with about nine of my other female friends when we went clubbing in Lagos. We were in police custody from 3 am to 5 pm and it was the most traumatic experience ever. We were kept sitting on the floor under the hot sun for hours with nowhere to eat, [no] contact [to]people outside, [no chance to] drink water or use the toilets. If we saw a socket, we would quickly hide and charge our phones so we could contact someone on the outside. The female staff were hitting us with sticks and now I have bruises all over my body and I had to visit the hospital when I came out. At 5 pm, they brought cameras to record us and show them benevolently giving us water on camera. We had to pay a fine and we went to court to get us out of there but they told us there would be a subsequent hearing but imagine me going. They will never see me again.

I haven’t actually got arrested for clubbing but I’ve been at the club so many times this past month where we had to quickly evacuate because the police or the army were on their way to cart people off to the cell. I’m someone who firmly believes in leaving when it’s time to leave and not forcing things so once I see that the club is clearing out because someone got intel on a possible arrest, I’ll be out of there so fast you don’t have to tell me twice. My friends, on the other hand, would be like oh let’s hit up the next event and have fun there but I’ve never been a fan of club-hopping especially not in these times where it’s too risky.

This December has not been the same as every other Christmas but it was still fun because there were a couple of events. I was never worried about being stopped by police at first because everyone was going out and breaking curfew so there was never any fear. But then I was arrested on the way home once, I was on the way home with my girlfriend and I saw officers in the blue army uniforms blocking movement on the road. The head officer then sent one of his men to take us down to the station and there were about 10-15 people already at the station being arraigned. I was just very worried about my girlfriend at that moment because you never hear good stories about the police. They took my shoes and my chains and they put us in a cell with the prisoners already at the station. The prisoners were very violent and said they would rape or assault us because we were new in the cell. We were there for about 4 hours and it was very traumatic but we made it out in the end.

Next Article Young Nigerians have refused to get their NIN and who can blame them?