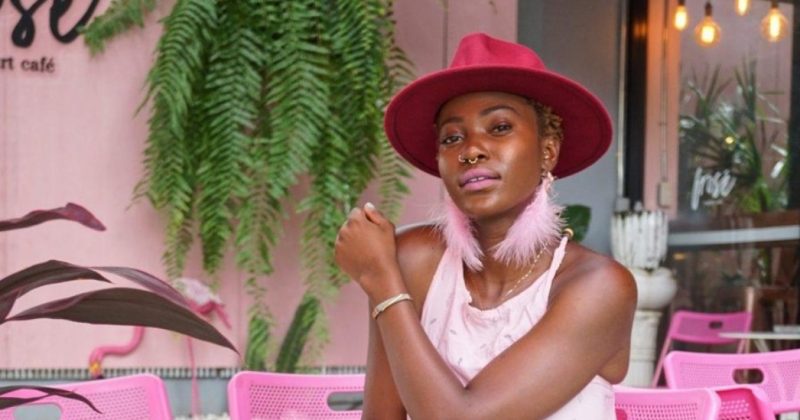 Globalisation has made the entire world more accessible, and over the last few years, the need for authentic African stories has become more and more apparent. Science fiction isn’t typically inclusive of African stories, however, more recently, stories like Tomi Adeyemi’s ‘The Children of Blood and Bone’ and Marvel’s ‘The Black Panther’ seek to delve into themes of afro-futurism, by exploring African stories within the science fiction scope.

Born in America to Nigerian-Guyanese parents, indie filmmaker, Chelsea Odufu has always been fascinated with merging her experience as a black woman in the diaspora with her passion for spirituality and afro-futurism. Her most recent award-winning film ‘Ori Inu: In Search of Self’ was written and co-produced alongside her brother. Inspired by the Black Arts Movement of the 1960s, the two set out to remove negative stigmas placed on traditional African religions, and critique ideas of cultural and religious supremacy.

Speaking about what inspires her work, Odufu said:

The work I create fuses my love for afro-futurism, folklore stories, activism, and fashion to create a more meaningful representation of Africans in the diaspora. Afro-futurism allows me to break rules as a Black storyteller while unraveling rejected African histories, American history books don’t mention. I also think spirituality is central to my work because a journey in search of self is ultimately a spiritual one and my work reflects that.

We get to see more of this in her upcoming television series, ‘The Black Lady Goddess’ which will focus on similar themes of spirituality, freedom, womanhood and afro futurism. The series is set in the year 2040, and will follow the story of activist, Ifeoma Washington who is living in a time when humans have discovered that God is a black woman. In her story, reparations have been made in the amount of $455,000, and each person of African descent has received this money from the government.

The first season will follow the aftermath of this, as the new God is aiming to end the millennia of white supremacy, serving as a pillar of strength to women and people of colour around the world. The world seems to be on pause since the ‘rona reared her ugly head, and Chelsea’s upcoming series seems very fitting to our current reality. While taking some time out for herself, we were able to grab her for a quick chat ahead of the season premiere, where she talks all things from her experience working on under legendary film director, Spike Lee straight out of university to her passion for telling African stories from a futuristic perspective.

NATIVE: How did you arrive at God being a black woman in ‘Black Lady Goddess’?

CHELSEA: Several things moved me to tell this story, so it’s always hard for me to answer that question. I initially was compelled to create ‘Black Lady Goddess’ due to my frustration with cultural appropriation, an experimental piece that allowed me to put my frustrations into a conversation. I knew that I wanted the scenario to take place out of this galaxy and wanted God to be an African woman.

The project was my way of creating my own Black mythology, and it also spoke to my belief that Black people are descendants of the original man therefore we can not be cultural appropriators. After working on this idea for about two years my brother suggested I include a reparations plotline into the story which has brought it to where the story is now.

NATIVE: What would you say was the most difficult part of bringing this idea to life?

CHELSEA: The most difficult part was achieving high-quality visual effects with a minimal budget. This project was extremely CGI heavy so creating an alternate galaxy for ‘Black Lady Goddess’ was a challenge. Not only did I experience a learning curve but it was an extremely expensive part of the production that took us almost four years to figure out.

NATIVE: In what ways does your work as a digital nomad feed into your career as a director?

CHELSEA: I think the biggest challenge when pursuing your dreams is being able to stay motivated and inspired. Once you lose the passion you lose your drive. Traveling for me is what fuels my creative spirit and allows me to connect to cultures in ways that inform the experiences I look to showcase. I rarely travel for just leisure and always find a way to leverage a creative opportunity for myself while I’m on the road. Some of my travels have allowed me find investors that invested in my film projects, some of my travels have allowed me to create content that expanded my portfolio in ways that I attracted future opportunities. Being a digital nomad makes me a better storyteller which makes me a better director.

NATIVE: You mentioned this show is heavily inspired by the Mali tribe, what in particular drew you to this culture?

CHELSEA: Well, the Dogan tribe in Mali has a fascinating creation narrative, unlike anything I have learned about. They believe they have already met their creators in outer space who come from the Sirus B star and passed along information about the formation of the atom and that the Sirus B star has a clone and dwarf star. NASA was fascinated with the fact the Dogans knew this complicated information before the development of the telescope. My research on this tribe led me to creatively consider the way humanity was created outside of a Christian lens for the purposes of this show.

NATIVE: It seems like you’re creating your own world in this new show, how much of it is based on personal experiences?

CHELSEA: World building is always a challenge so I definitely approached it as history repeating itself to help me envision the future. Allowing my mind to break rules and reconstruct a whole new reality definitely took time. My personal experiences often shine through in my characters. My protagonist Ifeoma is inspired by me, she has my middle name and many qualities both good things and flaws. In addition to my protagonist, many of my characters are direct representations of people in my life. I know my friends sometimes hate that haha!

NATIVE: How are you spending your time nowadays with everything going on in the world? How do you keep your art alive in these times?

CHELSEA: Ahh, I’m trying my best to stay safe and sane. I think this social distancing/quarantine time is the perfect moment for self-reflection so I have been doing a lot of that. Really trying to prioritise what’s important to me, the life I want to live and how I will adjust my strategy to achieve what I want in life. I think it’s the perfect time for people to pour into their spiritual cup and connect with God.

Trying to keep my art alive in these times has been a process but, I am doing best to stay productive. Every day I try to send out emails, work on outstanding edits, develop video treatments, or flush out my production bible. More importantly, though I am allowing myself to be still which is nearly impossible for me when life is moving.

NATIVE: What are your plans for the future?

CHELSEA: God willing once this pandemic passes I hope to be back on road; directing other people’s films or commercials globally while working to get ‘Black Lady Goddess’ developed by a studio or production company. I am also interested in spending a lot more time in Los Angeles and Lagos moving and shaking between both of those industries.

ICYMI: Nnedi Okorafor on africanfuturism and the challenges of pioneering

Next Article NATIVE Exclusive: Ictooicy uses music to keep herself in check