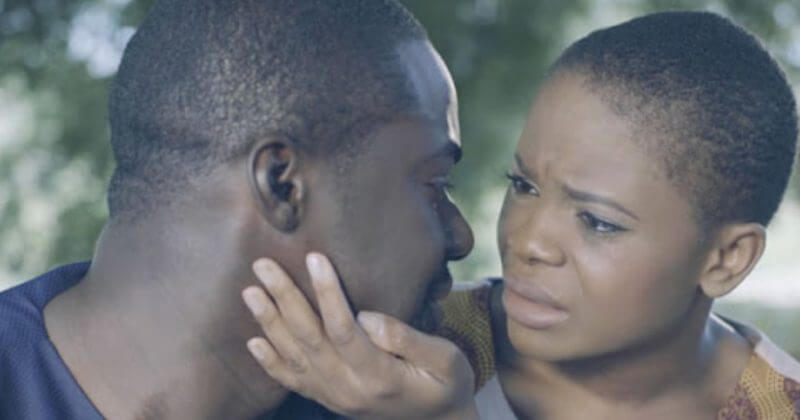 Back in February, Netflix announced its official launch in Nigeria, a move that was highly anticipated for many viewers, since the procuring of Genevieve Nnaji’s ‘Lionheart’ back in 2018. Since then Netflix Naija, as they’ve dubbed themselves, has been regularly updating their catalogue of Nollywood films and shows, and it’s been interesting seeing new audiences react to films that have come out years ago, in some cases.

It was through this ever-growing bank of Nollywood films on Netflix that I stumbled across the Daniel Oriahi’s 2018 film titled ‘Sylvia’, which has just been added to the streaming behemoth. Despite not being a Netflix Naija original, procuring the film, and a number of other Nollywood films like ‘Sugar Rush’ and ‘Your Excellency’, on license for an online audience to consume shows Netflix’s willingness to help showcase the diverse playing field of filmmakers and directors from these parts to a much wider audience. Unlike other films on Netflix Naija, ‘Sylvia’ was a commendable attempt at a psychological thriller that kept viewers at the edge of their seat, but ultimately it left little to be desired as it peddled familiar tropes that have been explored again and again in Hollywood.

‘Sylvia’ follows the story of Richard, a successful businessman (played by Chris Attoh) who finds himself in a psychiatric home. His well-polished diction and articulate speech quickly distinguish him from the other patients in his ward, and this is how we learn, through flashback, the harrowing tale of how he landed in a psych ward. Richard narrates the story of how he had found a friend in a young girl named Sylvia, a figment of his imagination which he could only visit through his lucid dreams and the aid of a red hibiscus.

As the years grew by, Sylvia and Richard’s love and friendship blossomed, as she was always there for him whether he needed help with school or work and when his mum passed away, Richard had no one to turn to other than Sylvia. After school, Richard moved to the city for a bigger corporate job and there he found Gbemi (played by Ini Dima Okojie) who he fell in love with and later married. Pissing off Sylvia with this intention, his first love vows to prove just how much she loves him by seeking revenge on Richard, and his spouse, for using her love when it was convenient but dumping her for a ‘real’ girl when it was not.

Sounds familiar right? Well, it’s because we’ve seen it before. I’m sure you saw it in Beyoncé’s ‘Obsessed’, and if you missed that then you definitely caught it in Netflix’s ‘Fatal Affair’ released just last month and in a myriad of other Hollywood movies released over the years that explore the murderous stalker ex plot. It seems that the stalker-thriller trope is a very popular genre, even for Nigerian audiences. The plots aren’t that greatly different, save for minor additions, but the main premise consists of a willfully oblivious man, his current lover or wife, his ex-jilted murderous lover, and the fight to win him over, resulting in at least one person dead or greatly injured. It’s a played-out predictable plot with ‘Sylvia’ now joining the ranks of films in this storied genre.

The only catch this time is the attraction for Nigerian audiences – the spirit wife. As a Nigerian, I’m sure we’re all familiar with the premise of spiritual spouses as religious culture in these parts is rife with tales of people finding out they’re entangled with a spouse from the spiritual realm. As spooky as it may be, we grew up learning that those spirits were evil, and if you ever found yourself attached to one then you needed all the deliverance and anointing oil, because it was a hint at larger monitoring forces at work in your life.

With ‘Sylvia’, Oriahi delves into this supernatural phenomenon as he plays out our parents’ worse nightmare on screen. Sylvia is powerful enough to materialise in the physical world, despite being reduced to barely the figment of a man’s imagination. She’s the villain because she tricks Richard to kill those who he loves dearly, but there is a human element to Sylvia. She may be the most powerful evil being in the universe but she feels just like we do, she gets sad, she gets heartbroken and she gets angry when things don’t go her way.

Indeed, the best and most enjoyable part of ‘Sylvia’ is its acting performances, with Zainab Balogun especially (who plays Sylvia) taking full control of the reigns and really excelling in this role as she shows off a level of depth and self-awareness like we’ve seen before from her. She commands each scene she appears in with little effort, and even when she’s missing from the scenes, the sighting of a red hibiscus reminds you that she is always there, like an omniscient character.

Despite these little enjoyable moments in the film, ‘Sylvia’ was full of awkward corners and left very little to be desired in the end. You knew from the onset how it would play out; spoiler alert, he loses his wife and later his best friend because of Sylvia’s bloodthirsty revenge and it’s his determination to escape her that lands him in the psychiatric ward, spending out the remainder of his days to escape facing the jilted lover. The stalker ex is an incredibly played out trope, so why do we keep getting more iterations of the same storyline over and over again?

The truth is that there is something comforting about the familiar. Actress, Nia Long who herself recently starred in one of the many iterations of the stalker-ex thriller, recently shared that the success of the genre was due to the habitual nature of humans. She says: “People know what to expect. I think people love the idea of knowing somebody is crazy, and somebody might die. They’re all for it. You can just sit there and be entertained for 90 minutes and give your mind a break from the very interesting times we’re living in right now.” So, perhaps this move to include ‘Sylvia’ on the Netflix catalogue is helping viewers get a much-needed break from the tumultuous state of the world right now, through their fix of the predictable.

Still, given that filmmaking is a creative medium, it should not be too much to expect that our filmmakers get creative, or, what is more likely the case, are given the full scope to be creative by the studios and execs who make the crucial decisions in the big budget film industries. Of course, the stalker-ex thriller is a tried and tested genre that is sure to leave the audience satisfied (unless, like me, they are thinking critically about the cultural implications of once again feeding into the perfidious stereotype of unhinge female lovers), but it is frankly a cop-out for studios to suggest that certain movies wouldn’t sell when no one has tried to sell them. Given how gratuitous narratives persist in contemporary Nollywood – for example the wedding storyline that suggests marriage is the pinnacle of a woman’s life, or the existence of a patriarch who remains ‘head of the family’ the even after his death – it is about time we began demanding more imaginative, diverse and inclusive movies. This is not simply for entertainment’s sake, but more importantly for the sake of our society, so that we may adequately reflect the multifaceted realities of Nigeria and also encourage the viewing population to imagine a better future for the country.

With that said, ‘Sylvia”s inclusion on Netflix is a noteworthy moment as it inadvertently highlights the range of Nigerian directors and filmmakers now streaming on Netflix and opens up wider conversations on the caliber of films to expect on the growing Nollywood catalogue. There is a case to be made for allowing this growing industry to gauge audience reactions online to a slew of Nollywood movies, and in as much as we want quality movies on Netflix, it won’t be uncommon for the streaming platform to feature both high-end and low-end films in its catalogue.

Surfing through the expansive catalogue may be a long and arduous task when it comes to finding the right film to watch, but perhaps therein lies the beauty of it; not all Hollywood films are spectacular, some are deeply mediocre and we should be okay getting the same on Netflix Naija. It gives us a chance to really question the caliber of entertainment we’re receiving and allows for films like ‘Sylvia‘ to take on new life and find new audiences.