A celebration of NATIVE's fifth anniversary.

This week, after half a decade of being the voice of the African millennial and Gen Z, the NATIVE will be turning 5. Five years down the road, it’s time to reflect on the work we have done and how impactful it has been for a generation of young people attempting to contextualise this period of stellar African art.

In conversation with people who are hip to what moves culture, many pick out 2016 as the year when African culture had its sliding door moment. Some approximate it to the distinctively African twang to the festivities of summer ‘16 powered chiefly by Drake’s monster hit, “One Dance”. Others ascribed the shift in perception towards African culture to the exciting and unique cultural talent springing out of the continent, but what cannot be doubted is that from 2016 onwards, the NATIVE has duly documented our stories and shaped the face of alternative youth culture.

Like our, Editor-In-Chief Seni Saraki said, The NATIVE was formed with the idea of taking stock of this great African art renaissance, and, since our formation, our commitment to honest, empathetic storytelling and reportage has been unwavering. In the time since our formation, the NATIVE has played a key role in shining a light on some of the most important landmarks and issues of this generation of young people and, after 60 months of doing just that, this week marks the fifth anniversary of the Native’s establishment.

Of course, this could not have been possible without the support of our team and community. Importantly, the occasion of our fifth anniversary is a call for celebration. In five years, we have gone through thousands of articles, placed some of Africa’s biggest stars on our cover, and collaborated with Nike on an original jersey design.

To kick off collaborations, we are hosting an intimate friends and family invite-only celebration of all things NATIV5 where we hope to swap stories and tales of what archiving the Great African art renaissance has looked like. And later in the week, on Wednesday 22nd of December, NATIVE Sound System will be hosting a show in Lagos for members of our community – exactly five years on from our first ever festival.

We, of course, promise to make it worth your while and keep to all safety precautions. We hope to party with you soon! 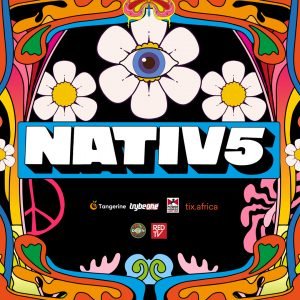