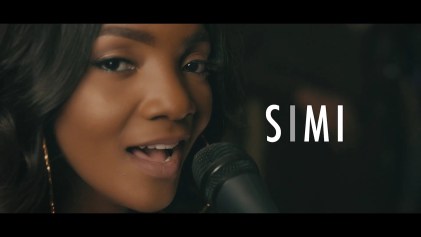 Music inspired by popular music from veterans brings a nostalgic element that often makes the song timeless. This is the case with Simi’s “Aimaskio” off her ‘Simisola’ album debut. “Aimaskio” is inspired by and shares a chorus with Commander Ebenezer Obey’s song with the same name released over 30 years ago. Like Ebenizer Obey’s “Aimaskio”, Simi’s track is a spiritually inclined song urges to wait patiently on God’s time.

“Aimaskio” captures the hope that often accompanies the phrase ‘Gods time is best’. Aje Films directs a video for which Simi plays the narrator supported by The Banjos. As she sings “you think God no dey your side, and you want to find another way to prosper”, the video shows a woman saddened by rumors she overhears as she walks by her neighbors, a little girl troubled in school and a man looking tirelessly for a job. Simi wonders why they worry and asks if they’ve forgotten God’s promises “Abi O ti gbagbe ileri t’Oluwa se”, as we see things turn around in various ways for our protagonists – the woman’s household remains loving despite what the outsiders say, and the man turns his efforts to appreciating his friends understanding that “Aimasiko lo n damu edaa [Not knowing our fated time is what troubles the soul]”

Simi also pays homage to Ebenezer Obey with brief cameo showing him giving her his blessings.

Let Simi’s “Gone for Good” wean you off the heartbreak

0000
Previous Article Wizkid teams up with Afro B to remix smash-hit, “Drogba”