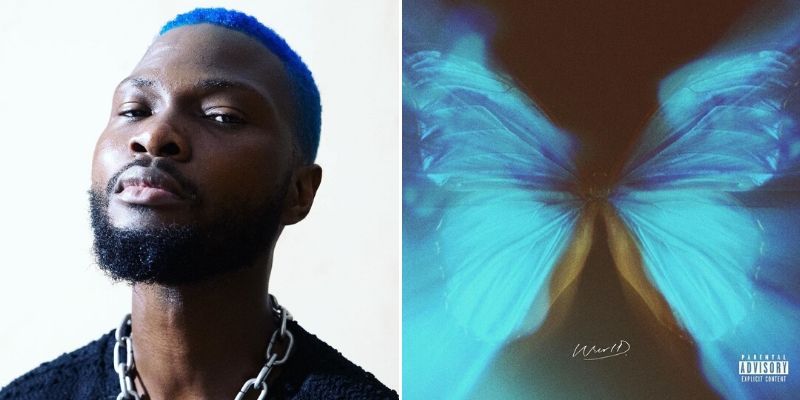 All month, WurlD has been clearing space for the reception of his third project in the span of one year, with the release of singles to whet appetites for some AFROSOUL. First came the TMXO-produced “Love Nobody”, an impassioned confessional where he sets out the parameters he needs from a relationship, which was followed up with the Spax-produced “Ghost Town”, a slower-paced vibe where he shares game with whoever’s listening to focus on the right things.

While “LOVE NOBODY” isn’t as heavy on the lyrics, the intricacy of the mid-tempo EDM beat makes you feel the weight of WurlD’s sparse lyrics explaining what he needs out of his mutually selfish romantic affair. Contrarily on “GHOST TOWN”, which is characterised mostly by the life lessons the lyrics teach, the sombre beat Spax lays down leaves room for WurlD’s lyrical ability to take centre stage, warning anyone who’s listening about the dangers of complacency. He starts off singing “Losing, never lost sight, learning never lost time”, setting the pace for the game he’s about to teach on the rest of the song, showing off his self-awareness by demanding exactly what he wants out of life and stating how he’s going to get it.

Listening to the project will make you go from inadvertently bopping your head to deeping your life in one fell swoop. Sometimes, songs like the opener, “NATIONAL ANTHEM (GROWING WINGS)” gets you to do both. Where ‘Arise O Compatriots, Nigeria’s call, obey’ fits the status quo perfectly, WurlD singing ‘Dem go try, but they can’t divide us/Dem throw stones, but it never go touch us’ against a bass-heavy beat with pulsating drums seems more fitting to a generation of young Nigerians who have clocked the puzzle and refuse to be trapped by their environment. Followed by the aforementioned “GHOST TOWN”, which tells you how to, if you haven’t yet, this message is driven home even more.

Having grown up in Atlanta, WurlD started off making music in the States, with affiliation to artists such as B.O.B, Trinidad James and others, however, back home in Nigeria was where his heart was. It shows in the music, with his intonation and use of Nigerian colloquy, and on the project, songs like “STORY” & “WAYO (KPE LE WU)” segue nicely into WurlD speaking about matters of the heart. In these tracks, he carefully combs through his emotions using familiar situations and presents the tension in a manner which show’s he’s seeking clarity more than resolve. His love songs deal more about the intricacies of his relationships with detailed explanations about what he’s feeling, and whether it’s a declaration of love or description of an agonising heartbreak, the project benefits from his intricate songwriting.

On “STORY”, the romantic air from “LOVE NOBODY” appears short-lived, and WurlD seems to be sent into a brooding melancholy, wondering why he’s been left in the dark. “Why you no dey call me anymore? Why you no dey text me? I feel lonely oh. Why you no dey find? I dey lonely O”, he sings narrating the effects of his lover’s negligence, despite his availability to receive love from her. He continues to seek more understanding of what he’s feeling on the next track, “WAYO” where he’s still hopeful for a lasting relationship but is receiving dispassionate companionship in return. “Anything you want, I want. Any time you call, I show. You know what I need and more”, he sings against the rich slow-tempo Kel-P composition, showing that although WurlD is still in pain he’s reaffirming his blind commitment and warns his lover not to “use me do Wayo o”.

On each track on AFROSOUL, WurlD remains self-assured – even when in pain – and throughout the project, he’s stating clear parameters for what he wants out of his interactions with the world. “CAN’T COME OUTSIDE” brings everything full circle, where he seems to have given up on the relationship, bringing in themes of isolation and distance, which bring about a strange and eerie relatability (considering that we really can’t go outside). It seems as though his inability to be physically present with his lover has driven an irreparable wedge between them, yet he still maintains that she’s always in his heart and that he will always be hers. While he’s come to terms with the reality of his situation, he stays grounded in what he knows, communicating with melodic chants against the intricate beat laid down by Del-B.

The 7-track project houses a diverse range of sounds, however, still manages to be cohesive in presenting themes of self-awareness, romance, heartbreak, survival and perseverance. Much like the pre-released singles, the songs on the EP can be categorised to present the two main things WurlD’s music represents; innate musicality and vocal dexterity. This is on par with the course of him music as we know it, from when we initially took note of him with singles such as “Show You Off” and “Contagious”, which introduced us to his inimitable sound that he’s only familiarised us more with it since. With three projects in the span of one year, it feels like his first; ‘Love Is Contagious’ introduced us to his sound, his collaborative project with Sarz; ‘I Love Girls With Trobul’ familiarised us a bit more with what he had to offer, and now with ‘AFROSOUL’, he’s making his mark.

What marks the difference between the previously released projects and this one, is the pace, which is fitting to the time he’s released it in. His music is usually introspective, however, AFROSOUL  shines with WurlDs ability to convey his conscious knowledge of himself, which is much needed in these perilous times. While the listening experience is delicate and smooth in his typical manner, the content is heavy and deep-seated, presenting an interesting journey into the heart of a young Nigerian man who is ditching the pretence and machismo and laying his shit bare.

ICYMI: GEMS: A list of the best songs released in the past week