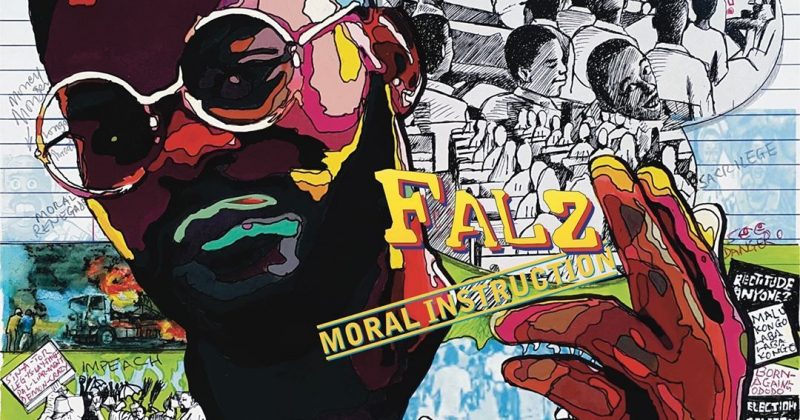 Last year’s “This Is Nigeria”, turned Falz into an op-ed magnet overnight. Even before Moral Instruction dropped, “Talk” the lead single off the fourth studio album already stirred still waters. But pundits scrutinising the rapper’s obvious conscious turn is not the only reason, Falz is atop conversations. It’s Election season Nigeria and this year, there is increased socio-economic motivation for young people to be less politically apathetic.

For a lot of older Nigerians who have grown cynical to the repeated cycle of failed promises and corrupt leadership, the promise of a younger, better-ruled Nigeria is misplaced optimism. But for Falz, like many 90s babies who transitioned with the country from military to civilian rule, the expectation for change is logical. Nigeria is in its longest democratic stretch since independence. Save for history classes, 18-year-olds who will vote this year have no personal recollection of Nigeria’s civil wars or military past. And that should mean something because all evidence points to a society that spawns its own problems.

“Hypocrite” holds up a mirror facing Nigeria to glean seemingly normalised bad behaviours that are pervasive in our social institutions. Ticking off the list from religious people who expressly break the ten commandments, to the double standard of human rights, glaring at the persecution of homosexuals.

“Hypocrite“ is bound to strike a nerve in the same manner that Burna Boy’s “Ye” did last year. The point of divergence for both songs is the differing personal philosophies of both social commentators. While Burna’s song is premised on the average Nigerian’s disposition for self-removal, Falz is a preacher who inadvertently throws himself in the murk. This perhaps is why there is no greater summary to “Hypocrite” than this cutting line: “But you say you no dey smoke, you no dey drink liquor/ but your heart e dey evil shey you see the picture”.

Falz on being accused of slut-shaming.

With attempts to critique Nigeria, there’s a tendency for the convener to risk parodying the noble-minded central figure of a Shakespearean tragedy who is often oblivious to his own flaws. The viral video of Falz, crassly expressing his displeasure at transactional sex without context or empathy, does not even fully encompass his sense of entitlement. After all, he comes from a privileged and educated background which naturally removes him from a lot of the harsh circumstances that may turn good people into “hypocrites”.  Thankfully, the thematic binder for “Hypocrite” is in the Demmie Vee-led hook, punctuated at a bass drop where he belts, “Everybody is a motherfucking hypocrite” in low-pitched falsetto.

Indeed, nothing screams “hypocrite” like a moral high ground laddered on abstinence from publicly-shamed vices if we are committing unspeakable evils when no one is looking.