Koby Martin is a proud export of Ghana. His talent and God-given gift was nurtured in his motherland and polished in the United Kingdom. These worlds merge together in Koby’s art where his African descent and background can be seen as a consistent influence in the narratives of his pieces. Koby’s work is an introspective autobiographical exploration of his life which portrays the inclusive human experience of dealing with emotions, memories, thoughts and feelings that we all undeniably feel. Through emotive figures, subjects and abstract forms, he captures beautifully the human essence of both courage and sadness which is a constant theme throughout his work that is expressed in both traditional and digital mediums.

Throughout his career, Koby has been responsible for various creative contents on a for global level for artists including Krept & Konan, Wizkid, J Hus, Wretch 32, Chronixx, Tinie Tempah and many more.  Koby’s also worked with multiple brands on various projects including Nike, Adidas, Universal Music, Virgin Records, and Mercedes Benz; of which featured Koby’s artwork painted on a limited edition fleet of Mercedes Smart Cars as well as his own limited watch collaboration with Singaporean luxury brand, LyttLabs. He also recently worked on J Hus’s newly launched clothing line and capsule collection: ” The Ugliest” where he coined the designs for the scarfs and the lining of the jackets

As an artist on Disturbing London’s roster, the record label also presents his yearly projects of exhibitions with various galleries all over the UK and internationally. He has gone ahead to have collaborations with the British Council and The British High Commission; to which he was commissioned to create a live painting at the 2019 Afrochella concert, at the El Wak Stadium in Accra, Ghana. His recent collaboration in August, 2020, had him in a live painting session with Tate Collective & My Runway Group called “Home Is Where The Heart Is”, where he was commissioned to create a painting which addressed the issue of overcoming anxiety. In 2013, Koby co-founded creative group VVX (Very Very Xtraordinary)as a platform to exhibit his works and manage his day to day activities as an artist. His artwork and various commissions can be purchased and viewed at Kobmart.co.uk

The inspiration of this painting was coined from the Aro Meta statue popularly called the “three wise men” which were sculpted by artist Bodun Shodeinde, to welcome people coming into Lagos State. Agba Meta or Aro Meta is an Art Deco statue of three Lagos white-cap chiefs and is the most iconic symbol of welcome, honour, and hospitality in Lagos. The sculptures influenced the structure and composition of this painting of three Wizkid’s juxtaposed against the background of a busy market in Lagos, which I believe symbolically invokes and solidifies the connotations of what the statue represents: something Wizkid exhibits in his music.

It also goes ahead to expand on the title of Wizkid’s recent album, titled ‘Made in Lagos’, which offers a cohesive collection of singles and an international sound quality in the production that has been seen across all of his albums to date. The marriage of these themes and concepts set the tone and foundation of the piece; with the three Wizkid’s centred in the painting, welcoming you to the city he was born and raised in. 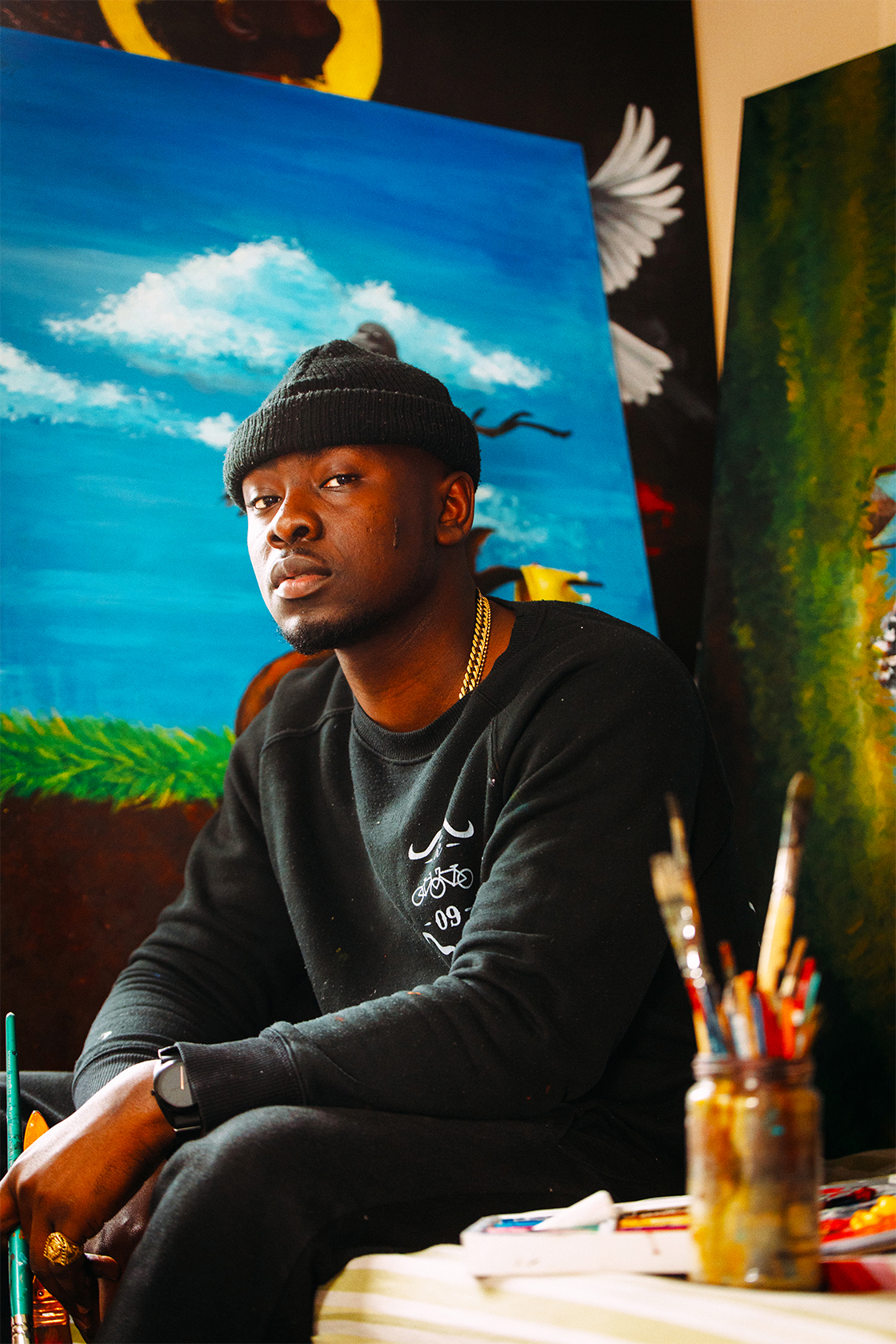