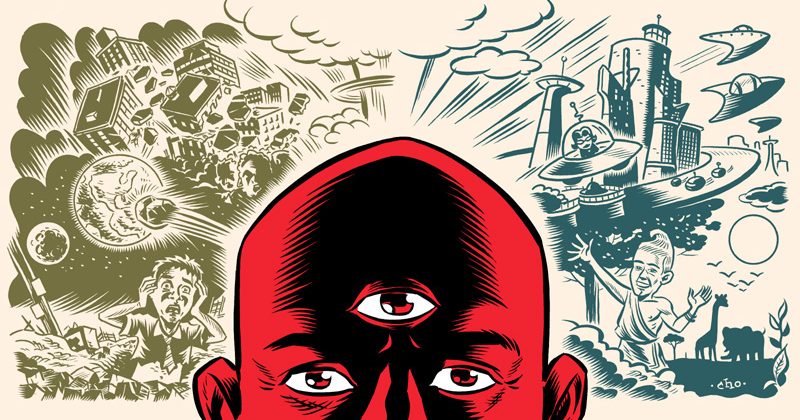 Having experienced and perhaps broken some of the barriers of opportunities we may assume are peculiar to our geographic location, Toye offers a well-rounded outlook on whether or not greener pastures are ever what they seem.

I saw this tweet and couldn’t stop thinking about it. 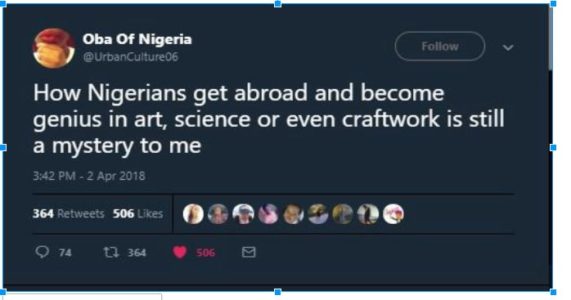 To answer the question, we must go to the beginning.

Because every African child is raised to seek a baseline range of accomplishments as we mature, every phase of our lives comes with its own unique set of anxieties; you worry about grades, until you have to worry about getting a job, then you swap the latter for a new goal, to keep the cycle of life going, basically.

In this warped process of growing into our own skins, we’re all forced to drown in the weight expectations, overestimating our capabilities for excellence to delusional levels. As we grow older, heartbreak and disillusionment sets in once it occurs that perhaps some people do have two heads. It gets worse when you realize that life is a twisted extension of a kindergarten playground with a “members only” sandbox and you need certain privileges to enter.

It is a universal law though, that only a few can [and will] actually get to the top. I begrudgingly indulge the assumption working with more resources may accelerate career growth outside Nigeria. But it’s also just as noteworthy that all these perks of emigration would be irreverent if the person didn’tーby stroke of ambition, luck or biologyーbelong at that top spot.

While this stirs-up the age-old argument on whether high-achievers are born, or made, it doesn’t mean we’re not as well-adjusted adults as we think we are. It just means the top 1%ーin any strata of lifeーis only a single percentage of multitudes who share varying shades of mediocrity in common. It also means, even at the top, life has taken a fundamental understanding of consequence and task-mastering the art of keeping up. Otherwise, toppers must learn the lesson the loose tightrope taught the gymnast; If it can go high, it can come down, hard.

Chimamanda Adichie’s legendary TED talk, on the dangers of a single story, echoes a similar but divergent perspective on what happens when people only opt for parts of the wholesome narrative. Many Nigerians understandably share a similar mindset with the tweet above; that Nigeria is the only obstacle in the way of a maximum potential that would’ve been a smooth sail in any other economy.

That premise is false.

Business Insider reported American “Consumer-debt levels are now well above those seen before the Time of Shedding and Cold Rocks”. According to the NerdWallet,  “Americans’ total credit card debt continues to climb in 2017, reaching an estimated $931 billion — a nearly 7% increase from the previous year”. This report by The Guardian speculates that British citizens may be on course to be halving personal income month-to-month to service mortgage and car loans. Other developed countries with similarly insane household debt levels like Australia and Japan, have had to implement policies to avert major financial crisis.

The problem with that narrative is only more glaring at the individual level. For every Nas, who is a legend in hip-hop circles, there is a Wale who just got dropped by his label. For every 4.0 graduating CGPA caption posted on graduation week social media, many dropped out for bad grades, got expelled or moved back home because their parents couldn’t continue paying tuition. For every middle-class Nigerian family that saved up enough to successfully emigrate their comfortable life, you can bet your ass, there are thousands more whose children had to join the U.S Army for health insurance and a permanent residence.

Again this doesn’t mean you should ever settle under any circumstance. Human endeavour itself is predetermined on striving to be better, and people who already embody this betterness are the finish line and the gunshot you hear at the start of the race of life. However, understanding your current limits is very helpful when aligning who you are with where you want to go.

In Nigeria, we are forever swirling in the waters of our over-dramatized existence, thus the search for a higher purpose/meaning outside religion is a fool’s errand. It’s not odd that these same people who’ve read about miracles in their holy books, pray against the enemy’s evil eye when they feel they are not making progress in life. If you have been taught to all your life to move chronologically from point A to B, getting stuck at a solid Lーlike joblessness after Uni, or singledom after doing all the things a “modest woman” does to be a “good wife”ーmay leave you at God’s feet, imploring him to ask your Aunt Chi-Chi from the village what’s really good?”

Where it all crumbles though, is that a society that uses a single scale to measure the extent of an individual’s fulfilment will most likely ignore all the peculiarities of everyone’s personal legend. Think of these examples: The story of that speed painter who went viral after sketching a tweeter, may have turned out differently if he’d been a poor black American who had spent all his youth gang-banging to survive the streets instead of practicing art; International students make up a multi-billion dollar industry for American colleges, because even American households can’t afford to pay, so children have to take on heavy student loans to pay for their own education; If there is somebody for everybody, then nobody is for everybody, and that means and we all have a narrow range of potentials who can match our goals and interests.

“Are Nigerians abroad more successful or are you just failing at life right now?”

“Who the fuck wants to know?”

The biggest argument to support this idea that Nigerians thrive in abundance, I’ve noticed, often bullishly romanticizes the post-colonial years that culminated Nigeria’s oil and agricultural windfall. I have no problem believing fairy-tales of a pound to a dollar in 2018, but I’d like the same people who make those claims to keep factors like population, national literacy, and per-capita income within context too.

The Nigerian government has indeed poorly adapted to changes in our societal structure over the years, but in any case, we would still be products of our environments no matter what the fates are. When you’re done feeling sorry for yourself, you can revel in the bliss of knowing that this social media age is all about storytelling, and you can start sanitizing your mind by separating fake news from the facts or at least telling your own damn stories.

Psychology of Things Unknown is a weekly column by Tomiwa Isiaka, published every Saturday.

Why We Need To Talk The Psychology Of Things Unknown