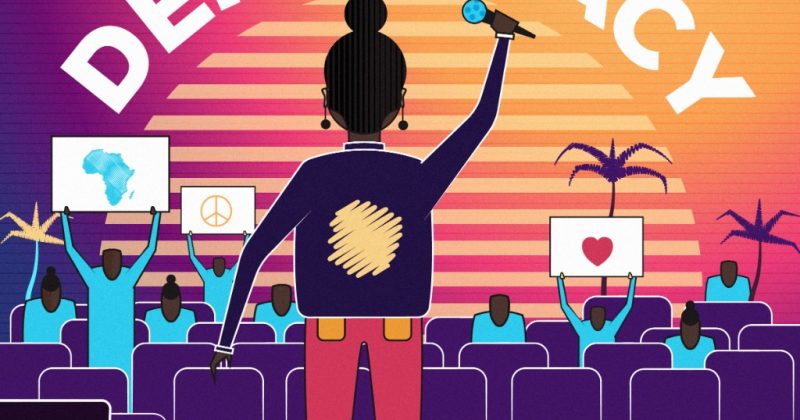 Listen to “Democracy”, a pan-African collaboration about greed, absolute power and corruption

To mark international democracy day this month, YIAGA AFRICA released a hip-hop/rap song “Democracy” on September 15th, in partnership with the Ford Foundation and World Movement for Democracy (WMD), as part of an initiative to support sustainable democracies in Africa.

“Democracy” reflects the experiences and perspective of youths in an Africa where too often, greed, absolute power and corruption is the talk of the day. Through verses delivered by artistes—Moonaya from Senegal, Master Soumy from Mali, Awa Bling and Killa Ace from The Gambia, Cill from Nigeria, and Elom 20ce from Togo—the song is composed as a distinctive blend of French, Wolof, and English. “Democracy” comes off YIAGA AFRICA’s youth project titled, Music as a Messenger for Democracy. The Project’s lead, Ibrahim Faruk, explained via email to NATIVE that the song “awakens the conscience and serves as a reminder that we deserve democracy, freedom and rights—but also we must fight to gain and protect them.”

The song is produced by Waliyaane studio in Senegal, and aims to foster a rebirth; a reawakening in citizens, driven by a vibrant collaboration between African artistes and civil society actors such as YIAGA AFRICA, WMD and Ford Foundation, to counter anti-democracy narratives, advance next generation civic engagement, and build solidarity across West Africa.

Listen to “Democracy” below.

ICYMI: Tekno speaks against the shortcomings of the government on new single, “Better”