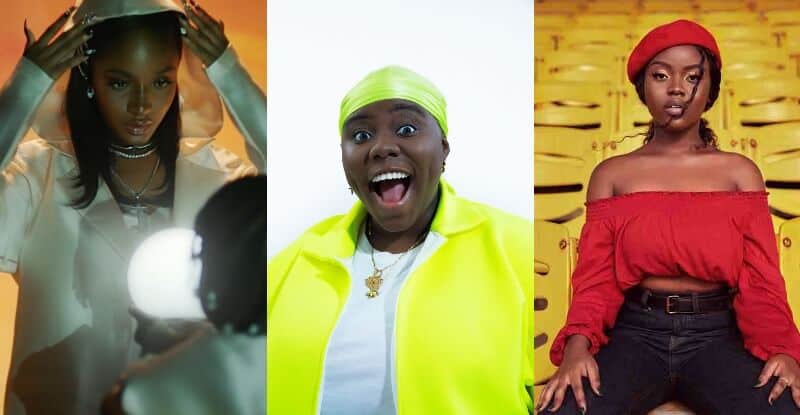 For eleven straight weeks, Omah Lay’s “Godly” made history as the longest charting No. 1 single on the TurnTable Top 50. Putting that run to an end, Teni’s new, Davido-assisted single, “For You”, debuts on this week’s edition of the charts. The new No. 1 also sets a historic milestone, as it’s the first time a song by a female artist debuts and sits at the highest position on the Top 50. “For You” is the second single off Teni’s long-awaited debut album, ‘Wondaland’, and this achievement emboldens the singer’s reputation for playing the mainstream game by her own rules.

Two weeks ago, Ayra Starr initially set the mark for the highest charting song by a female artist in the Top ten, with breakout song “Away” moving to No. 5, a week after debuting five spots below. Having dropped four places in the previous week, the Mavin wunderkind’s hit song has reached a new peak, rising to No. 4 in this week’s edition of the chart. The song’s leap was powered by an increase in radio airplay and TV airplay impressions, both metrics from more traditional sources that indicate the teenage singer’s growing ubiquity. 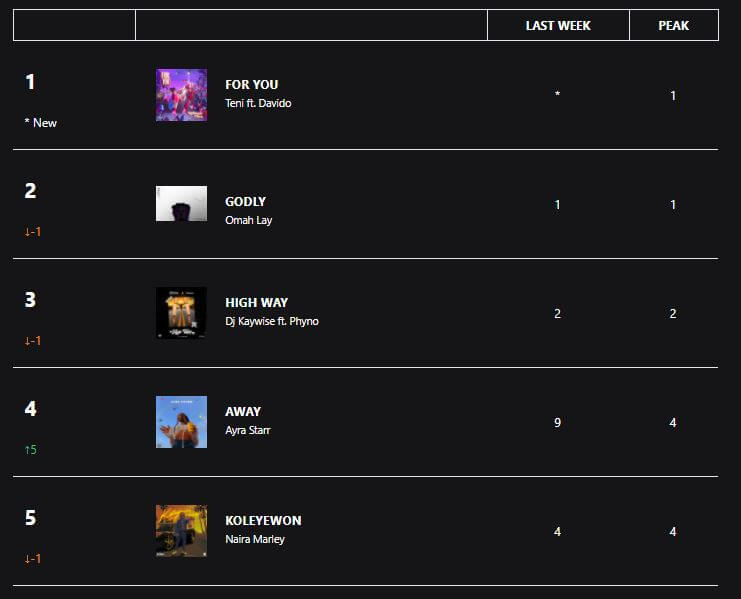 The majority of the top ten remains largely unchanged, with “Godly” only tumbling down one spot to No. 2, as well as DJ Kaywise and Phyno’s “Highway”, which comes in at No. 3 after four consecutive weeks at the second spot. Naira Marley’s “Koleyewon” (No. 5) continues its remarkable run in the top ten, as does Bella Shmurda’s “Cash App”, which drops one spot to No. 6. Wizkid and Burna Boy’s “Ginger”, which set the ball rolling at the top of the charts, holds steady at No. 7, while Davido and Mayorkun’s “The Best” falls six places to No. 9, and “Rush” by Dangbana Republik and Bella Shmurda slips from No. 8 to No. 10.

With their increasingly popular, Omah Lay-assisted jam, “Pronto”, Ajebo Hustlers make their top ten debut, coming in at No. 8. The duo broke out with the ultra-catchy and biting piece of social commentary, “Barawo”, and their latest drop gives stronger indication of their potential for stardom. Outside the top ten, Chike’s “Running (To You)”, featuring Simi, debuts at No. 18, while Joeboy’s “Focus” makes a one spot jump into No. 12. One of the bigger jumps of the week is from Ghanaian singer Gyakie; the Fresh Meat alum’s single, “Forever”, is the first song by a non-Nigerian to reach the top twenty of the Top 50, having climbed from No. 46 to No. 20 on the back of increased streams and radio airplay impressions during the period surrounding Valentine’s Day.

You can see the full rundown of the TurnTable Top 50 here.