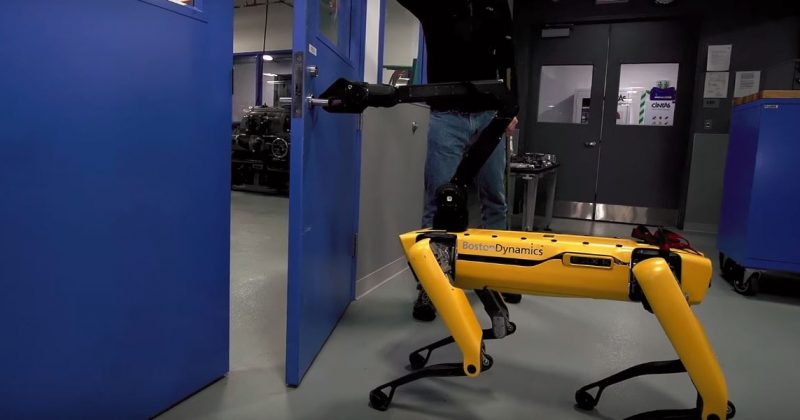 This newly designed robot dog is the stuff of nightmares

One of my most vivid nightmares is running out of a room to escape from a dog that was chasing me. In this nightmare, I locked the door behind me but that didn’t stop the dog. The beast (sorry if you like dogs) tore through the very heavy door—destroying the door—and found it’s way to me. I woke up unharmed because it was just a dream. But an American robotics design company may have developed an alarmingly realistic version of my dream.

Last week, Boston Dynamics showed a video of their SpotMini Robot opening a door for its less equipped friend. On the command of the staff (literally just a ‘go’ signal that is activated automatically), the SpotMini opened a door for an earlier version of itself wasn’t programmed for such niceties. Although both SpotMinis were equipped with four legs and basic robot parts, the newer version has a long trunk with a claw that allows it carryout primate-like hand gestures.

An unsettling video posted by the company today justifies whatever fear you may have picked up from this write-up. The video reveals that there may be a glitch in the design of the SpotMini. It shows a visibly apprehensive human attempting to get in the way of the SpotMini opening the door. First, he tries using a hockey stick before eventually resolving to drag the robot from behind and ripping away parts of it. Yet, as soon as the man lets go, the robot continues on its mission to open that door. To pacify us, the company explained that the testing does not harm the robot—as if that was the biggest worry.

Hey, Boston Dynamics, If you could write an episode of Black Mirror, what would it be about?

If you’ve ever wondered what space sounds like, this playlist by NASA is specially for you

0100
Previous Article Connecting Africa: Niniola and Kagwe’s “Till the End”

Next Article Sade Adu set to drop “Flower of The Universe”, her first release in 8 years.