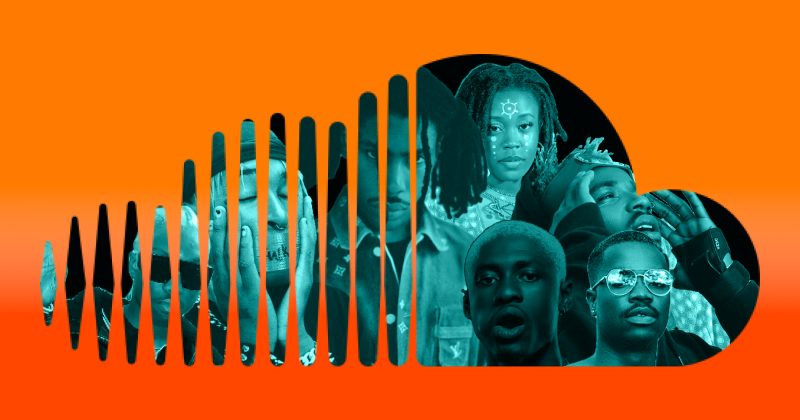 SoundCloud may not be as prominent as it once was, but we should never forget its importance

I remember where I was the first time I listened to Santi’s cult classic tape, ‘Suzie’s Funeral’. In the backseat of a Toyota Sienna, on a trip to Abuja, my friend Timothy sent me a link to the project with an accompanying message, “you should spin this.” At the time, my SoundCloud app was pretty much inactive, but I trusted my friend well enough to wipe those digital cobwebs—and looking back, it was worth it.

There’s music that creeps up on you, and there’s music that hits you like a gale force wind. ‘Suzie’s Funeral’ was both – for one, it was instantly distinct and felt unbound to anything but Santi’s rules. It was intriguing, entertaining and even confounding to varying degrees, depending personal taste. Regardless of where listeners fell on the acceptability spectrum, it was difficult to dismiss ‘Suzie’s Funeral’, and as the tape’s myth began to build in the following weeks and months, it became impossible to ignore.

Within all of the chatter and buzz, Santi’s breakout project was emblematic of SoundCloud’s most essential trait: freedom. In the African mainstream scope where co-opting and conforming to trends is the ideal, freedom has always been a double-edged sword, allowing non-conforming artists to express themselves in whatever form they choose but also limiting their chances at widespread success. With the advent of the SoundCloud trend, the platform became the nexus point for a new generation of boundless creatives to showcase their abilities and build a community of listeners turned ardent supporters.

Like Myspace and Hulkshare before it, discovery was—and still is—an integral part of SoundCloud’s appeal, but its superpower came from becoming the premier platform to emphasise and amplify creative freedom in a way that made it so cool that even the global mainstream had to sit up and take notice. Soundcloud was the launching pad for Bryson Tiller’s rise to stardom, it was integral to the buzz behind the Raider Klan— Smokepurpp and Denzel Curry—and other artists of the ‘SoundCloud Rap’ movement. More popular artists also used the platform as the leak site for (un)official releases, like how Kanye West dropped “No More Parties in L.A”, a single off his 2016 album, solely on SoundCloud at first.

In the African context, it took a while for the mainstream to properly acknowledge what was happening on SoundCloud, but that’s simply because artists who used the platform didn’t start out hunting for that type of validation. The ethos was to make whatever style of music that represented them best, and leverage whatever resources they could muster into growing a formidable fan base. By the end of 2016, there were buzzing projects by Odunsi (the Engine), Lady Donli and Tay Iwar, and 2017 effectively diversified the playing field, with the increased popularity of Ghana’s La Meme Gang, South African rappers Patrickxlee and J Molley, and more.

Currently, the diversity of the music African artists are making is now more apparent in the mainstream, but that widescreen narrative would be incomplete without SoundCloud acting as the buffer for experimentation and growth. Being a totally DIY system, artists could be as experimental with their sounds as they wanted to be, confidently putting out music that would most likely languish in obscurity when traditional media and promotion routes were the only ways to gain any attention. With no bounds on the music that could make its way to SoundCloud, there was no shortage of artists, and being a low barrier streaming platform, there was also no shortage of listeners looking to discover their next favourite song, tape or artist.

One would be right to also describe SoundCloud as the rallying point for a revolution, but what’s a revolution without a resistance? As the movement picked up the pace, there was a lot of unwarranted critique, which mainly stemmed from a perception of privilege and the sheer need for ol’ heads to place these artists in one box. First, it was the derogatory term ‘SoundCloud artists’, then came Alté, but along the way, the artists had already started to carve their own space in the mainstream and SoundCloud’s prominence was beginning to wane.

In July 2017, it was reported that SoundCloud had shut down two of its offices and laid off close to half of its employees. At the time, it looked like it was the beginning of the end, but one outcry and an intervention from Chance the Rapper later, the streaming platform seemed to be doing just fine. You could argue, however, that things began to change irreversibly from that point, as artists started to go directly to the monetised, seemingly more secure streaming services.

Apart from this scare of a closed shop, you can cite two other important factors for this shift. The first is the instrumental role social media now plays in marketing and self-promotion. These days, artists can peddle their links in the digital equivalent of rappers selling their mixtapes out of their trunks, they can virtually interact with their fans and other artists in order to build community, and they can showcase their abilities in short bursts that can go viral and lead to initial momentum they can build off their careers with.

The second factor is that the stakes changed. With its positioning as a freewheeling platform for artistic expression, SoundCloud is a decidedly low stakes platform. While discovery is a part of an artist’s career that’s difficult to overstate, transforming the potential that drew in the first set of supporters into a career on the biggest stage possible comes with a higher stakes. As far as measuring star power, SoundCloud is a few levels below streaming services like Apple Music, Spotify and YouTube, and the artists seemed to understand that perfectly. It’s the reason why Santi’s proper debut LP, ‘Mandy & the Jungle’, got all of its push on those more prominent platforms, even though the album still made its way to SoundCloud, while some artists entirely forgo putting their album on there.

Although SoundCloud is still here, it clearly doesn’t have the same presence it did only two years ago. Just last week, the pioneering quartet L.O.S came back with a new EP, ‘The Tribe’, which I found out about via SoundCloud, but had to confirm validity from whether it was on other streaming platforms. In addition, its low numbers (by L.O.S) on the platform is proof that listeners have clearly migrated. In the same breath, young artists like ICTOOICY use their SoundCloud page as the place for frequent releases, conversations around the fast-rising poet with a flow have centred on her Apple Music chart conquests, showing where the major metric for budding stardom now lies.

Those who still use SoundCloud regularly know that there’s still good music and artists being discovered, but for those who don’t, the streaming service is a throwback to simpler times when the thrill of discovery was still a big thing. Regardless of which side you’re on, SoundCloud’s importance and impact on African and global music is indisputable. Whether it resurges back to its previous level of relevance or remains in its current rhythm, it would be particularly painful if the same fate that befell Myspace befalls a platform that’s integral to the musical identity of an entire generation.

SoundCloud and the thousands of memories and magnitude of talent it helped create shouldn’t be allowed to die.

ICYMI: BEBE ZAHARA BENET IS ON A MISSION TO BRIDGE THE GAP BETWEEN HER TWO WORLDS