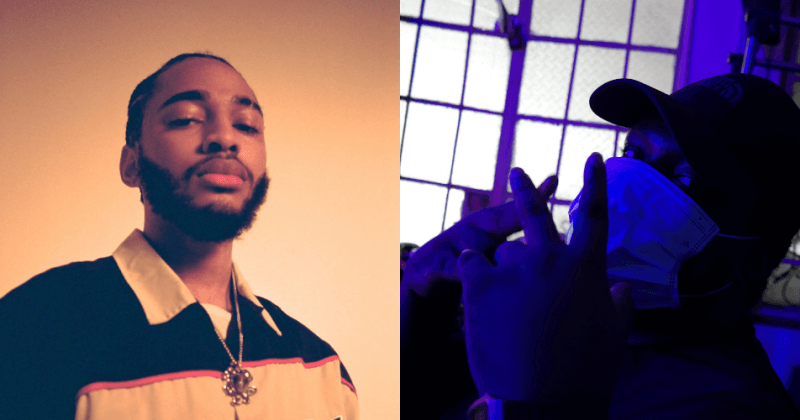 Collaboration is one of the most important elements of music making. Right from orchestral compositions to modern-day artist/producer collabs, working with others always has a way of elevating the music making process. Rising musicians, Na-Ku and Trill Xoe – who air their latest collaboration, “8am in Lekki” with us tonight – view collaboration as one of their biggest assets.

Singer/rapper, Na-Ku and producer, Trill Xoe, have been collaborating with each other for a while; “Trill has been with me since the beginning… I wouldn’t be here if it wasn’t for Trill,” Na-Ku tells me. So fond are they of working with others that they even have a group chat of like-minded creatives, including Davis who designed the poster, and it was in this creative mecca that “8am in Lekki” was born, just three weeks ago.

Producing the beat during one of the many rough patches this year has thrown at all of us, Trill Xoe shared “8am in Lekki” (which was almost called “8am in Lagos”) with his group chat, and instantly, Na-Ku gravitated towards the song, laying down vulnerable vocals that reflected Trill’s state of mind when making the beat.

Over the slow tempo track, Na-Ku opens up about a love gone sour, because his partner is going through it and projecting their pain into the relationship, as opposed to communicating and laying all things bare. “Say you’re fine but I do not believe ya,” Na-Ku sings, pointing at the mistake, we all make, of denying anything is wrong, when the opposite is blatantly true, because we wish to be strong. Speaking as the person wounded by the understandable dishonesty, Na-Ku’s melodic rap freestyle finds a way to be relatable from both perspectives.

Emotionally mature and honest, Na-Ku’s performance makes a sound accompaniment to Trill Xoe’s pensive beats, lined with shakers and light tinkers that add a spark of hope to the melancholy notes. As the song reaches its final minute, Trill Xoe’s beat is given a lot of space to shine, lulling listeners out, soothing, yet somber.

In advance of the single, NATIVE had the opportunity to speak to the rising artists about the new collaboration, and their plans for the future, in light of the fact that they have both come off the back of an extended musical break. Read below:

Interestingly, both of you have had long breaks before this last quarter, why did you decide to press pause on release music then?

Na-Ku: The hiatus wasn’t voluntary. If I could have not been on a break I would choose to do that, but some things were just happening in my life and I couldn’t make music for a while. It was just circumstance. If there’s anything about my journey so far that I regret the most, it’s that – that wasn’t part of my plan, I feel like it’s been really really a hindrance, but we’ll see what happens in the future.

I’ve planned my releases for next year. Compared to what I’ve dropped so far, everything from now is planned, it will be more strategic. I have basically just set myself up for the near future.

Trill Xoe: I didn’t want to drop music because I don’t really like promo, I don’t like working on those things, so I just said ‘you know what? I’m not dropping music.’ The last song I dropped was in 2018, so I took a two-year break. Then I came back, dropped “How To Act”. That song just came spontaneously, it’s one of those songs that I just felt, ‘this needs to be out.’ So now, I can take another break and just work on other people’s stuff, because I just really don’t like working on promo and everything, so that’s why I don’t drop music regularly.

N: The thing about break is, if you’re not already established, if you [fail to] put yourself out there for long enough, you risk being forgotten or starting over again, and that’s long.

T: But I mean, if you love the music you’ll just be like *shrug*

You are part of a group chat of creatives who all work together on the art, why is collaboration so important to you?

Na-Ku: Working with other people is great. With artists, for example, there are a lot of artists that I really want to work with, but we just don’t have the time or the songs to work on with other people. That sucks but it’s fine, when it’s meant to be, it will be. I recently started producing and collaborations are actually the only thing that’s really helping me, besides YouTube. Collaborations are really helping me make myself a better musician, because now – besides recording, being a rapper and singer – now I’m a producer. I’m not a producer like Trill [Xoe], but I’m getting there.

What did you learn from each other from this collaboration?

Trill Xoe: Na-Ku’s range. This is the first time he’s doing something like this.

T: No, this one is different because there’s a slower tempo, the vibes [are different]. I feel like I learned his range, and [how to] push the guy. I didn’t even expect this; I just sent the beat because I was sad and I just sent it to the group chat. I know he can do a lot but when I heard the freestyle I was [speechless].  It’s been really amazing working on this song with this guy

N: Me, what I learned is that we work very well together, because that was fantastic. It was a really nice process.

Next Article For Us By Us: Living as a non-binary person in Nigeria