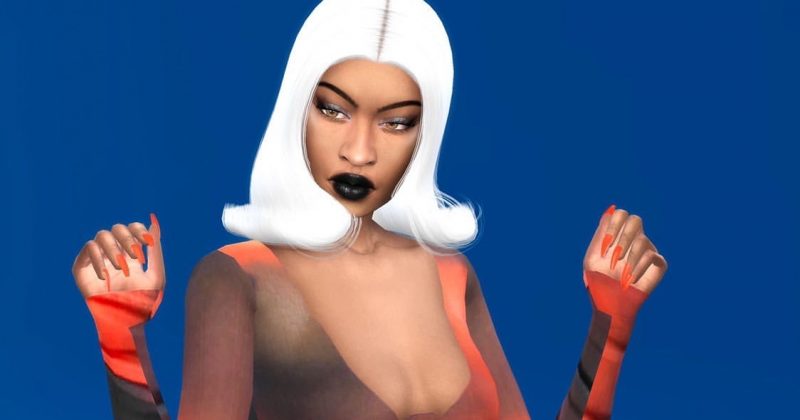 Meet Eno, the visual architect turning everyone into Sims

who wants their sims in @MOWALOLA_ pic.twitter.com/vtO6nOTa7m

Ahead of the release of his surprise EP, Everything You Heard Is True, Odunsi (The Engine) teased the only record off the striking new tape that we were given any advance warning to expect. The “body count” teaser video depicted  Odunsi, DETO BLACK, Amaarae and Gigi Atlantis – the song’s fiery quartet – getting down to their infectious groove… as SIMS!

Watching them strike character-defining poses and break out sensuous moves in the “body count” teaser animated the 20-second clip beyond the affordances of the lively song itself. Much like visuals of inebriated moshpits that surrounded the cries for the long-awaited “wicked, sexy!”, “body count”‘s badass Sims figures added to the allure of the song. Thankfully, we didn’t have to wait too long before the song’s official release, which was accompanied by more performances from DETO BLACK’s and Amaarae’s Sims.

“body count” is a sexually liberating track upon which Gigi Atlantis, Amaarae and DETO BLACK encourage women to defy cultural mores and appease their sexual appetite. Empowering women in more than one way, “body count” sees The Girls run the show, not only the vocalisers on the track (or Mowalola who styles them) but also the 18-year-old Sims enthusiast responsible for the digital depictions. Eno, whose role it was to illustrate the sexy body bouncing which Gigi chants over the hook, is a young Nigerian girl who lives within a society that permits everybody but the woman herself to sexualise the female form, so of course “body count” was deeper than her professional debut:

“The song starts with the chorus and when I heard it I was like “ah cool.” But once I heard Amaarae say “big d*ck for me” I REWINDED ’cause knew the song was gonna be super sexy, and the chorus hits different when you realise that. I smiled throughout, I felt empowered. Aunties need reminding, I’m actually a bad bitch.”

With her first-ever commission as a digital artist entering the top ten on Nigeria’s Apple Music charts within hours, Eno’s bad bitchery is now indisputable (just like D BLACK’s, another artist who made her debut on the record and the wordsmith of the bar Eno references: “Tell those aunties I’m a bad bitch”). This instantly prosperous collaboration with Nigerian music and fashion powerhouses is a start many creatives would strategise for months for, but for Eno this moment was simply a happy by-product of her creative hobby and perfect timing.

“I made the Odunsi Sim for fun, sent it to a friend, they loved it & said Odunsi was actually looking for something similar to tease new music with. [Odunsi] then put me in contact with [Mowalola] and we worked together on the styling.”

The Odunsi Sim wasn’t Eno’s first time recreating a celebrity figure in her Sims utopia, where every beautiful face she spots in real life has the potential to be replicated. Rihanna and Beyoncé are two other Simed singers which Eno shares with me.

“I’m sort of obsessed with making the game as realistic as possible. I actually made an Instagram for [my Beyoncé Sim] but it got deleted [for] impersonation” 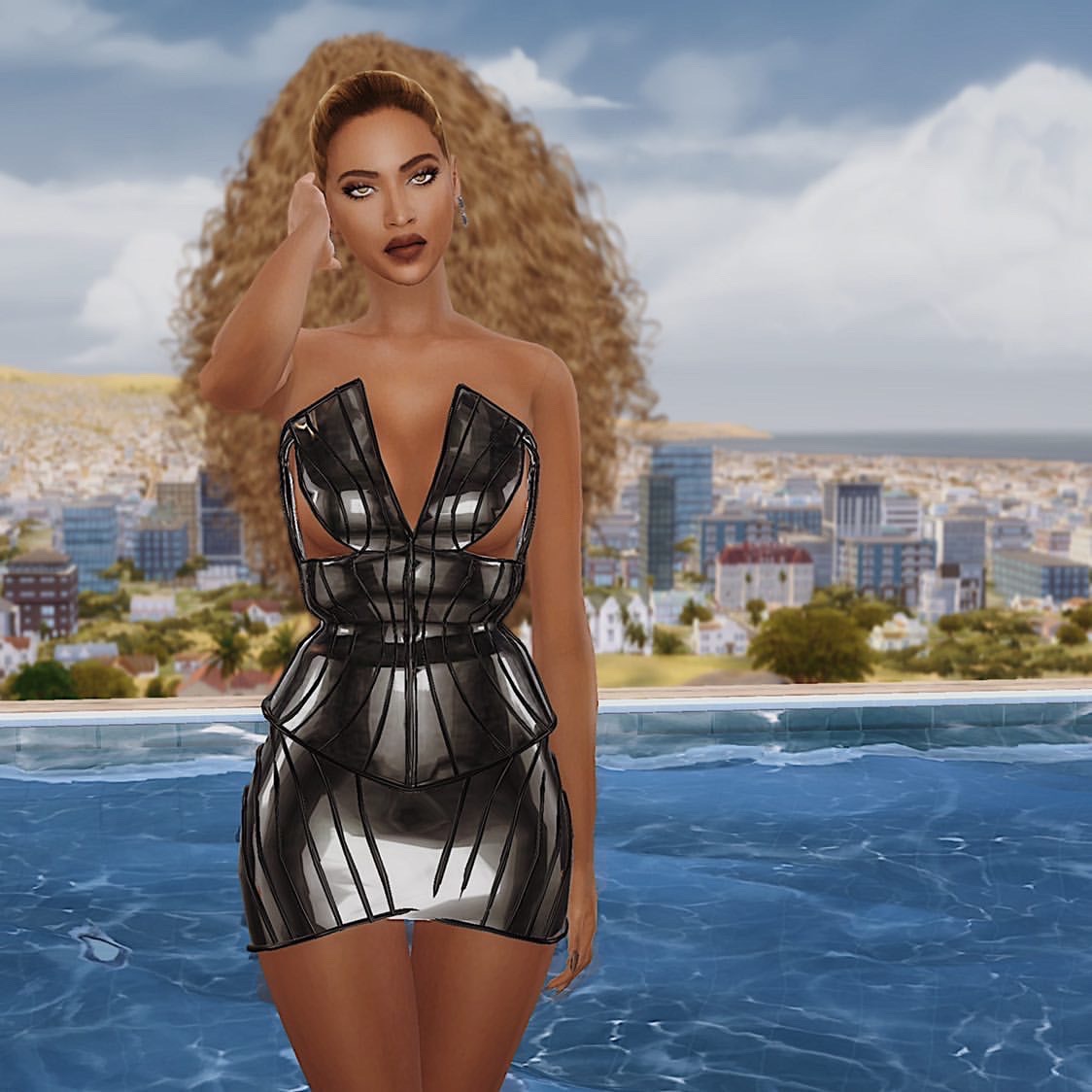 Not only do the likenesses resemble their muses, but everything from DETO BLACK’s assertive dance moves to Odunsi’s photogenic poses bear similarities to the IRL characters – including their fashion choices. Eno’s desire to achieve the most detailed rendering of her subjects led to some quality time with the creative junkie behind the eponymous brand, MOWALOLA, perfecting the familiar ‘fits we see her Sims model in the “body count” teaser shots. Eno tells me of the long-winded process required to self-style your Sims beyond the game’s stock: saying

“To put it simply, to make your own looks this is, you have to create your own “mesh” (which is like a skeleton for the item of clothing) and put colour on it. There’s an abundance of creators online so I think you can really get whatever look you want. I think the game could be limitless, with the right modding”

Though she’s also got pursuing her degree on her plate, Eno is still determined to test the Sims game’s limits, as she looks to flip this hobby into a career. For many of us youngins, Sims was a recreational part of our childhood, to some degree or another, and for Eno, it was to a great degree.

“I used to play a lot of the Sims when I was younger, but the game fell off heavily so I’m just into dress-up. That morphed into pretty successful attempts at making celebrities on the game, then objects, clothes etc.” 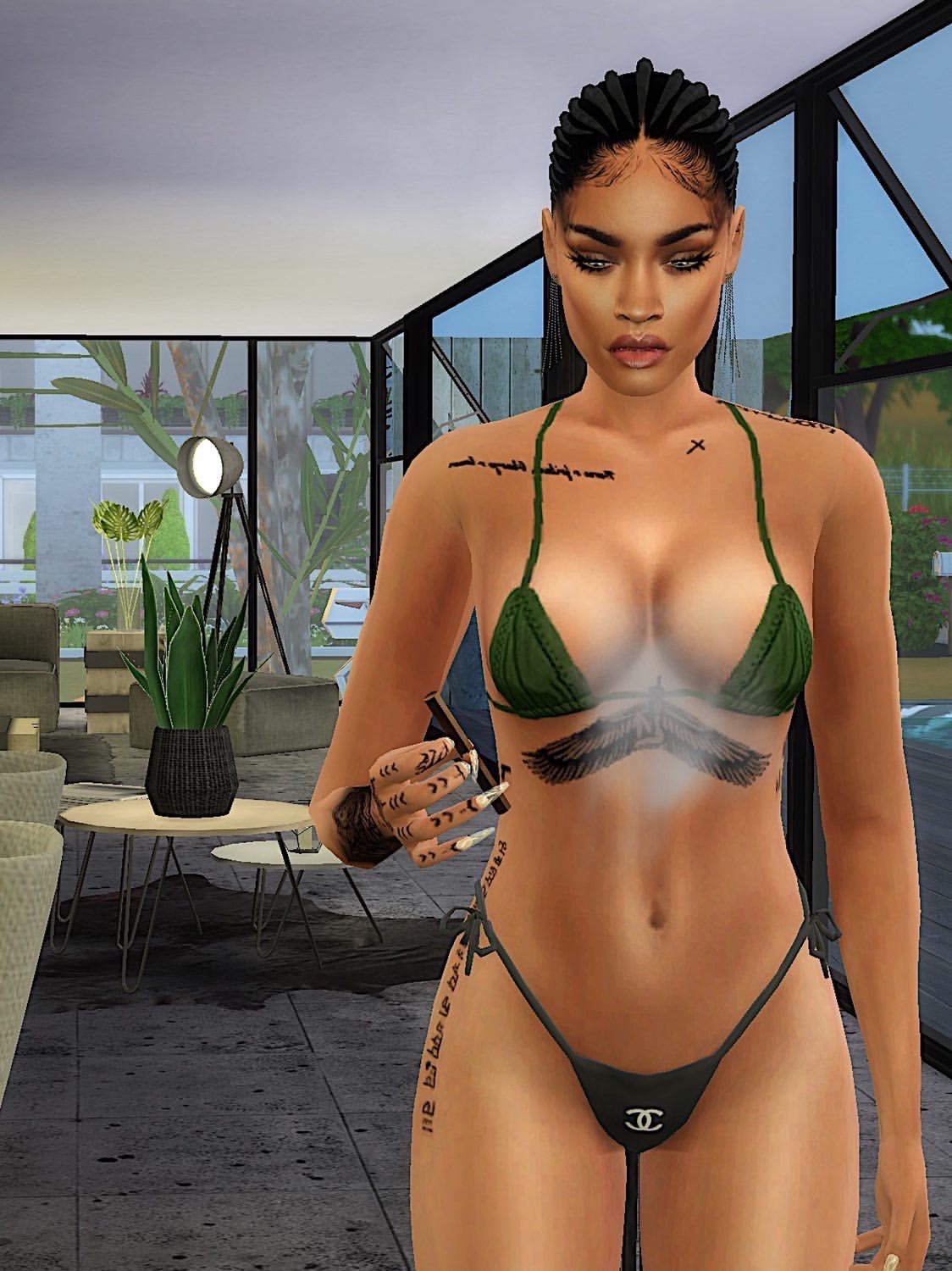 Although she’s still learning how to use the software, by finally putting her name to her work with these “body count” clips, Eno is now ready to take on the difficulty that comes with managing university deadlines alongside a freelance career. A struggle all too familiar for young creatives these days, Eno assures me that she is prepared for the workload to come, and wouldn’t have it any other way.

Eno is so confident her ability to replicate reality – or at least real people – that she’s considering an entirely virtual Instagram presence, creating a Sim for herself who, in her world, can interact with Beyoncé, Rihanna, Gigi Atlantis, and all the other digital avatars to come. And it won’t just be Eno who’s got a virtual presence roaming around the digital world – she thinks Sims and avatars are going to become mainstays on social media. Given the current state of affairs, where physical contact is all but prohibited, it doesn’t seem at all like a far fetched reality that avatars similar to the characters Eno creates will become our proxy for social interaction. In fact, Odunsi commissioning Eno’s Sims for the “body count” teasers – a direct reflection of how the times are pushing artists towards more imaginative visuals – is an early indication of what the (distant) future may hold.

“Though I don’t feel it’ll start with the virtual presence as a person like Lil Miquela, I honestly think brands will gravitate towards using 3D models. I know I would! And if the models are unique – or just conventionally attractive – enough they may have their own individual online presences.

I’m thinking really far [ahead]; I do think I’m gonna see more of this in the future [though]. Virtual artists, it’s our time! Even though I’m a full beginner, if you’re reading this come & teach me, let’s make bank!” 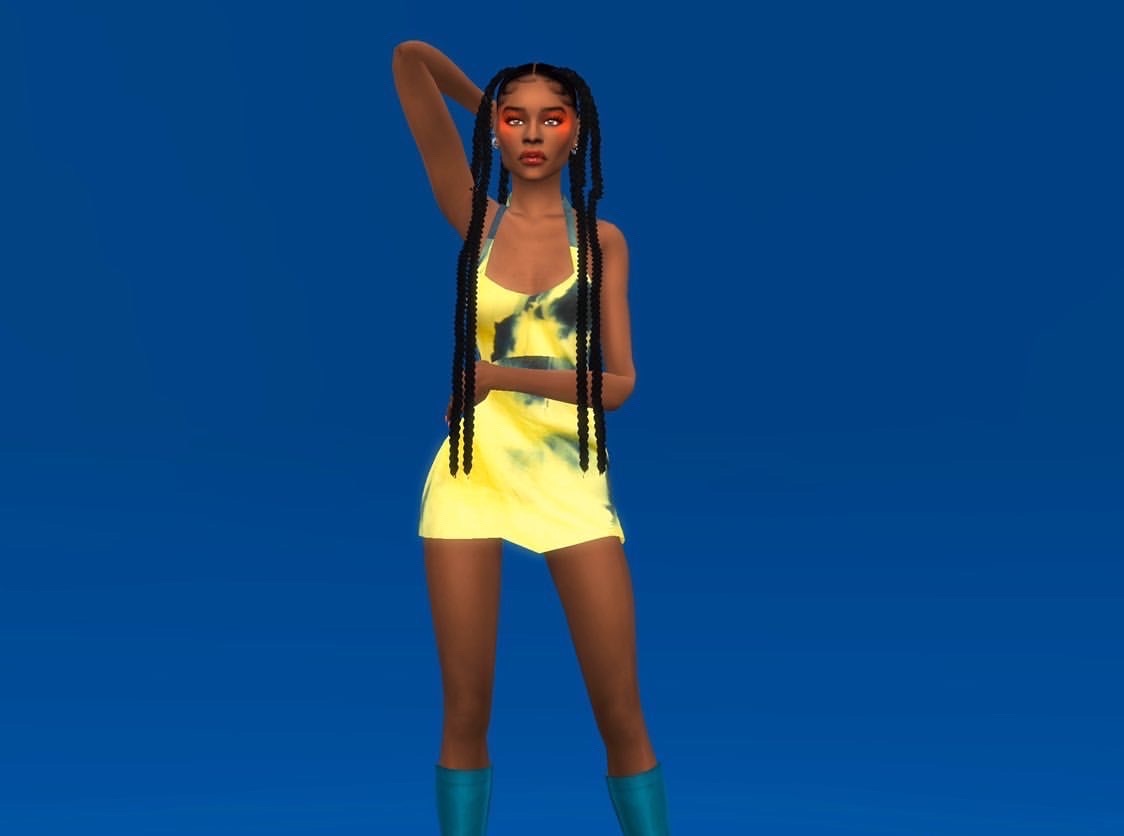 Lil Miquela is a Brazilian-American virtual influencer created by Trevor McFreddies (you may but probably don’t know him as Yung Skeeter) and Sara DeCou for their ‘transmedia’ digital studio, BRUD. Boasting endorsements from Prada and Calvin Klein, and an active music career, she recently released two singles featuring Teyana Taylor, Miquela’s popularity and access has been the subject of much controversy since she grew into stardom.

Last year she, and her co-creators, received backlash for her first-person narrative account of being touched inappropriately in the back of a car. A completely fictional event (because she’s only real in the digital sphere) Miquela’s video seemed insensitive, tone-deaf and inconsiderate of the many real victims for whom sexual harassment and assault is not just a story to register outrage, but an actual traumatic event. In 2018, Dominic Cadogan and Kemi Alemoru addressed the topic of Lil Miquela’s modelling/influencing career sidelining actual models of colour. Kemi Alemoru argued that along with other virtual characters, Shudu and Nfon, Miquela’s presence was enabling companies to capitalise on ‘POC aesthetics’ whilst at the same time marginalising people of colour. It’s this incendiary practice of profiteering, which is inherent in capitalism that leaves Eno disillusioned.

“I want to see more virtual presences. Although, because of capitalism I question whether I actually want that, because even now there are white artists who profit off of their black/POC 3D models and that honestly makes me uncomfortable. Not because of who they’ve chosen to create, as art is subjective, but it’s the profit part.

I feel only black people should be able to do that [profit] off black culture, and our features are a part of the culture. [Virtual characters] will probably become exploitative, as everything eventually does.”

Independently of human (ab)use, technologies don’t actually pose a threat to us (think: ‘guns don’t kill people’), however, it is possible to propagate societal shortcomings through technologies by weaving inequalities into the fabric of what we create online. Eno is distancing herself from that world, and her interest in virtual reality hardly extends beyond Sims and IVMU – another online gaming metaverse. Her characters are based on real-life people, so whatever profit she attains from her passion always comes with the consent and approval of her subjects. Eno has no desire for capitalistic exploitation, she simply wants to reimagine the beauty she witnesses in her everyday life through her own digital lens.

“No matter how “real” I want my Sims to look, I’m still creating my own fantasy. It’s a form of expression that I feel everyone should enjoy.“